Strange is the fate of the poet Baudelaire: in his own time he was neither understood nor accepted, and was renowned the least. But as time passed, so his poetry became ever more influential.

From it sprouted symbolism. It seemed that he reached the zenith of his fame at that time through his followers Mallarme, Verlaine, Rimbaud, Apollinaire and Breton. That wasn’t the case. As time goes on, Baudelaire becomes increasingly famous. His rise does not cease, his currentness is timeless. Andre Žid was undoubtedly correct when he said: “Fashion passes, critics likewise, while Baudelaire remains” (Jovan Hristić).

The son of Joseph-François Baudelaire and Caroline Archimbault-Dufays, Charles Baudelaire was born in Paris on 9th April 1821. Baudelaire’s father, who was his mother’s senior by thirty years, died when the poet was just six. Baudelaire was very close to his mother (much of what is known of his later life comes from letters that he wrote to her), but was deeply distressed when she married Major Jacques Aupick.

The family moved to Lyon in 1833, where Baudelaire attended a military boarding school. He was kicked out of the school shortly before graduation for refusing to give up a note passed to him by a classmate. Baudelaire spent the next two years living in the Latin Quarter of Paris, pursuing a career as a writer and accumulating debt. It is also believed that he contracted syphilis around this time.

In 1841 his parents sent him to India by ship, hoping the experience would help reform his bohemian urges. He left the ship, however, and returned to Paris in 1842. Upon returning, he received a large inheritance, which allowed him to live the life of a Parisian dandy. He developed a love for clothing and spent his days in the art galleries and cafes of Paris. He experimented with drugs, such as hashish and opium. He fell in love with Jeanne Duval, who inspired the Black Venus section of Les Fleurs du mal. By 1844, he had spent nearly half of his inheritance. His family won a court order that appointed a lawyer to manage Baudelaire’s fortune and pay him a small “allowance” for the rest of his life.

To supplement his income, Baudelaire wrote art criticism, essays and reviews for various journals. His early criticism of contemporary French painters, such as Eugene Delacroix and Gustave Courbet, earned him a reputation as a discriminating if idiosyncratic critic. He published the autobiographical novella La Fanfarlo in 1847. His first published poetry also began to appear in journals in the mid-1840s. He published translations of the works of Edgar Allan Poe, whom he dubbed a “twin soul”, in 1854 and 1855, with the translations being widely acclaimed.

Writers such as Stephane Mallarmé, Paul Verlaine and Arthur Rimbaud claimed him as a predecessor. His works were celebrated in the 20th century by thinkers and artists as diverse as Jean-Paul Sartre, Walter Benjamin, Robert Lowell and Seamus Heaney

In 1857, Auguste Poulet-Malassis published the first edition of Les Fleurs du mal. Baudelaire was so concerned with the print quality that he took a room near the press to help supervise the book’s production. Six of the poems, which described lesbian love and vampires, were condemned as obscene by the Public Safety section of the French Interior Ministry. The ban on these poems was not lifted in France until 1949. In 1861, Baudelaire added 35 new poems to the collection. Les Fleurs du mal afforded Baudelaire a degree of notoriety; writers such as Gustave Flaubert and Victor Hugo wrote in praise of the poems. Flaubert wrote to Baudelaire claiming, “You have found a way to inject new life into Romanticism. You are unlike anyone else [which is the most important quality].”

Unlike earlier Romantics, Baudelaire looked to the urban life of Paris for inspiration. He argued that art must create beauty from even the most depraved or “non-poetic” of situations. 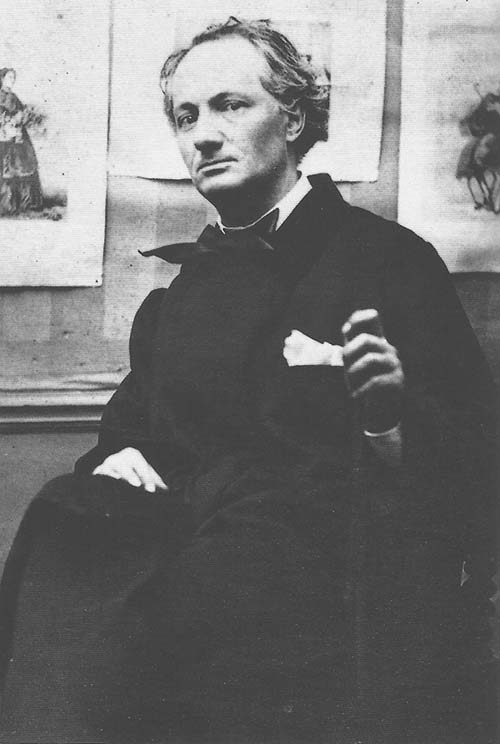 Les Fleurs du mal, with its explicit sexual content and juxtapositions of urban beauty and decay, only added to Baudelaire’s reputation as a poéte maudit (cursed poet). Baudelaire enhanced this reputation by flaunting his eccentricities; for instance, he once asked a friend in the middle of a conversation “wouldn’t it be agreeable to take a bath with me?” Because of the abundance of stories about the poet, it is difficult to differentiate fact from fiction.

Baudelaire continued to write articles and essays on a wide range of subjects and figures throughout the 1860s. He was also publishing prose poems, which were posthumously collected in 1869 as Petits poémes en prose (Little Poems in Prose). By calling these non-metrical compositions poems, Baudelaire was the first poet to make a radical break with the form of verse.

Baudelaire began suffering from nightmares and experienced increasingly poor health in 1862. He left Paris for Brussels in 1863 to give a series of lectures, but suffered from several strokes that resulted in partial paralysis. On 31st August 1867, at the age of 46, Charles Baudelaire died in Paris. Although doctors at the time didn’t mention it, it is likely that syphilis caused his final illness. His reputation as poet at that time was secure; writers such as Stephane Mallarmé, Paul Verlaine and Arthur Rimbaud claimed him as a predecessor. His works were celebrated in the 20th century by thinkers and artists as diverse as Jean-Paul Sartre, Walter Benjamin, Robert Lowell and Seamus Heaney.
Baudelaire’s poetry left a legacy of conciseness and perfection of form, precision and symbolism of language, special rhythm and musicality of verse, a gloomy experience of the world and pessimism.

Synesthesia, that most beautiful and richest metaphor, was created in this poetry.