10 Things You Should Know About Aboriginal Art

Art cavings found in the Northern Territory’s Arnhem Land dates back at least 60,000 years. Using soil and rocks, artists are able to produce carvings, ground designs and paintings. Here, we explore everything you need to know about Aboriginal Art.

In 2007 iconic Aboriginal artist Clifford Possum Tjapaltjrri sold his painting Warlugulong to the National Gallery of Australia for an astounding $2.4 million. Only two months prior, Emily Kame Kngwarreye had sold her work Earth’s Creation to a private buyer for $1.56 million, a record for any Australian female artist. To understand Aboriginal art, you first have to understand its symbolism, iconography and meticulous rules.

It seems obvious, but Aboriginal art is only considered Aboriginal if painted by someone who is of that origin. A non-Indigenous Australian does not have the authority to paint an Aboriginal piece of artwork. Where the artist comes from will inform how the painting will look. Since a non-Indigenous artist is not from a particular tribe, that person cannot represent any form of Aboriginal art. But this does not mean that all other ethnicities are banned from creating their own artwork. 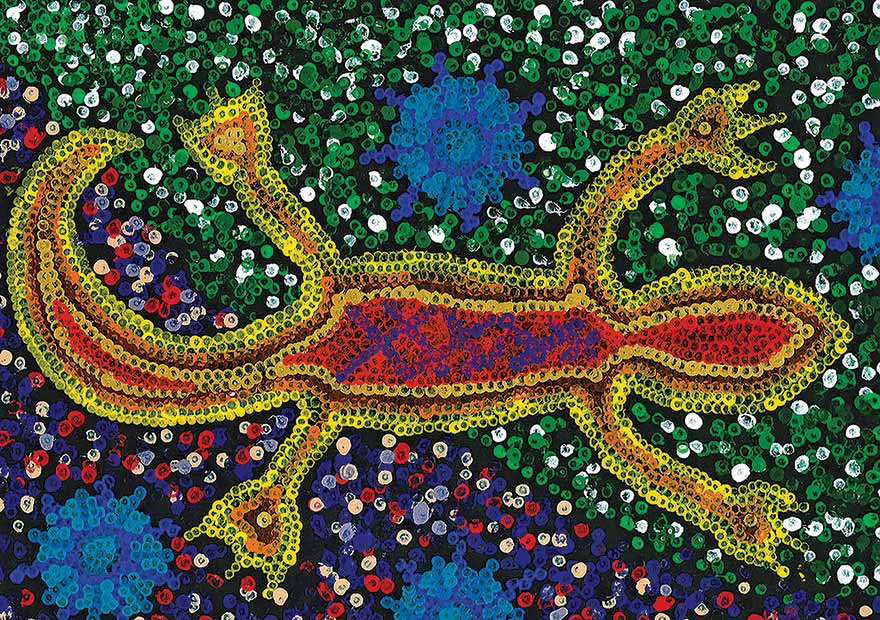 Dot painting originated from the time of white settlement when they feared non-Indigenous people could understand secret knowledge held by the Aboriginal people. Double-dotting obscured any form of meaning but was still discernible to Aboriginals. It has now become one of the most well-known style techniques, particularly from the Western Australian tribe, Pintupi.

Aboriginal art requires its own education. There is an abundance of knowledge that must be learnt before engaging with a piece of Aboriginal art. Most Australians and tourists might think it is just dots and fine lines. This is a myth. Only artists from certain tribes are allowed to adopt the dot technique. Where the artist comes from and what culture has informed his/her’s tribe will depend on what technique can be used. It is considered both disrespectful and unacceptable to paint on behalf of someone else’s culture. It is simply not permitted. For example, the Kulin Nation, which encompasses five different tribes, may not be allowed to use the dotting technique as it is not in their tribe’s culture, but they can use a technique such as cross-hatching. 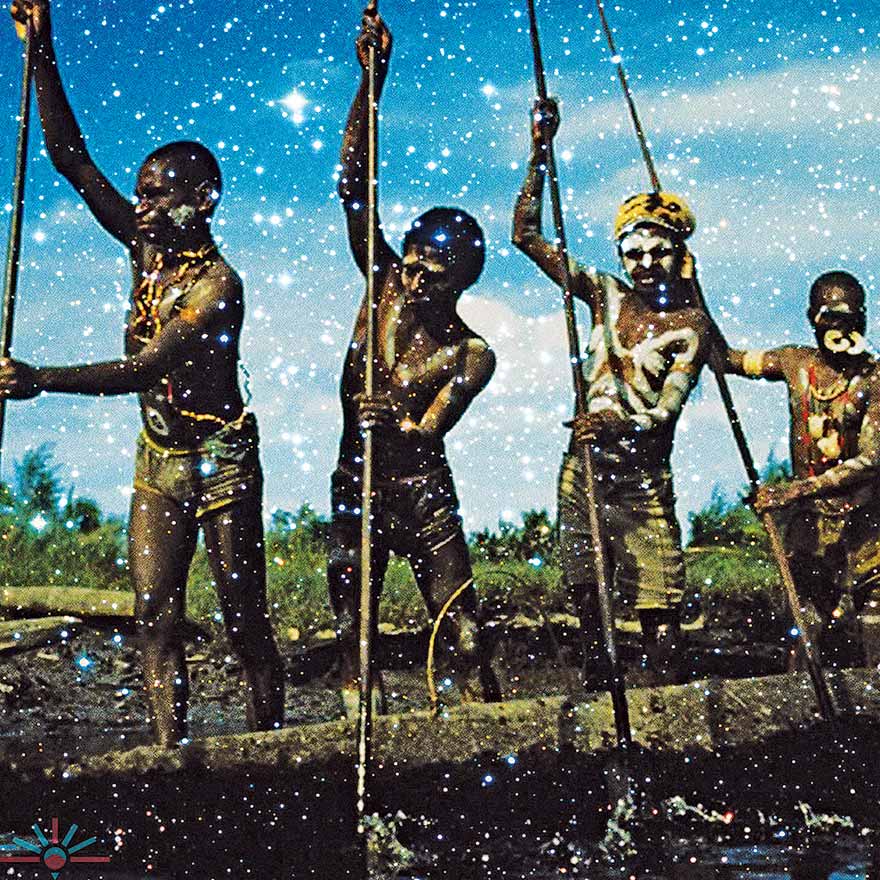 EACH ARTIST HAS THEIR OWN STORY TO TELL

All Aboriginal artwork tells a story. Most art is based on the artist’s individual journey, which may be about their parents, adoption, warriors or daily life chores such as fishing. In rarer cases, the art is reflective of their tribe or captures the heartache of the stolen generation.

Artists need permission to paint a particular story Aboriginal artists cannot paint a story that is not from their lineage. If they are seeking to paint a story concerning historical or sacred information, they must be given permission before they can proceed. It is important that each artist sticks to the stories and artistic techniques born from their tribe. 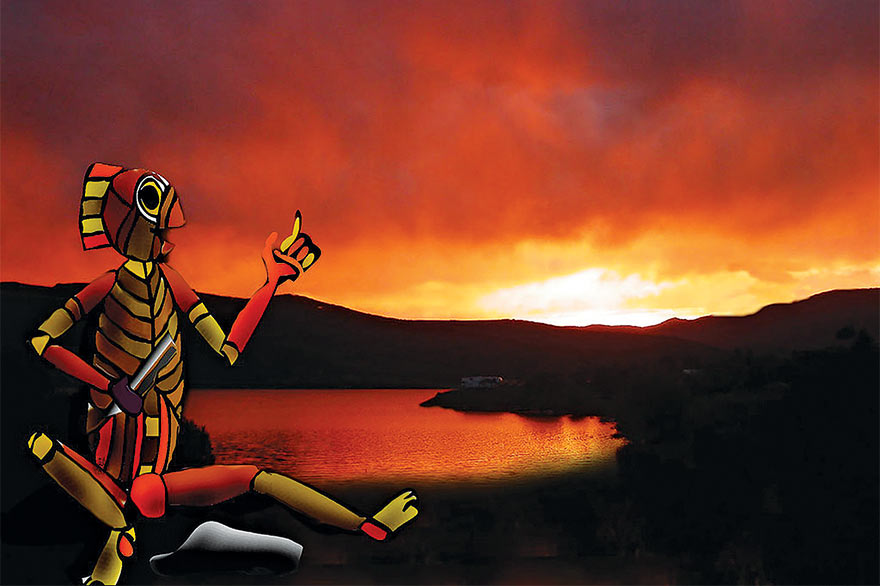 ABORIGINAL PEOPLE DO NOT HAVE A WRITTEN LANGUAGE

Some artwork speaks in the English language, with words and phrases such as ‘stolen land’, ‘racism still exists’ and ‘everything stolen’, for example. This is due to the fact that Aboriginals do not have a formal written language. The artwork is very central to Aboriginal culture because it is a visual story. Without words to communicate, pictures take its place. Aboriginal languages in spoken form do not exist like they once did either. Each tribe has a dif ferent dialect; therefore, each artist has a different story. There are about 500 different Aboriginal languages; so, no two Aboriginal artworks are ever the same, and it comes as no surprise that there are so many varieties of techniques. It is a reflection of the individual artist.

SYMBOLS ARE CENTRAL TO ABORIGINAL ART

As Aboriginal artwork is a form of visual storytelling, each tribe has symbols that relate to meaning. There are iconic symbols too, which are relevant to multiple tribes and include eagle feet, waterholes and digging sticks. Colours can be linked to meaning as well, but this is rare, and only some tribes can understand what colours relate to which meaning. Blue tones (to represent the ocean) and warm tones of brown and orange (to represent the earth) are most commonly used. The symbols can also be used for teaching purposes, catering to both children and adults. Depending on the audience, each piece of iconography will differ in meaning, but the essence of the story will be the same. 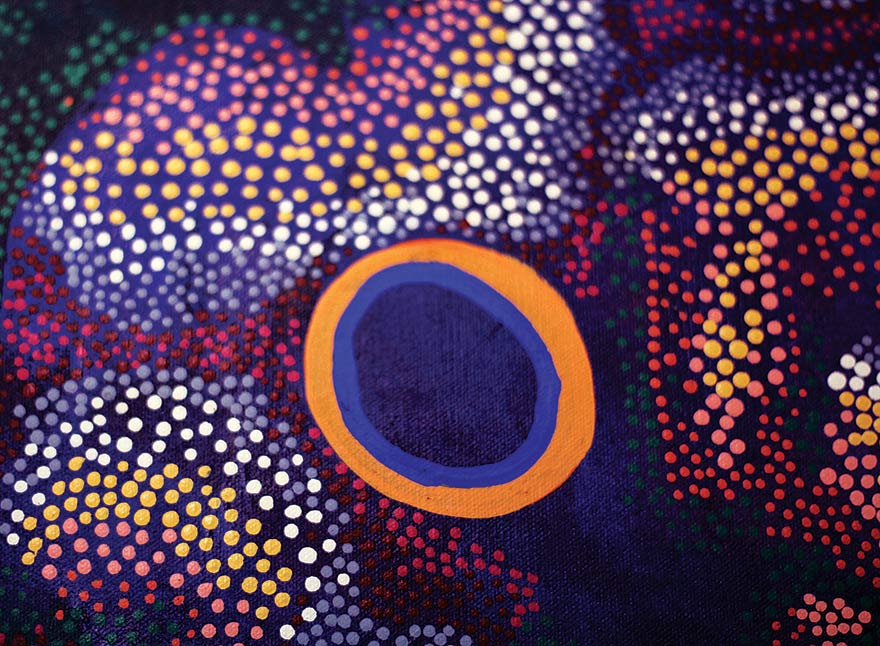 ABORIGINAL ART HAS A MEANING FOR DIFFERENT AUDIENCES

Like art, Aboriginal language has a multitude of layers, each speaking to a different audience. The first initial layer speaks to the public or children in basic form; the second level is directed to the general audience, mainly adults; and the last and deepest level speaks on a spiritual or ceremonial level. As an Aboriginal artist, one must comprehend all three levels to portray the visual story in its most detailed form. 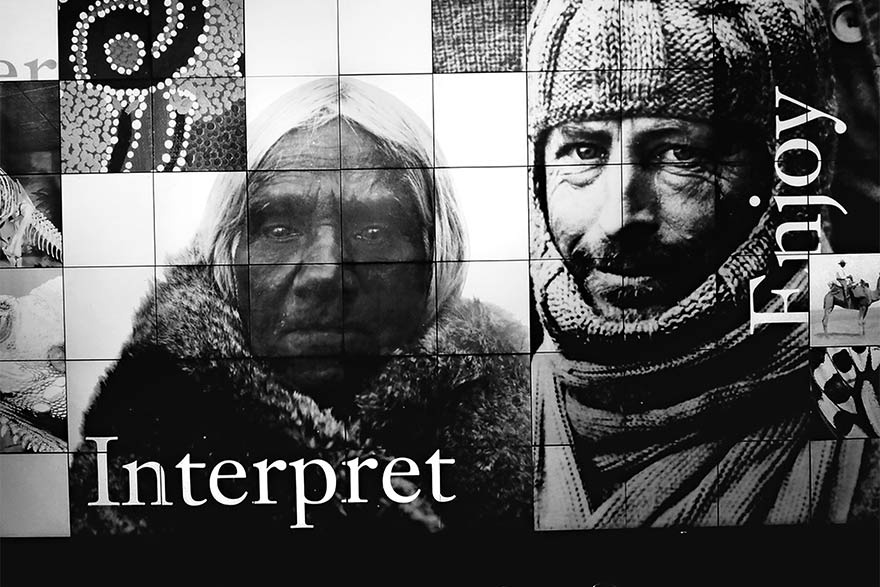 ABORIGINAL ART IS NOT REDUCED TO PAINTINGS

Even though most Aboriginal art is in the form of painting, there are many pieces of art created using other media. For example, there is a high demand at the moment for monoprints, which are single prints using natural rock sediments such as ochre (pronounced oak-er) and acrylic oils mostly. For example, artist Dan Kelly, on the Mornington Peninsula in Melbourne, likes to burn symbols onto wood to create his artwork. Other wooden artwork includes weaponry, boomerangs and plates. 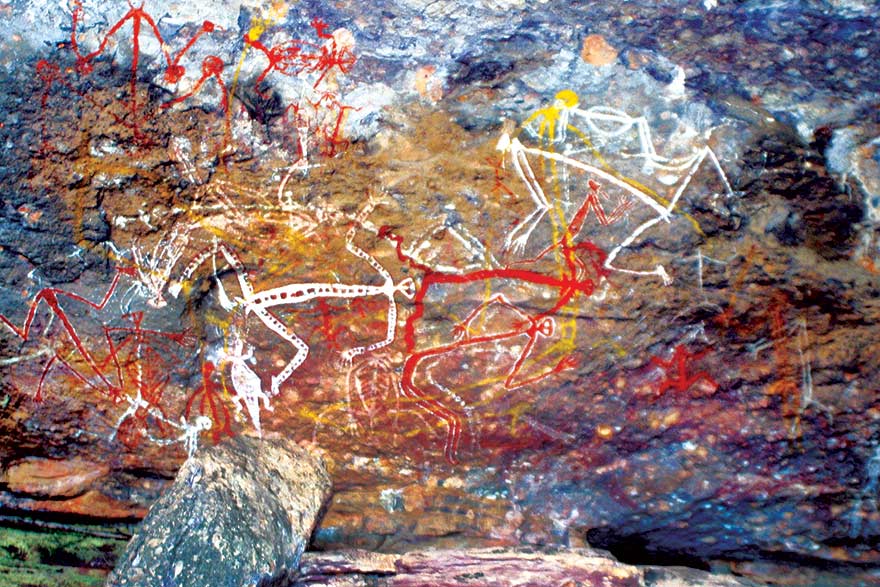 In Australia, most primary schools learn the basics of Aboriginal art. One of the most common Aboriginal art symbols is U-shape, which means person. Where did this meaning come from? Artwork pre-white settlement, and even during settlement, mostly took place in the sand. When a person sits in the sand and then stands up, they leave a U-shape imprint. This is the theory most adopted from galleries and museums.