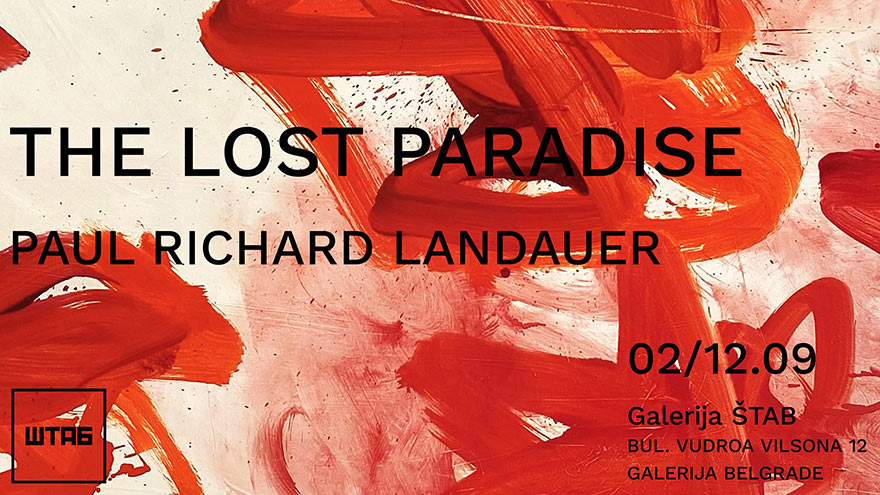 Austrian artist, Paul Richard Landauer, is presenting a series of art works to the Belgrade audience, cleverly placing them in a common context. In the circumstances of a heterogeneous contemporary art scene, this visual artist remains consistent with his recognisable abstract visual expression and initial ideas, striving to show the continuous transformation of his own visual existence.

Landauer repeatedly and deliberately chooses large-format canvases whose space is in itself challenging for the development of visual expression. Albeit prone to expression through various artistic media (directing, photography), Paul has turned to painting over the course of recent years, as the most effective means of achieving clarity, purity, primordial vibrations and purification of his own being. During his artistic creation, Landauer mostly uses oil and acrylic on canvas, occasionally making a step beyond the expected, thus opting for gouache, gold leaves and jute as a base.

At the time of strong influence of consumerism and mass media, the spectacle represents the mediation of commercial images that most typically lack content. The shiny façade of consumerism and spectacle culture, made up of images, simulations and simulacra, skillfully conceals the void, distracting our attention from actual social needs. The needs become suppressed by the abundance of imposed desires. The goal becomes attaining satisfaction, which is almost never completely realised. The spectacle becomes a substitute for emptied reality, impoverished interpersonal relationships, as well as for neglecting the nature of one’s own being and primordial needs. The rule of the shows has led to the complete aestheticisation of reality, in which the mass media play the key role.

The appeal of the spectacle stems from its visual strength; fascination, strong effects, intoxication, just for a moment making reality more beautiful and pleasant, while actually blinding our senses and feelings.

Paul Richard Landauer ‘uses’ painting as a thought process through which he removes all unnecessary information, images and imposed desires. In this discovery of the primordial self, he performs a visual and spiritual detoxification of the mind leading him to shaping his own microworld. This world is depicted by Landauer’s paintings, as authentic psychological portraits. The painting process becomes essential in the realisation of the unknown, the discovery of the spirituality of one’s own being and the long-lost paradise.

He travels into his own past, exploring endless distances and unknown territories, and it is there that he crucifies his flags, fictional, personalised, confessional and intimate. Paul perceives the canvas as an arena where he is supposed to act, because what appears on the canvas is not an image, but an event, a hyperrealistic portrait of the subconscious. For a moment, Landauer leaves the brushes, painting on the canvas directly with the primary tool – his hand. In order to perpetuate and re-examine his existence, he leaves oil fingerprints on a series of plane trees, thus shaping his own existence. Leaving countless prints, none of which resembles the other, the author shows his own (spiritual) metamorphosis, i.e. transformation through each fingerprint, thus also changing the observer, by the very decision to observe them.

At the time of virtual worlds and media ambience where almost all fields are enslaved, painting remains a haven of freedom and anticipation. Therefore, Landauer creates his own piece of paradise, presenting us with its relics, stars, gardens and flags. He creates routes of freedom on the canvas, releasing inner energy.