Boris Johnson has made more than £1...
Read more

A green coronavirus-induced recovery could help close the emissions gap, but it is not enough for world leaders to meet their goal of limiting warming to well below 2C.

World leaders could use the coronavirus pandemic to shave 25% off their greenhouse gas emissions with green recovery packages, according to a report released today by the UN Environment Program (UNEP).

But they have so far continued to make choices that push them further away from targets they agreed upon five years ago to protect the climate and their citizens. By burning fossil fuels and chopping down rainforests, countries are on track to heat the world by 3.2 degrees Celsius this century, despite committing to keep it well under 2C.

The annual emissions gap report, now in its 11th year, assesses the gap between what countries committed to doing under the Paris Agreement and what they need to do to keep temperatures in check. Despite recent pledges from major polluters to cut their emissions, the report describes concrete commitments as “woefully inadequate.”

“The wealthy bear the greatest responsibility,” wrote Inger Andersen, executive director of the United Nations Environment Program. The richest 1% of people, who emit more than double that of the poorest half of the global population, “will need to reduce their footprint by a factor of 30 to stay in line with the Paris Agreement targets.”

With factories closed, flights grounded and people buying fewer things, the pandemic is expected to lower carbon dioxide emissions by up to 7% this year, the report found. But the coronavirus pandemic will do little to help governments meet temperature targets unless world leaders prioritize a green recovery.

By investing in green jobs and infrastructure and choosing climate-friendly policies, world leaders could lower emissions by a quarter of what they would otherwise be by 2030, according to the report. Among the suggested solutions are ending fossil fuel subsidies, banning new coal plants and planting trees in deforested landscapes.

But the report says most rich countries are instead supporting a “high-carbon status quo” with some putting money into new fossil fuel projects.

“There’s been a perception that, because we’ve been stuck at home and not able to travel, we were doing great and moving in the right direction,” said Martina Caretta, assistant professor of geography at West Virginia University in the US and IPCC author, who was not involved in the report. “But the truth that comes out is that this is just like a blip.”

The report also calls for more action on planes and ships, which together account for 5% of global emissions and growing. About two-thirds of these emissions are international and not directly covered by national climate action plans under the Paris Agreement. 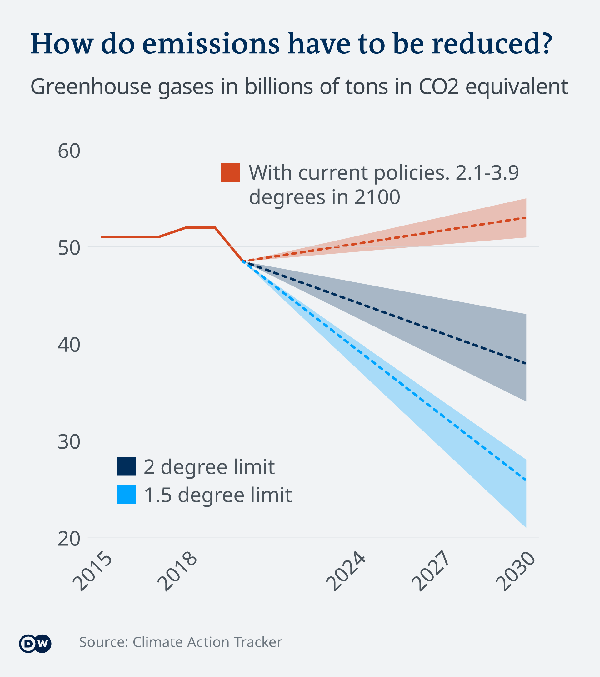 Several countries have upped their ambitions in recent months.

China, the world’s biggest polluter, said in October it will be carbon neutral by 2060. South Africa and South Korea have now committed to doing so by 2050, and US president-elect Joe Biden — who has promised to bring the US back into the Paris Agreement — has agreed to the same goal.

Japan has joined the EU in aiming for net-zero greenhouse gas emissions by the middle of the century, which would mean also cutting down other pollutants like methane. Last week, the UK set itself the most ambitious short-term goal of any major economy, pledging to slash emissions by 68%— compared to 1990 levels — within this decade.

But none of these commitments have yet been translated into climate action plans known under the Paris Agreement as nationally determined contributions.

Burning fossil fuels has already warmed the Earth by more than 1C and this has made storms stronger, heat waves hotter and droughts longer. By emitting more CO2 with each passing year, world leaders are locking in deeper cuts to emissions in the future.

The level of greenhouse gases in the atmosphere in 2019 reached the equivalent of 59.1 gigatons of CO2. While the pandemic has tightened the carbon tap, slowing the flow of pollutants temporarily, it did not stop it.

“Are we on track to bridging the gap?” the authors write. “Absolutely not.”

Acting sooner rather than later will decrease the amount of CO2 that would need to be removed from the atmosphere. The negative emissions technologies needed to keep warming below 2C — without rapidly cutting emissions now — do not yet exist at scale.

The Paris Agreement temperature targets are a long way away but “actions in the form of emission reductions to achieve them need to start immediately,” said Alaa Al Khourdajie, research fellow at the Centre for Environmental Policy at Imperial College London and IPCC senior scientist, who was not involved in the report.

It highlights that two-thirds of greenhouse gas emissions come from private households. This includes activities like eating beef, driving cars and heating homes. For instance, cutting meat out of a diet lowers emissions by about half a ton of CO2 a year — and going vegan reduces it by almost double that.

The report proposes policies for enabling lifestyle change that include laws restricting adverts for high-carbon foods, giving subsidies to people retrofitting homes with heat pumps and placing a levy on frequent flying.

Stopping climate change through personal choices or government policies is often “presented as a trade-off between two choices,” the authors write. “However, system change and behavior change are two sides of the same coin.”

United Nations: 16 Days Of Activism Against Gender Based Violence

United Nations Office in Serbia held an evening of engaging poetry within the 16 Days of Activism Against Gender-Based Violence initiative. Art has the power...
Read more

In this year's global report of the United Nations on the development of eGovernment, Serbia is included in the group of countries with the...
Read more

Hungarian diplomat Csaba Korosi was sworn in as the President of the 77th UN General Assembly, which will open in New York on Tuesday. Kőrösi...
Read more

The United Nations has warned that the war in Ukraine has helped to stoke a global food crisis that could last years if it goes unchecked,...
Read more

UN chief Antonio Guterres has called for more investment in renewable energy and an end to the millions of dollars in subsidies for fossil...
Read more