The value of the dollar recorded a...
Read more

The Swiss voted by a narrow majority...
Read more

According to the results published after the...
Read more

The war in Ukraine has disrupted supplies of grain and fertilizer, producing the worst food shortages since the global...
Read more
1 March 2020
Facebook
Twitter
Email

The European economy slowed down more than was forecast in the last quarter of 2019, and it is still facing geopolitical risks while it braces for the full impact of Brexit in a few months. Now the coronavirus outbreak has become an economic risk: after Italy imposed a strict quarantine on at least 10 northern towns, it is no longer a distant danger in either space or time

This comes at a moment that could put not only the EU’s economy, but its politics and institutions, under serious stress. Italy is Europe’s third-largest economy, and its slowest-growing — GDP is forecast to increase a paltry 0.3% this year, vs 1.2% for the whole eurozone. The coronavirus had been detected in one of the country’s most prosperous regions of the industrial north, which could hit manufacturing and exports — one of the few strengths of the Italian economy.

There are already many reasons to doubt Europe’s capacity to deal with the problem swiftly and decisively — even before envisioning an even more serious spread of the virus. The bloc is likely to approach a possible severe crisis in the same way it did the euro crises of the recent past: by bickering and delaying, thus increasing the final cost of the decisions it finally takes.

To fight a downturn, Europe can in theory consider fiscal stimulus or monetary easing, and preferably both. But policy makers already seem more eager to offload the hot potato than to think about serious ways to deal with a possible crisis. In the margins of the G20 meeting of finance ministers last weekend, both the French and Italian central bank governors warned that responsibility to deal with the fallout from the virus should fall on governments since the European Central Bank’s policy is already loose enough.

No matter that this runs contrary to the ECB’s official party line, which is that it has, or could always find, new tools or instruments to deal with a worsening economy. The governors’ statement is a good advance indication of the game of pass-the-parcel that Europe’s policy makers will play when the time comes for serious decisions.

On the central bankers’ side, the “strategic review” that ECB President Christine Lagarde seems so keen on promoting could prove a serious distraction if a crisis hits. Until now it seemed that the next ECB governing council meeting in March would merely be an uneventful one, with policy unchanged. But with new risks tacked on a slowing economy, that may no longer be the case. 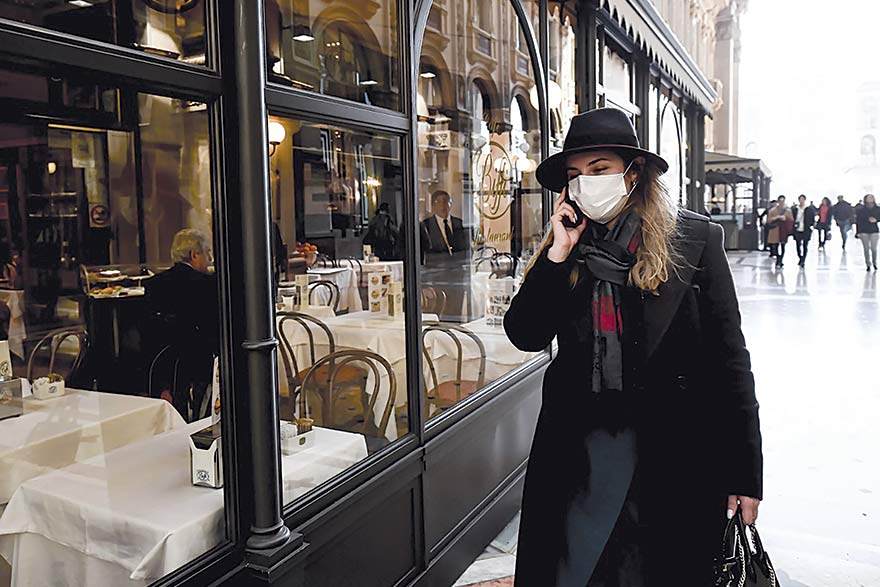 Meanwhile, European governments have just shown how divided they are on fiscal matters in their discussions of the next EU multi-year budget, with an offensive of the self-described “frugal” countries, led by the Netherlands, who insist on shrinking common spending, in spite of the hole that the lack of U.K. contribution will leave in the budget. There is no doubt where they would stand if the question of a pan-European coordinated fiscal stimulus is raised.

Germany has refrained from formally appearing alongside the “frugals” even though there is no doubt where the heart of German politicians is. But the ruling coalition government is too focused on domestic politics to care much about what to do in Europe. Chancellor Angela Merkel’s conservative party was just trounced in regional elections in Hamburg and is still in search of a leader. Uncertainty is for now the only certainty in German politics, with the likelihood of Merkel’s early retirement (instead of at the end of the Parliament’s term in the fall of 2021) increasing by the day. Should a major crisis erupt now, the German political funk will prove a serious obstacle to European decision-making.

Health policy is mostly a national matter, and is not included in the EU’s remit. And for now, as UBS chief economist Paul Donovan has noted, “fear is what matters economically” when talking about the outbreak’s impact. But what the EU’s responsibility should be is to make sure it would and could help a member country hit disproportionately by the outbreak to cushion its economic consequences. There are reasons to doubt it will be up to the task.

In Europe the fears have intensified over the spread of the coronavirus, roiling markets from oil to equities. Investors have fled to perceived safety, sending gold and bonds higher.

In Austria, a young Italian couple who live in Innsbruck in the Tyrol were confirmed to have the virus. Switzerland said a man in his seventies living in Ticino, had been infected in the city of Milan on 15 February and was now in isolation.

A man in Croatia who recently returned from Italy became the first confirmed patient in the Balkans.

On the Spanish island of Tenerife, up to 1,000 guests were locked down in a hotel after an Italian doctor and his wife tested positive for the virus.

Spain reported its first case on the mainland, involving a woman in Barcelona who had been to northern Italy.

France and Germany reported new cases involving people who had recently been to northern Italy.

France also confirmed the first death of a French national from the virus. The 60-yearold French man was the second fatality in the country, after an 80-year-old Chinese tourist died there earlier this month.

WHO: Three Possible Scenarios For The Pandemic

The World Health Organization (WHO) has released an updated plan for Covid-19, describing three possible scenarios for how the pandemic may develop by the...
Read more

Protests against fresh Covid-19 restrictions have rocked Europe over the weekend, with demonstrations breaking out in places such as Brussels, Vienna, Rome and Amsterdam. There...
Read more

COVID-19 hospitalizations are rising among people who are fully vaccinated, according to Dr. Anthony Fauci, the director of the National Institute for Allergy and Infectious Disease.  Fauci discussed what was...
Read more

Serbia To Be Connected To The EU Digital COVID Certificate System