The Covid-19 pandemic has shaken up the...
Read more

The United States and several other nations...
Read more

The small rotorcraft made history, hovering above...
Read more

Today, we face the global outbreak of a disease that has the potential to catalyze what the historian Eva Schlotheuber terms a “pandemic of the mind.” As misinformation proliferates and lines between fact and fiction are routinely and nonchalantly crossed, world leaders must, now more than ever, illuminate a thoughtful path forward, one reliant on science and evidence-based reasoning. Indeed, many have

One leader goes further still. Trusted by her people to navigate this outbreak’s murky waters, without inciting or succumbing to a pandemic of the mind, one politician is less a commander in chief and more a scientist in chief: Angela Merkel.

For weeks now, Germany’s leader has deployed her characteristic rationality, coupled with an uncharacteristic sentimentality, to guide the country through what has thus far been a relatively successful battle against COVID-19. The pandemic is proving to be the crowning challenge for a politician whose leadership style has consistently been described as analytical, unemotional, and cautious. In her quest for social and economic stability during this outbreak, Merkel enjoys several advantages: a well-respected, coordinated system of scientific and medical expertise distributed across Germany; the hard-earned trust of the public; and the undeniable fact that steady and sensible leadership is suddenly back in style. With 30 years of political experience, and facing an enormous challenge that begs calm, reasoned thinking, Merkel is at peak performance modelling the humble credibility of a scientist at work.

Merkel was raised in a small East German town to the north of Berlin. Her father was a Lutheran pastor and a target of surveillance by East Germany’s security service, the Stasi. A brilliant student, Merkel learned early on “not to put herself in the centre of things” lest she exposes herself or her family to undue scrutiny, according to Stefan Kornelius, her official biographer and the foreign editor of the Süddeutsche Zeitung newspaper. When the Berlin Wall fell in 1989, Merkel, who had by then earned a doctorate in quantum chemistry, was working as a research scientist. Soon after, she left her job to join a new political group that had formed in her neighbourhood, thus quietly launching her political career. She rose in German politics and, through sheer smarts and a series of well-timed tactical manoeuvres, ascended in 2005 to the chancellery, the head of Germany’s federal government. Her trajectory was dramatic and uncommon—for a woman, for an East German, and a trained scientist with no background in law or civil service.

A brilliant student, Merkel learned early on “not to put herself in the centre of things” lest she expose herself or her family to undue scrutiny, according to Stefan Kornelius, her official biographer

Why did Merkel leave what appeared to be a promising career for the uncertainty of politics? In a New Yorker profile of her, George Packer called the decision “the central mystery of an opaque life.” Kornelius attributes the drastic change to a realization that, as a scientist from poorer and under-resourced East Germany, she would be “outpaced” by her western peers.

Merkel has never spoken publicly about why she left science, but perhaps that is because it never really left her. Scientific thinking—her deliberate probing of each new bit of information, her cautious consultation with experts—remains integral to Merkel’s daily decision-making process and her political persona. She is undoubtedly aware that her measured, modest handling of Germany’s affairs is at least partially why she has, for almost 15 years now, enjoyed the support of a country whose historical reverence for scientific achievement and great minds (think Kant, Einstein, innumerable others) is forever balanced by an acute wariness of charismatic leaders with big ideas (think Hitler).

Prior to the pandemic, Merkel’s political star had been waning. She had become known, according to Kornelius, as the chancellor “who avoided things, much less as the one who built things.” Yes, she had prevented Europe from falling apart during the financial crisis and led the continent as it grappled with the subsequent migration crisis. But of late, she had been left politically sidelined by the domestic rise of populism, the far right, the far left, and by autocratic leaders around the world. 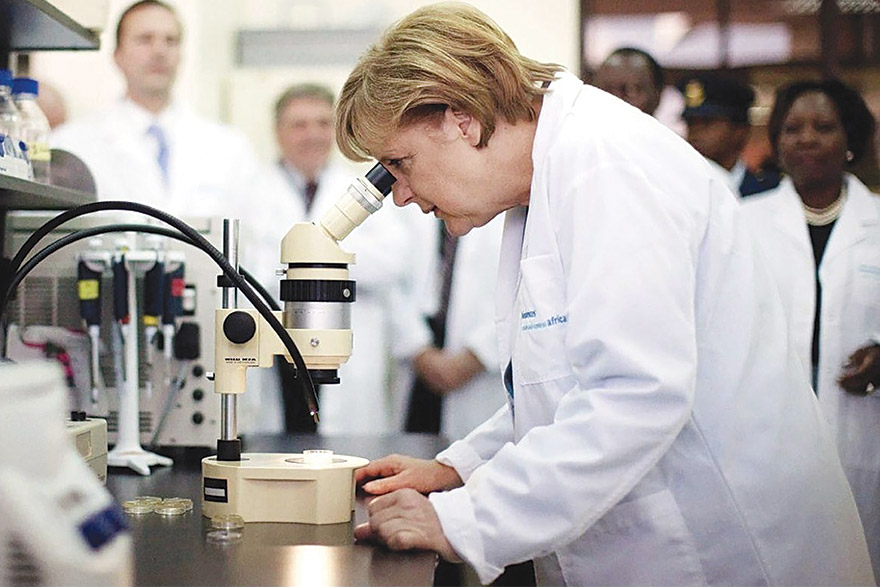 Then came the coronavirus. Germany’s first case was confirmed on 28th January, but the threat didn’t truly transform everyday life here until the middle of March. Governmentmandated restrictions in Berlin were incremental, but more and more disruptive. Few were bothered by the cancellation of large gatherings such as industry conferences, but when the city’s creative centres—its theatres, operas, and concert halls—closed on 10 March, something essential went missing. A few days later, Berlin’s notorious and celebrated nightlife scene went dark too. Pedestrians dispersed, spooked restaurant owners closed up shop or erected plexiglass barriers. The very fabric of the capital’s social and cultural life was fraying. Residents of this once-divided city were again reminded just how quickly freedom could be lost.

Merkel—for whom, as a former East German, liberty and freedom are known to be paramount—understood all too personally what the lockdown meant for her fellow citizens. On 18th March, after the country had closed its schools, its economy, it’s a way of life, she gave a rare televised speech that solidified her leadership.

Facing the camera from behind a desk, with both the German and European Union flags to her side, she began on an emotional note, by conceding that “our idea of normality, of public life, social togetherness—all of this is being put to the test as never before.” She emphasised the importance of democracy and of making transparent political decisions, and she insisted that any information she shared about the pandemic was based on thorough research. Then, in an astonishing statement for a German leader, one she “must have considered endlessly,” Kornelius told me, she made reference to her country’s darkest hour. “Since the Second World War,” Merkel said, “there has not been a challenge for our country in which action in a spirit of solidarity on our part was so important.”

Scientific thinking—her deliberate probing of each new bit of information, her cautious consultation with experts—remains integral to Merkel’s daily decisionmaking process and her political persona

What stood out from the address was not so much Merkel’s medical advice, but her unusually direct appeal to the notion of social togetherness and to her own limitations as an individual and as a leader (“I firmly believe that we will pass this test if all citizens genuinely see this as their task”). Her rational assurances and her emotional appeal were crucial at a time of rising panic. While the mood isn’t quite so dark here anymore—thanks to a variety of factors, Germany appears to have dealt with the outbreak better than many other countries—Germans largely continue to heed the chancellor’s detailed directives. The number of people infected by the coronavirus has increased, as it has throughout the world. But unlike in Italy, where more than 22,000 have lost their life to COVID-19, or in the United States, where the death toll has surpassed that figure and continues to rise rapidly, total deaths in Germany have been inching up from 4,000. To put this in perspective, more than twice as many New Yorkers have lost their life to the coronavirus as have individuals in all of Germany to date.

While country-level comparative data may be somewhat unreliable, and the numbers can certainly take a turn for the worse in Germany as anywhere else, experts cite a number of possible factors for the country’s relatively low number of deaths: The average age of coronavirus patients has been lower here than elsewhere, which limits the risk; the number of people tested for the virus is higher than in other countries, and cases are for the most part carefully tracked; and the public health-care system has been efficient enough to ramp up the number of available intensive-care units to meet potential demand. 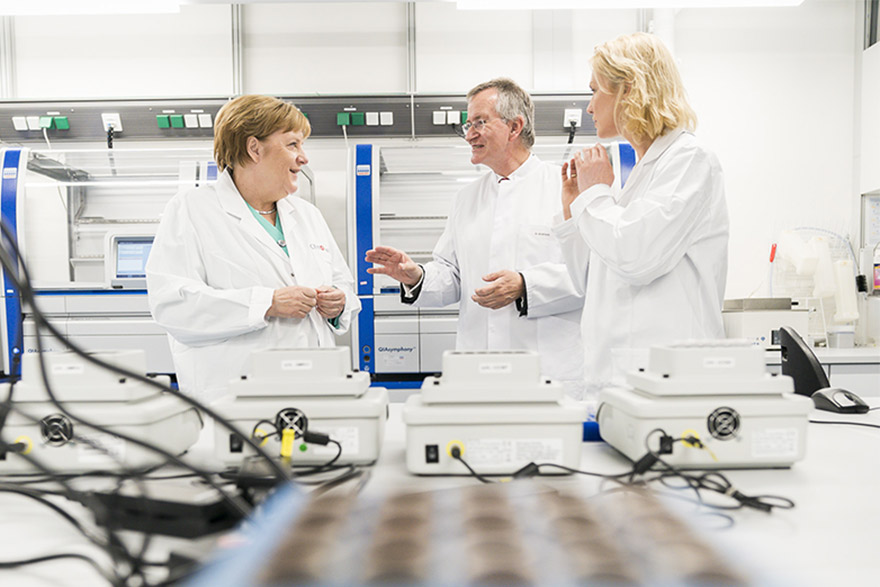 Given her longevity, any resulting successes are at least in some degree attributable to Merkel’s leadership. The chancellor has a way of bringing “divergent interests together in compromise,” Kornelius said. Her ability to admit what she doesn’t know, and delegate decisions, has been a particularly good fit for post-war Germany’s federalized political structure.

Merkel has relied on experts from wellfunded scientific-research organizations, including public-health agencies such as the Robert Koch Institute and the country’s network of public universities. The Berlin Institute of Health, a biomedical-research institution, has, like other organizations, recently pivoted its efforts in order to study the coronavirus. Its chairman, Axel Radlach Pries, told me that Germany’s research institutions are currently working closely together to “establish nationwide systems” of research. The federal government, with Merkel at the helm, plays a convening role, recently gathering all of the country’s university medical departments into a single coronavirus task force.

The virus is still far from defeated, and no one knows what challenges lie ahead for Germany, or the rest of the world. But judging by Merkel’s approach—her rigour in collating information, her honesty in stating what is not yet known, and her composure—she may someday be remembered not as Germany’s greatest scientist, but as its scientist in chief: the political leader who executed, celebrated, and personified evidence-based thinking when it mattered most.

How Do The Germans Do It?

The United States and several other nations have pledged to cut carbon emissions faster, putting pressure on other big polluters to clean up their...
Read more

European Union leaders moved closer on Thursday to an agreement on certificates showing that citizens have been vaccinated against COVID-19, a move that could...
Read more
Cord MagazineLeaders Meeting Point