How An American & A Serb Changed World Basketball

Novak Djokovic Will Not Play At US Open

Ivana Vuleta Is The Champion Of Europe

Belgrade will this mid-August host the international ’Basketball Without Borders’ (BWB) camp, which is traditionally organised by the World Basketball Federation (FIBA) and the American National Basketball Association (BNA), which is just one of the fruits of the joint “masterpiece” of the long-serving FIBA secretary general and NBA commissioner

We can only wonder what world basketball would look like today if Borislav Stanković and David Stern hadn’t reconciled the two basketball worlds – of professionals and amateurs – three decades ago, thus creating the conditions for “basketball without borders”. One thing is certain: without their historic mission, basketball wouldn’t be as beautiful and glamorous as it is today, and it certainly wouldn’t be one of the showpiece events at the Olympic Games.

Belgrade will this mid-August host the Basketball Without Borders (BWB) camp, which is just one of the accomplishments of the joint work of Stanković and Stern. This camp is held on all continents and, alongside the game itself, it also promotes fair play, tolerance and cooperation in sport.

-This idea was launched by FIBA, the NBA and the United Nations in 2001. At that time, NBA players from the countries of the former Yugoslavia gathered in Treviso, among them Vlade Divac, Toni Kukoč, Predrag Stojaković, Dragan Tarlać, Radoslav Nesterović et al. The upcoming camp will provide fresh confirmation that Belgrade is one of the cities that are important to world basketball, a city where basketball lives, and a country that treats basketball as a national sport.

FIBA and the NBA also wanted to visit Belgrade because, among other things, many NBA players have passed through here. It will be an opportunity to bring together former basketball stars from the region. A total of 66 players hailing from the territory of the former Yugoslavia have reached the NBA, which is an incredible figure – says FIBA sporting director Zoran Radović.

And everything began in the mid-1980s when then FIBA Secretary General Bora Stanković and NBA commissioner David Stern met.

Stanković, who became the head of FIBA at the time of the 1976 Montreal Olympics, saw a reliable partner in Stern, who took over the helm of the NBA in 1984.

-Immediately after Stern’s arrival as the head of the NBA, an important press conference was held in Milan. These were the first tournaments organised by our Italian friends with NBA teams. Italy hosted the Phoenix and New Jersey teams, who played against the best Italian clubs, after which a press conference was organised. Also present, alongside Stern and myself, was Enrico Vinci, then president of the Basketball Association of Italy. I then gave a resounding statement in which I said that I was very proud to be sitting at the same table with the “devil” – because professional basketball players and their officials were considered somehow evil by the international Olympic family and among the people from the Olympic committees – and that my desire was to work with Mr Stern to find the best way to further develop basketball around the world. Stern liked that statement a lot, so there was mutual support from the beginning – says Stanković.

66 NBA Players From The Territory Of The Former Yugoslavia

Following the meeting in Milan, Stanković and Stern continued to work on bringing the two worlds together and creating the conditions for professionals (NBA players) to appear at the Olympics. Stern recalls one of their first meetings in New York:

– Bora Stanković and I met in my office with Russ Granik, who was then my deputy. He suggested that we consider the possibility of including NBA players in the Olympics. He said that it was unnatural for FIBA to have the entire basketball world under its jurisdiction except for 350 exceptional players who were performing in the NBA. He also said that it would be a great thing for us to use our influence to contribute to the creation of such a climate in America. This proposal seemed to be something entirely logical for us. Bora warned us that there would be strong opposition, primarily in the form of the basketball associations of the United States and the Soviet Union… We said that we would work on that and that, regardless of the outcome, we were glad to have at least had the opportunity to discuss the topic.

At the 1992 Barcelona Olympics, the NBA arrived with the biggest stars of the NBA league… it was then, and remained, the “Dream Team”, the best collection of players ever to appear in competition. They reached the gold medal by winning with an average points difference of 43.8, while Stanković and Stern were subjected to harsh criticism from their opposition. They told them that the idea of unification was ridiculous and made no sense. 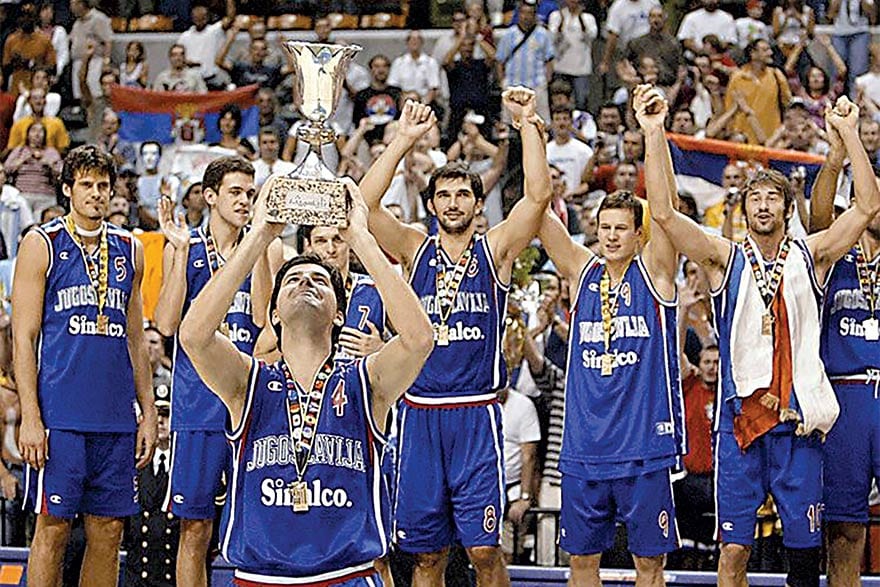 – In the American qualifications for Barcelona, Cuban basketball players brought cameras to take their pictures Jordan, Bird, Magic and other American stars, which illustrates the vast gap in quality. However, Argentina had already won the Olympics in 2004, despite the U.S. being represented by professionals, says Stanković.

Stern also recalls very well how much resistance there was in those years:

– When we announced our unification deal, the media in America were very hostile. They said: why are we doing this when the rest of the world will never be as good as America? However, we ultimately saw confirmation of Bora’s wise stance that you can only advance if you play against those who are better than you, and thus the gap gradually narrowed. And so it was that at the 2016 Rio Olympics we had a total of 54 current and former NBA players in the tournament – so, 54 players in 12 national teams. That best illustrates how much the basketball world has changed since then, and what a great visionary my friend Bora was.

Serbs And Americans In The Film “Global Game”

Belgrade-based production company Cinnesport is filming a feature-length documentary film entitled “Global Game” and dedicated to the joint mission of Bora Stanković and David Stern. The backbone of the film is the exclusive dialogue between Stanković and Stren, filmed in Geneva during the summer of 2016, when Stern was enrolled in the FIBA Hall of Fame. The film will be completed by the 2020 Tokyo Olympics and features some aces of Serbian and American basketball, but also some other famous names from elsewhere in the world

Basketball Collaboration With The U.S.

1923. American envoy of the Red Cross, William Wieland, brings the first basketball to Serbia and Yugoslavia, in early autumn

1923. He holds the first courses on the court of the Kralj Petar I School in Belgrade.

1952. Red Star basketball players become the first team from Serbia and Yugoslavia to have “contact” with the Harlem Globetrotters, at a tournament in Milan. This event shifts the view of the game among some of the pioneers of Serbian basketball.

1960. The Yugoslav national team encounters the U.S. team for the first time in a major competition. The American team wins the match at the Rome Olympics with a score of 104:42, marking the worst ever defeat in the history of the Yugoslav national team. That U.S. team goes down as one of the best in basketball history, featuring the likes of Oscar Robertson, Jerry West, Jerry Lucas et al.

1963. Yugoslavia beats America for the first time, 75:73 at the World Championships in Rio de Janeiro.

1970. Yugoslavia becomes world champion for the first time after victory over the U.S. in Lubljana. It is during the 1970s that Yugoslav clubs and the national team begin competing in tournaments in the U.S. and acquiring new knowledge through matches with college teams.

1976. Butch Reynolds signs for Partizan and becomes the first foreigner to play in Serbian basketball (the second in Yugoslavia). Dražen Dalipagić is invited by coach Red Auerbach to attend a camp of the Boston Celtics and heads to America.

1987. At the U-19s World Cup in Bormio, Yugoslavia beats America and wins gold. This leads to the forming of the “white dream team”: Divac, Kukoč, Rađa, Đorđević et al.

1989. Vlade Divac arrives at the Los Angeles Lakers, while Žarko Paspalj joins the San Antonio Spurs. The decision is made by FIBA in Munich confirming that NBA players can compete in the Olympics.