At the end of June, Serbia government...
Read more

85 years ago, on 9th August 1937, the oldest living American alligator in the world arrived at the Belgrade...
Read more
9 December 2020
Facebook
Twitter
Email

Prospects, factors and opportunities in Serbia’s most competitive agro sector

Ripe, ruby apples, crimson clusters of cherries, golden pears – Berries, stone fruits all grown in orchards in Serbia’s plains make their way to groceries, dinner tables, fruit bowls and countertops from Kazakhstan and Russia through Turkey to the EU every year. The fruit sector is currently the most competitive industry in Serbia. The key is good planting materials, a good environment for orchards, favourable international trade and a good economic environment which ensures competitiveness.

The production of pome (apple, pears) and stone fruits (plums; cherries; peaches) and planting material in Serbia has been increasing in volume over the past several years. The global pandemic increased the demand for fresh produce. Serbian fruit producers recorded a rise in export of pome and stone fruits by 19.8% in the first half of 2020.

In 2019, the total fruit production output was about 1.5 million tons and the production of pome and stone fruit planting material is about 10 million plants per year.

An apple a day keeps the doctor away

Apple production has reached 500,000 tons per year and no further production growth is expected. Over the last 10 years, apple has been the most attractive fruit in terms of investors’ interest and they improved apple production and sales. The entry of new players into the market chain has led to structural changes among producers, as well as to intensification of production and improved quality of the final product.

The plum sector is stagnating – grown on 38% (72,224 ha) of the total orchard area. Nevertheless, the majority of the production goes to brandy and to the frozen market. Sour cherry competitiveness is based on specific characteristics of the variety suitable for industrial processing and good export trends of fresh sour cherries. In recent years, sweet cherry production has been modernized, so the production was organized in intensive plantations with attractive varieties.

The production of pome and stone fruit planting material is about 10 million plants per year. This number concerns the production which goes through the official certification scheme. Serbia got delisted from the restriction of exporting apple planting material to the EU market (Article 42 Reg EU 2016.2031).

Plants are produced only in registered nurseries, supervised by official inspections. The apple planting material is certified as virus free due to status of viruses and their epidemiology. The plum and sour cherry planting material is still at large percent standard category. The export of pome and stone fruit planting material from Serbia is increasing and in 2019 it reached $27,7 million. Main export destinations are the Russian Federation and the Netherlands. 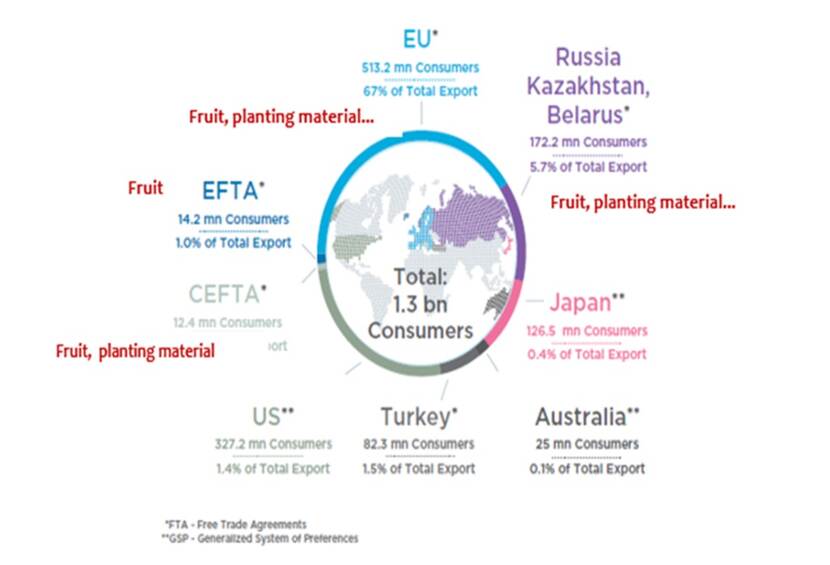 The major drivers for the increase of the production of fruit and planting material in Serbia are preferential export status at the Russian Federation, as well as other markets with which Serbia has free trade agreements, like the EU, CEFTA, Turkey, EAEU etc. Several Dutch companies operating in Serbia, have already utilized this potential.

An advantage of production in Serbia are the opportunities to market the fruits in Russia and other CIS countries, particularly Kazakhstan. Serbia has a favourable trade position due to preferential trade agreements as well as the fact that fruit is marketed in the Russian Federation where the EU competition is not existing. This situation also presents one of the biggest risks for Serbian fruit sector because once the ban on the EU food products is lifted the competition will increase.

The planting material produced in Serbia is competitive at CIS market although EU produced planting material is present at the market. The perspective of CIS countries for marketing planting material are high because they are in the process of agriculture structural reforms – to produce locally more higher value crops including fruit. The COVID situation as well as political instability in the CIS region in 2020, are limiting to a certain extent potential opportunities.

Important strengths in Serbia are the well-developed land and credit markets – two preconditions for competitive agriculture. The Vojvodina region, due to its production structure, enables the access to the large parcels and surrounding areas without Rosacea family plants permitting isolation belt establishment for the mother plantations as well as for the nurseries.

The land price in Vojvodina varies, and in most cases the price is 10.000 – 15.000 EUR/ha but is also reaches 30.000 EUR/ha depending on quality, land parcel size, infrastructure, position, etc. The land lease market is very well developed providing the opportunity for nursery field rotation.

From a small family business established in 1998 to a regional leader in the production of fruit juices in 2018, NECTAR has undergone a...
Read more

At the end of June, Serbia government debt amounted to 31.3 billion euros, which is 53.2 percent of gross domestic product (GDP), the Ministry...
Read more