About 300km of highways have been constructed and more than 500km of railway lines have been restored over the course of the last four years, with construction becoming the driver of economic growth. A new investment cycle worth around €10 billion was launched this year, with projects in road, rail, water transport and aviation, which will enable the further connecting of Serbia with the region, the EU and the rest of the world, but also the arrival new investments and a better life for citizens

Significant results have been achieved during the last four years in all areas under the jurisdiction of the Serbian Ministry of Construction, Transport and Infrastructure and Deputy Prime Minister and Minister Zorana Mihajlović. From the construction of more than 300km of highways, the completion of construction and opening of the complete road route of Pan-European Corridor 10 from north to south. From the commissioning of 103km of the Miloš the Great Highway to the completion of Novi Sad’s Žezelj Bridge. From the reconstruction of more than 500km of railway tracks to the launch of construction of the first high-speed railway in the region, from Belgrade to Budapest. From the granting of a concession for Belgrade Nikola Tesla Airport, via the development of Niš Constantine the Great Airport to the opening of Morava Airport near Kraljevo. From the investments in water transport, municipal infrastructure and water plants, to the realising of progress on gender equality and the social inclusion of Roma people.

In the previous period, among other things, a new toll station has been installed in Vrčin, the first phase of construction of the Belgrade-Central railway station in Prokop has been completed, the Batrovci border crossing has been expanded, the new Ljubovija-Bratunac Bridge has been built and the first high-speed chargers for electric cars have been installed along Corridor 10.

Serbian rail lines are now being traversed by 48 new trains, while 16 new freight locomotives have been procured and investments are being made in the reconstruction of regional rail lines after a break of several decades, which will lead to around 800 kilometres of rail tracks being renewed in the 2018-2020 period.

Projects in water transport have a total value of around €340 million and include, amongst others, reconstruction of the Đerdap Hydro Power Plant, revitalisation of the navigable waterways of the rivers Sava and Danube, construction and expansion of ports in Novi Sad, Smederevo, Belgrade, Sremska Mitrovica and Bogojevo, as well as the introduction of a state-of-the-art system for the safe management of navigation.

In air transport, a concession contract was concluded with French company Vinci worth €1.46 billion euros, including investments worth €732 million, while state investments have resulted in increasing the number of passengers at Niš’s airport from 1,335 passengers in 2014 to 351,581 passengers in 2018, with a tendency for further growth.

The construction sector has been fully regulated in legislative terms over the course of the past two years, with Serbia now ranked among the top 10 or 11 countries in the world for the issuance of building permits and – thanks to major investments in infrastructure – this branch has once again become a driver of economic growth in Serbia.

On the basis of results achieved and reforms implemented, a new investment cycle worth more than €10 billion has also been launched with projects in road, rail, air and water transport. These projects will ensure Serbia’s good connectivity with the region, the European Union and the rest of the world, but also new investments and a better quality of life for Serbian citizens.

The construction of seven new highways is also planned within the scope of this new investment cycle, which we present here.

A commercial contract for the elaboration of detailed regulatory plans, project design and construction of these sections of the Belgrade-Sarajevo Highway was signed in Belgrade on 19th December 2018 between the Government of the Republic of Serbia, Public Company ‘Roads of Serbia’ and Turkish company TASYAPI.

This commercial contract is valued at €250 million and encompasses the preparation of planning, design and technical documentation and the execution of works on the Sremska Rača-Kuzmin section (totalling €225 million) and the preparation of design and technical documentation for the Požega-Kotroman section (€25 million). The project will be financed jointly through a loan from a Turkish bank and the budget of the Republic of Serbia.

The second section – Požega-Užice- Kotroman (border with Bosnia-Herzegovina) – will cover a distance of about 60 kilometres and will connect with Miloš the Great Highway at Požega, and from there it will be connected with Corridor 10 via the Moravian Corridor (Preljina-Pojate).

The Moravian Corridor, covering a length of 112 km, will connect Corridor 10 and Miloš The Great Highway, passing through all major towns and cities in this part of Serbia, which is home to around 500,000 people (Čačak, Kraljevo, Vrnjačka Banja, Trstenik, Kruševac, Stalać and Ćićevac). Alongside the construction of the highway, this project will also encompass the regulating of the West Morava river and its tributaries, as well as the construction of telecommunications infrastructure.

On the basis of a conducted public invitation, in late August the Government of Serbia adopted the Decision to select a strategic partner with the aim of implementing the project to construct the infrastructure corridor for Highway E-761’s Pojate-Preljina section (Moravian Corridor), through which the Bechtel-ENKA consortium was selected as the strategic partner.

The section from Preljina to Požega (30.96 km) intersects the sections of Miloš the Great Highway from Obrenovac to Preljina, which are already open to traffic. This highway is important not only for the faster development of this part of Serbia – primarily the Moravica District but also for regional connectivity. Highways leading to Bosnia- Herzegovina (Belgrade-Sarajevo Highway) and Montenegro (Corridor 11) will intersect at Požega, while Corridors 10 and 11, towards Bulgaria and Greece, will intersect at Čačak.

A commercial contract for the Preljina-Požega section of the highway was signed with China Communications Construction Company (CCCC) in November 2017. This contract (project) is valued at €450 million). The launch of works was officially commemorated on 17th May 2019, with the President of Serbia and the Deputy Prime Minister in attendance, while works initially began on the Laz and Munjino brdo tunnels. This section is specific in that it passes through very difficult geographical terrain, which ensures numerous tunnels and bridges will have to be built (almost a third of the route comprises bridges and tunnels, with a total of three tunnels and 35 bridges). 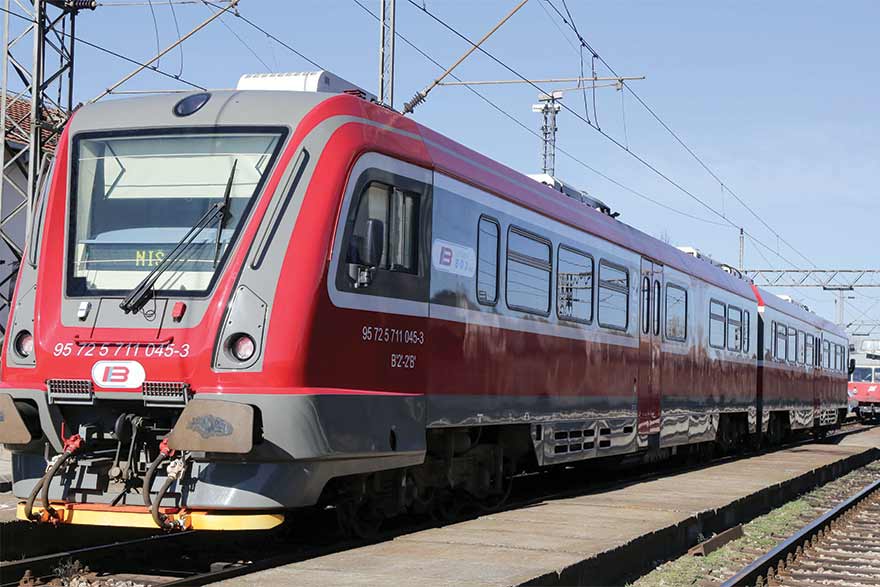 Negotiations on the concluding of a commercial contract for the continuation of the design and execution of works on the Ruma-Šabac-Loznica roadway are being led with Azerbaijani company Azvirt by the Working Group named by the Government according to the Decision for the implementation of this project. Negotiations to reach agreement on a loan are underway with the Republic of Azerbaijan. 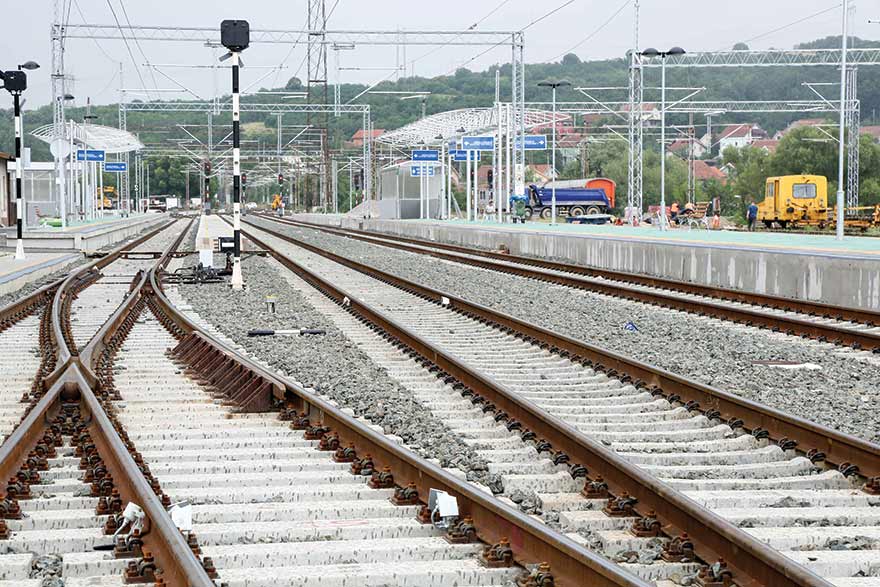 The Niš-Merdare-Priština highway forms part of the EU’s core indicative trans network. Corridor 10 and this highway will connect at Niš and enable departures from Serbia to Albania’s ports on the Adriatic Sea, and will also contribute to better connecting around 500,000 people (Pirot, Nišava and Toplica districts).

The future Niš-Durres highway will cover a length of 383km. The length of the first section, from Niš to Pločnik, covers 33km, while the second section – Pločnik- Merdare – is 37km long.

The section of highway from New Belgrade to Surčin (7.9 km) represents part of Corridor E-763 and a functional connection to the City of Belgrade. The contracted value of the project is €64.5 million, and the works contractor is the aforementioned CCCC, with which a commercial contract was signed on 18th August 2019.

This section comprises the initial section of Highway E-763 from Belgrade to the border with Montenegro and Belgrade’s connection to the highway.

A loan agreement for this project worth €100 million was signed with the European Investment Bank on 12th September 2019, as well an investment grant contract worth €40.6 million. Works on this section are expected to be launched in March 2020, with a deadline of 18 months from the start of the contractor’s activities (works are planned for completion in November 2021).

The Šumadijan Corridor, aka Vožd Karađorđe Highway, will cover a length of 220km long, though its length will increase to around 270km if this corridor is also connected with Corridor 10 near Mali Požarevac and with Corridor 11 viaMiloš the Great Highway.

The new highway will be in the form of the letter ‘Y’ and will connect districts and municipalities that are home to around a million people. On one side, the road will follow the route Mladenovac-Orašac- Aranđelovac, while on the other it will link Lazarevac and Aranđelovac, where it will connect and continue on to Rača, Svilajnac, Despotovac and Bor.

If the expressway variant is selected and there are no connections to the aforementioned highways, then the total amount could go from €1.7 billion to €2.3 billion, provided it is fully constructed as a highway, with connections to Corridor 10 and Miloš the Great Highway. The first steps in implementing this project are the formation of a working group for its implementation and the beginning of the preparation of project documentation. Works could begin during 2021 at the earliest.

With a tradition of more than 35 years, Dr Popović Dental Practice  is the only one in Serbia with Temos accreditation and a recommendation...
Read more