UDG is the University for the Future

Almost 13 years after its founding, the University of Donja Gorica operates on a campus of approximately 17,000m2, with five amphitheatres each containing more than 300 seats, a library with approximately 350 seats, around 800 computers, a laboratory, creative centre, art gallery, gym and much more

UDG’s mission is expressed through its motto “History of Future”, which practically means “producing the seed of the future”. By striving to respond with an innovative study model, UDG is dedicated to the student and to training them for both their professional rise and to be a responsible citizen of the globalised world.

We are increasingly able to hear that the classic university is in crisis and that new generations and new times call for different study methods. What is your view on this?

– It is evident that the classical university format is today in crisis. Thus, the questions to be posed are: how can one study and live in a world of rapid changes; a world where complete uncertainty reigns? How should studies be organised for today’s student, who will change professions 7 to 10 times during their working life – unlike their parents, who perhaps changed jobs twice, and grandparents who retired at the same workplace where their working life began? Moreover, life expectancy is extended for these generations, so a question arises as to what to install in the foundations of students’ character, their knowledge and skills, their value system so that these foundations endure that longevity. This is why education is facing great challenges today, and why it finds itself at a major turning point! The greatest danger is posed precisely by those reformers who know exactly how this process should be organised, how this new school and this University of the future should look.

Our students start getting used to being on top from the beginning, along with the realisation that the top is hard to reach, but even harder to stay on

UDG’s mission is expressed through its motto “History of Future”, which practically means “producing the seed of the future”. We try to respond with our innovative study model. First of all, more than any other university, UDG is dedicated to the student and to training them for both their professional rise and to be a responsible citizen of the globalised world. The most rigorous professor at our university is the professor called life, which means that we don’t teach our students about life, rather we put them in a position to learn from life, to learn by living. 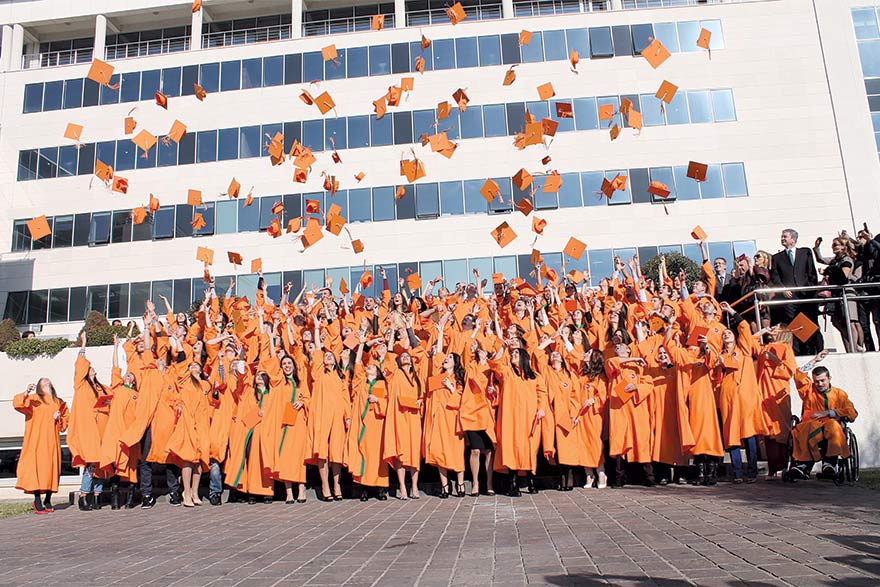 Unlike classical universities, which mostly function according to the model A=K (Ability = Knowledge), we are developing our A=K*i2 model, where the variable ‘i’ means learning by living, which is the student’s intensity of life during his studies. One knows only what one has experienced and felt. We prepare students for the rapid changes and uncertainties that I mentioned, and we invest a lot in our students’ confidence and into their passion for learning. Our classes start on the 4th of July each year, with the famous Lovćen race and the Rector’s lecture at the top of Lovćen, in front of Njegoš. They start getting used to being on top from the beginning, along with the realisation that the top is hard to reach, but even harder to stay on.

It is a fact that there is a certain prejudice against private education in this region. How do you see that and how do you fight against it?

– Yes, we are aware of that and the only way to fight against it is to show quality! First of all, it is important to note that two very distinguished professors from the State university, prof. Veselin Vukotić and prof. Dragan Vukčević, left their prestigious positions and founded the first faculties of what is today the University of Donja Gorica, as they believed in their idea and were convinced that they could create a system that would result in having young people capable of facing challenges in an increasingly challenging global business environment. Almost 13 years later, we can say that they succeeded in this mission, and the main reason for this success is that quality was the priority from the very beginning.

Even after graduation, our students continue to have the same system of values in their respective business environments

I would like to note that we started from just a piece of land in a field in Donja Gorica. Today we operate on a campus dominated by the UDG building of approximately 17,000m2, which has a modern design with an emphasis on possibilities for students to stay all day. We have five amphitheatres, each with more than 300 seats, a library with approximately 350 seats, around 800 computers used in daily teaching, the laboratory for testing food safety, a 3D laboratory, creative centre, art gallery, gym and much more. UDG has approx. 3,500 students and around 350 teachers and assistants from all continents, as it works on the principle of openness and cooperation with both the local and the global environment.

You mentioned international cooperation. Since you are a young university, do you have any problems participating in international projects?

– When it comes to research projects, both national and international, we are very proud of the results we are achieving. At the moment, whether in the role of partner or coordinator, the University of Donja Gorica is implementing over 40 projects, while about 50 project applications are in the evaluation phase. 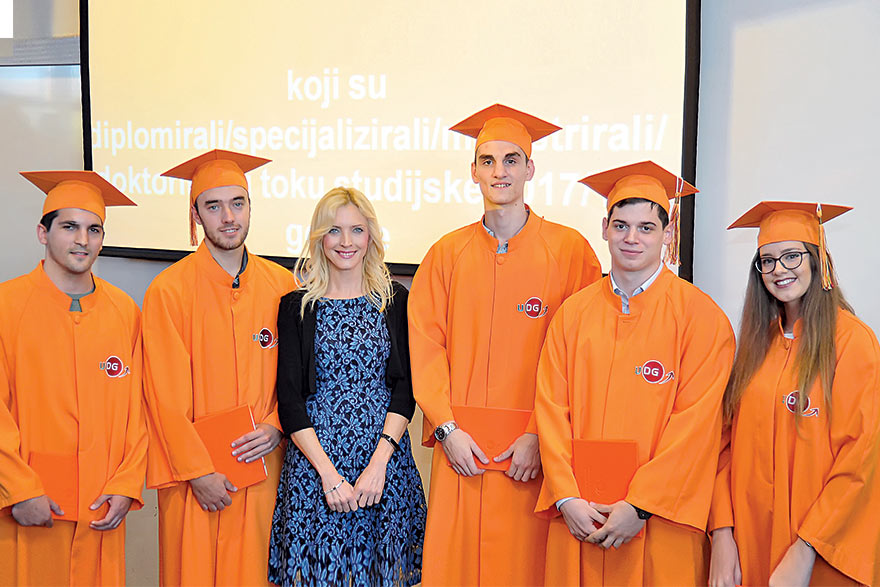 We are currently implementing projects from different programmes and are proud to highlight projects from H2020, IPA, Erasmus, Eureka, the World Bank, bilateral and national projects, as well as projects of the European Food Safety Agency etc. We are particularly proud that research teams gathered around the project themes and activities are multidisciplinary, with the specific requirement that those teams always include the participation of junior researchers and students.

You mention research projects and staff mobility. Do your students have the opportunity to participate in international exchanges?

– Our students have a very wide range of possibilities when it comes to international exchange, as well as international internships. There is a very small number of countries in Europe where our students have not had an opportunity to reside. Specifically, exchanges that currently open are for Portugal, Spain, Italy, Germany, Slovenia, Poland and the UK. Besides Europe, there is a significant international exchange with universities and companies from China and the U.S.

A large number of events, both national and international, are organised at the UDG throughout the year, many of which have become traditional. Which of the events from the previous year would you like to single out?

– When it comes to traditional events, I would like to mention: Christmas discussions, where a current social topic is discussed, with prominent individuals from the region as speakers; Entrepreneurial Ideas Exchange, which is an event at which distinguished Montenegrin businessmen buy business ideas from students from the wider region; Factory of Knowledge, the biggest educational IT event in the region, organised together with Belgrade-based company Comtrade within the Days of Science week; as well as the Free Market Road Show, which is a series of conferences held in over 40 European and American cities, organised by the Austrian Economic Centre.

I would like to further mention three events from the previous year. First, the opening of the Entrepreneurial Nest, which is our laboratory for awakening the spirit of creativity, innovation and entrepreneurship for all UDG students. Secondly, I would like to mention the conference on the importance of investing in early childhood development that was organised together with UNICEF. Lastly, I must point out the awarding of a grant for establishing the Centre of Excellence in food safety.

You have already pointed out that your students work in highly responsible positions, both in the private and public sectors, in the country and abroad. Does such success create an obligation? Or, to put it differently, is UDG a socially responsible university?

– UDG is very socially responsible. I am limited here by space, so I will just single out the fact that UDG, as a private university, allocates about half a million euros annually for scholarships to students (holders of the “Luca” diploma, tuition fee discounts for a second child and scholarships for third and every subsequent child from the same family; scholarships for students with disabilities, and sports scholarships). When it comes to sports scholarships, I would like to mention that we are sponsors of the Women’s Handball Club “Budućnost”, which has been a two-time European champion during the last ten years.

A spectacular visual biography of the life and work of Le Corbusier – one of the twentieth century's most influential architects A decade after its...
Read more