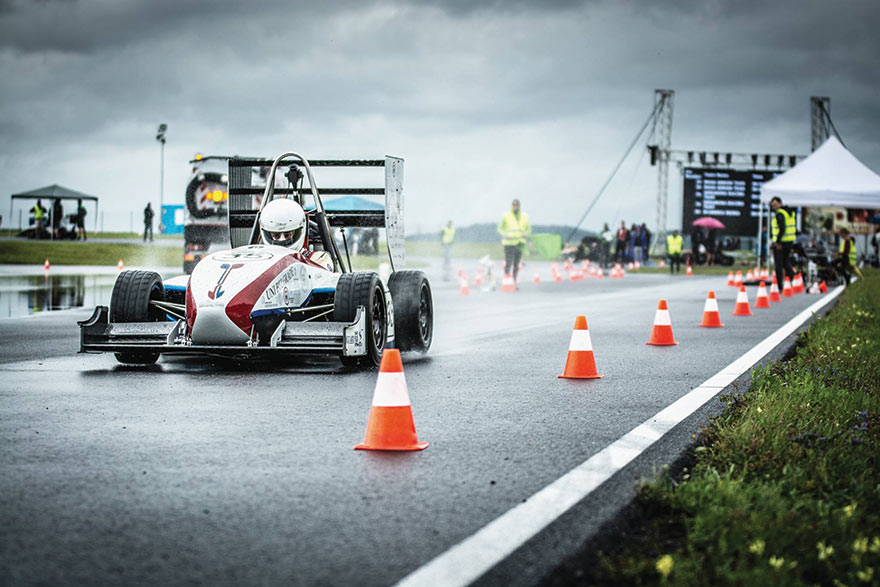 Where The Engineers Of The Future Develop

An electric racing car, a solar-powered catamaran for collecting waste along riverbanks, drones, small autonomous robots, detecting cancers and melanomas with the help of light – these are the projects currently being developed by students of the Faculty of Mechanical Engineering and their peers from other faculties of the University of Belgrade.

With their innovative engineering solutions, these young, creative people are achieving top results at international student competitions and are on a par with the teams of the world’s leading universities. They are actually often also ahead of them.

Under the conditions of ever-increasing competition on the international academic scene, with the world’s leading universities innovating their study programmes and introducing content that implies the development of practical abilities, it is very important for Serbia to keep pace with the rest of the world in this area, and to take its place in the highest echelons of higher education. One way of achieving this is precisely by supporting young and talented students in working on tangible projects that enable them to develop the necessary skills and successfully implement their ideas on the market.

In order for creative academics to enable this, the Faculty of Mechanical Engineering established its Student Excellence Centre. This provides future engineers with space to create and further develop their ideas, and to ultimately convert them into genuine product prototypes.

The Student Excellence Centre is housed in the “old building” of the Faculty of Mechanical Engineering in Ruzveltova Street. There are five student teams currently working in this renovated and modern-equipped space, which encompasses an area of 500m2. Apart from FME students, projects also include the participation of academics from other faculties of the University of Belgrade – Electrical Engineering, Technology and Metallurgy, Architecture, Law, Economics, Organisational Sciences – as well as the Military Academy, the Academy of Applied Arts and others. In that sense, the Student Excellence Centre has great importance not only for the Faculty of Mechanical Engineering, but also for the entire University of Belgrade.

“ROAD ARROW” – BIRTH OF THE AGE OF ELECTRIC VEHICLES IN SERBIA

The team that has the longest tradition is called Road Arrow – the first and most successful Formula Student team in Serbia. These young fans of Formula 1 have already spent ten years been designing and building racing cars for Formula Student competitions held across Europe. They have under their belt eight racing cars with internal combustion engines and more than 20 competitions at which they achieved enviable results, recognition and praise from experts of the world’s leading automotive industry players.

The COVID-19 Pandemic led to last year’s competition plans being postponed, but that didn’t discourage these talented youngsters from dedicating themselves to new challenges. They are currently finalising testing of their vehicle for the 2021 season, during which they are awaited by four competitions – in Italy, Hungary, the regional competition in Croatia and the most prestigious competition held in Austria, on the famous Red Bull Ring circuit.

The Road Arrow team is this season premiering its first electric-powered Formula Student class vehicle, for the purposes of which the team developed unique lithium-polymer batteries and other original solutions. The team will compete in the competition of internal combustion engine Formula vehicles with its ninth successive racing car, which has a significantly improved performance as a result of the application of the most innovative construction design and technological solutions.

“BEOAVIA” – THE HOPE OF SERBIAN AVIATION

Beoavia is a student team that deals with the design, development and production of unmanned aerial vehicles, aka drones, for international competitions in the domain of aviation. The team recently qualified for the finals of the Airbus Sloshing Rocket Competition 2021. Its “Aurora 2” rocket solution was declared the best in the first round of this competition, which included 20 competing teams from around the world.

Members of the Beoavia team are also engaged in two other projects. The project with the symbolic name “Phoenix” is developing a cargo UAV for Munich’s “Air Cargo Challenge 2021” competition. Presenting a special challenge for the team is its project to develop a solid-propellant rocket, called “Pupin K12”, with which it will make its debut at the upcoming Teknofest in Turkey.

The future shipbuilding engineers who are gathered together in the Confluence Belgrade team are working on the development of advanced, energy efficient and environmentally friendly vessels. They are extremely proud of their first projects: the electric-powered boats “Sava” and “Danube”. These projects brought the team numerous medals at the prestigious “Hydrocontest” international competition, where they won first place in the category of heavy-lift cargo ships in 2018. The members of this team are currently working on the “Sava Eco” project, which is developing a solar-powered catamaran intended to collect refuse and other waste from rivers and other bodies of water and their shores.

The students of the University of Belgrade Faculty of Mechanical Engineering who come together in the Robotoid team are working to develop and produce small, autonomous mobile robots for EUROBOT – an international contest in the field of robotics. The team secured sixth place at this year’s national competition, held in Novi Sad, in competition against the country’s 11 best teams. Designing and building an autonomous mobile robot is a very serious and demanding undertaking for students who exert a lot of effort to raise their device to a competitive level. There are numerous challenges to overcome… In order to be able to participate in the contest, robots must go through so-called homologation. This means confirming their complete autonomy in terms of energy and operation, as well as the ability to perform tasks and solve emerging situations independently.

The young researchers included in the BMI/ ZeptoHyperTech team are working on the development of innovative products in the field of biomedical engineering that are intended to improve both health and quality of life. The research is focused on the quality of air, water, food, dynamic human activities etc. They are currently working on the early detecting of cancers and melanomas with the help of light, the therapeutic effects of light, the impact of negative ultraviolet and blue light radiation, the improving of existing air and water purifiers and food preparation processes, the structures of various types of beds for patients and several orthopaedic aids.

THE AIM IS TO EDUCATE TOP ENGINEERS

“Since its establishment, the Faculty of Mechanical Engineering has been providing its students with top theoretical knowledge. However, in the world of high technologies, that is no longer sufficient. A contemporary engineer must also possess practical abilities, as well as other professional and personal skills. It is expected that education encourage innovation, creativity and the entrepreneurial spirit among young people.

That’s precisely why we established the Student Excellence Centre. Our maxim is “THE STUDENT AT THE CENTRE OF LEARNING”, while the aim is to educate top experts who will be ready to respond to future technical and technological challenges, says Radivoje Mitrović Ph.D., Dean of the Faculty of Mechanical Engineering.

CREATORS OF THE FUTURE

“Road Arrow is a team of students, but, for me, these young people are already proven engineers, economists, marketing experts etc. I’ve watched them in action during competitions across Europe, when their performances raised my professorial pride, but also our national pride, to the maximum limits. First and foremost, they demonstrated superior innovation in their technical solutions, limitless resourcefulness in their economic analyses of the project and unprecedented authoritativeness in design presentations. It is due precisely to their enthusiasm, strength of will and engineering enthusiasm that they are the agents in the fantastic future that I see when I’m with them. It is a privilege and an honour to be their mentor,” says Marko Miloš Ph.D., mentor of the Road Arrow Formula Student team.

Art Is The Best Way To Promote A Country

It is invaluable that Serbia is nurturing its creative people and creative industries, and that this is recognised abroad, given that we really have...
Read more

We Need To Believe In Ourselves

What helps us to uncover the values of the modern Serbia is the increasing public presence of the results of the work of creative...
Read more

“Modern Tradition” Is The Key Element Of Serbia’s Image

The most important thing for Serbia’s image is probably the fact that there have been an unbelievable number of successful start-up projects, creative people,...
Read more

Today’s technologies allow us to very quickly modernise the country’s image and shed light on our multitude of young and successful creatives who will...
Read more

Many Opportunities For Academics

DAAD offers several types of scholarship for each level of study. Excellent students from Serbia can apply. In addition, DAAD scholarships are aimed at...
Read more

On Sunday, 12 June, the BIS celebrated its 25th Anniversary at the White Palace in Belgrade. On this special occasion, the Guest of Honour...
Read more

How Can We Reinvent Ourselves?

With rapid digitalisation, the need to address the skills gaps is more urgent than ever. For policymakers, this is not only an issue of...
Read more

Implementing Reforms At All Levels Of Education

By adhering to the framework established under the Education Strategy 2030, the Ministry is working – in cooperation with numerous partners – to create...
Read more