Enver Gicić PhD, Dean Of The Faculty Of Islamic Studies

Guardian Of Tradition And True Values

Secondary school graduates who pass the entrance exam can also this year enrol in one of four basic study courses – Islamism, the Sharia and Law course, the pedagogy and communicology course and the course for Islamic economics and halal standard

Thanks to staff members who also studied at the Faculty of Islamic Studies (FIS), students of the FIS are educated in the spirit of the times and the area in which they live and in which they will work and function in the future.

The Faculty of Islamic Studies in Novi Pazar continues the tradition of Sandžak’s first religious-educational institution, established in 1461, when the foundations of Novi Pazar were laid and the Isa-bey (Isa-Beg) mosque was built, and alongside it the first sibjan-mekteb (school for children). What has remained the same and what has changed over the course of these many centuries?

– The valley of the Jošanica and Raška rivers has for centuries been a meeting point for different cultures which, despite numerous challenges, still witness the sustainability of coexistence with others and those who are different.

The first mosque of Ghazi Isa-Beg Ishaković, alongside which the first sibjan-mekteb was built, representing the precursor of institutional education in Sandžak, emerged in the atmosphere of the dynamic coming together of the faith of “Dobrih Bošnjana”, or Bosnian Christians and Christians of the eastern and western provinces.

After the mosque was destroyed in the late 1930s, the Building of Islamic institutions was erected, and since 2006, in accordance with the decision of the Mushihat of the Islamic Community in Serbia, as the founder, it has housed the Faculty of Islamic Studies.

Apart from being a place for education, academic advancement and teaching of religious personnel, it is consistent with the universal values of cultural heritage pluralism. Testifying to this is the fact that among the numerous guest professors at our Faculty was the late Radovan Bigović Ph.D., from the Belgrade Faculty of Theology, as well as Catholic Archbishop of the Belgrade Archdiocese Stanislav Hočevar.

Under what kind of conditions do your lecturers and students work?

– After expanding the spatial capacities of the building of the Islamic institutions, where conditions for studying were fairly modest, today we can boast of having almost 2,000 square metres of high-quality space.

Alongside lectures, students can also take advantage of a modern amphitheatre, foreign language learning laboratories (Arabic, English, Turkish) and, as of this year, also a large library with a collection of around 30,000 titles and a reading room.

Within the building, there are also professors’ cabinets, space for the faculty’s management and a hall for meetings and prayer.

The Faculty of Islamic Studies has a status that is equal to other faculties and higher education institutions in Serbia. Do you receive assistance from the state and the ministry? 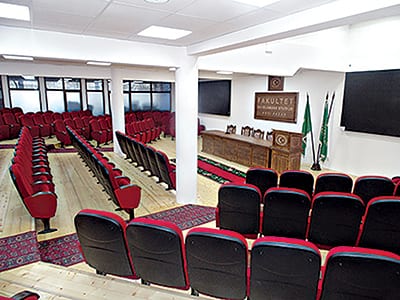 Apart from this Office providing a certain number of scholarships for bachelor’s and master’s studies, we also cooperate with it on projects that are significant for our institution and the Islamic community.

The most important project agreed upon during the visit of the Director of the Office for Cooperation with Churches and Religious Communities is cooperation with the Centre for Interfaith Dialogue, which exists within the framework of our Faculty. We hope this cooperation in the period ahead will be raised to a higher level, in order for our students to feel completely equal to all other students in the country.

A new deadline for enrolment is approaching. Who can enrol in FIS? Is it difficult to pass the entrance exam?

– Considering that Novi Pazar has become a university centre, and bearing in mind that, following the founding of the Faculty of Islamic Studies in 2001 (then the Islamic Pedagogical Academy), the International University was established in 2002, which was the main reason why the city gained a state university four years later, we are obliged to maintain a constant enrolment campaign.

Enrolment in our college is open to all those graduating from four years of secondary school who pass the entrance exam, which – in view of the knowledge with which they come – does not represent a major problem for most.

We teach our students the principle that someone who is sure in his own values has self-confidence, breadth and the awareness to hear and respect differing opinions in the spirit of tolerance

Your faculty cooperates with numerous Islamic higher education institutions worldwide. Has the problem related to providing work permits for professors from abroad been resolved?

– The faculty was admitted as a full member of the Federation of the Universities of the Islamic World, which operates under the auspices of the ISESCO, an organisation founded by the Organisation of Islamic Cooperation. This has enabled us to maintain more intensive contacts with almost all renowned Islamic universities around the world.

We were initially compelled to rely on professors from the region, particularly from Bosnia, while today we have our own staff, educated at the International University in Novi Pazar. This enables us to effectively implement all planned teaching activities. 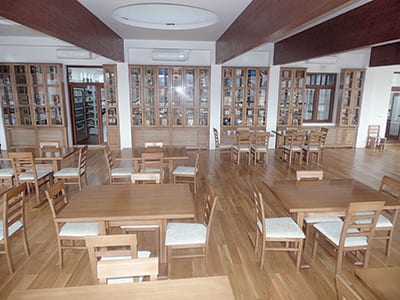 In cooperation with the embassies of Muslim countries, especially Arab countries, in Belgrade, we provide proof-readers for foreign languages. Last year, through the mediation of the Embassy of the United Kingdom and the OSCE, we hosted a guest professor from the University of Cambridge, as well as experts from the British government who deal with the issue of extremism. They were extremely satisfied with the level of education and awareness of our students when it comes to this challenge that we are all facing equally.

We collaborate very closely with all major Muslim educational institutions throughout Europe and the United States, but also in Turkey, where we have a signed Mevlana exchange programme agreement on cooperation.

How far have you progressed in the process of obtaining accreditation? Will a decision in this regard be made on a professional or political basis?

– We work in accordance with the Law on Churches and Religious Communities, which stipulates that secondary religious schools and faculty are not obliged to enter the accreditation process. Regardless of that fact, we are ready to launch the accreditation process from this moment and we would like to believe that the negative experience of the International University didn’t benefit anyone, except those who – in a moral-ethical sense – should have been far away from the higher education system.

The Faculty of Islamic Studies has four basic study directions. Which of them attracts the greatest interest?

What makes your Faculty so special?

– If we were to seek something that we are extremely proud of, that would certainly be the authentic scientific-educational interpretation of the Islamic faith, in the spirit of preserving tradition and facing the challenges of the modern era, with the experience of academic representatives of Europe’s autochthonous Muslim nations.

Generali announces the Fenice 190 project, a five-year investment plan worth €3.5 billion to support the recovery of European economies from the effects of...
Read more

When we read or hear ‘base metals’ and ‘Serbia’ in the same sentence today, the usual association is with the many media articles that...
Read more