Goran Kovačević, President of NALED’s Managing Board and CEO of Gomex Company

We Have the Formula for Reform

NALED is the first organisation to truly succeed in consolidating and synchronising the work of the private and public sectors and to ensure that its main objective is comprehensive and commonly accepted: to create a business-friendly environment that will provide a better life for all Serbia

Two important facts make NALED a notable organisation. NALED has chosen the right issues to deal with and has formed an efficient team that has the right skills to create concrete proposals – says Goran Kovačević, the newly elected President of NALED and CEO of Gomex.

NALED has attracted companies with substantial professional capacities, local governments that have a fresh take on old issues and successful civil society organisations. It has also presented its ideas to decision-makers who no longer see NALED as a competitor but rather as a partner. This fact alone marks a huge step forward in the development of our society and our country because it opens many reform perspectives for us.

To achieve success in any undertaking, you must have the will, the knowledge and the means to accomplish your goals. NALED has responded successfully to these challenges and has become very efficient as a result. This level of efficiency, which is based on commitment and professionalism, is what NALED is known for and what sets it apart from other civil society organisations.

Persistence is another key element: if an institution closes its doors to us, we don’t see this as a reason to give up, but as a challenge. And finally, the concepts of partnership and alliance are motivating factors for us.

We are all happy to be here and each member is given the opportunity to be heard and to proudly declare that he or she contributed to concrete reforms. We do not concern ourselves with individual interests but with the common good.

How does NALED formulate and implement reform initiatives?

NALED forms its initiatives after consulting a wide circle of individuals with relevant expertise. These may be NALED members, external associates, partner organisations (domestic and foreign) or anyone with the required know-how. For instance, companies operating within a specific sector facing a specific issue or those badly affected by changes in regulation are notified in good time and invited to propose concrete solutions.

We have also formed expert working groups such as the Fair Competition Alliance, the e-Government Alliance and the Food Safety Alliance to further increase our operability and efficiency. Information collected in this way is sent to the Executive Office expert team who then conduct further analyses to devise an initial proposal which is then re-examined and debated before becoming a joint initiative.

Proposing a solution is not easy, knowing that the solution will have an effect on thousands of people, all with varying interests. On the one hand, you need to be aware that every solution brought forth is bound to be met with the dissatisfaction of certain interest groups; on the other hand, this is not a reason to refrain from taking action but should serve to ensure that your approach is cautious and nothing but professional.

Which of NALED’s results in the last 10 years would you like to single out as most important?

Indeed, NALED has accomplished some important results over the last ten years – from consolidated tax collection and other simplified bureaucratic procedures to the certification of local governments and the introduction of electronic building permits. We would especially like to underline the Programme for Countering the Shadow Economy. 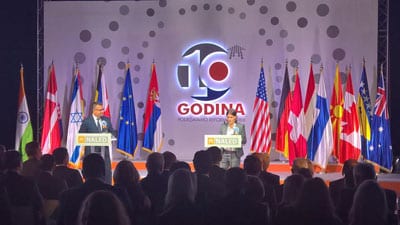 Shadow economies are a form of cancer that eats away at impoverished countries. While steady employment maintains structure in society, we know all too well that shadow economies create environments that prolong poverty. This is a chronic disease, one that cannot be eliminated overnight. However, all public stakeholders have expressed their willingness to tackle this issue permanently, and not just ad hoc.

Although I have mentioned a few of our programmes, I think that NALED’s biggest success lies in altering the relationship between public authorities and business. NALED is the first organisation to truly succeed in consolidating and synchronising the work of the private and public sectors and to ensure that its main objective is comprehensive and commonly accepted: to create a business-friendly environment that will provide a better life for all Serbia.

This is the first time in its history that the Government of Serbia has formed two working groups with the civil sector, which has concrete tasks and jobs to complete and contributes to faster decision making.

How difficult is it to motivate state bodies into action and explain to decision-makers why the measures you propose are beneficial for society as a whole?

Generally speaking, motivation alone is not a problem. People are very quick to grasp the benefits of many proposed measures. The problem lies in implementation. After the first wave of enthusiasm, many begin to realise that changes will affect their habitual way of doing things and could jeopardise individual interests. In this regard, we are no different from any other country. There is always a fear of the new, and a deep-seated belief that the old way of doing something is better. This is where a well-prepared project comes in handy.

To achieve success in any undertaking, you have to have the will, the knowledge and the means to accomplish your goals. NALED has responded successfully to these challenges and has become very efficient as a result

A good project has to anticipate potential problems and how to resolve them. And when there is enough political will present in the establishment, success is inevitable. Personally, I am quite surprised at how quickly the electronic issue of building permits has been implemented, which just goes to show that we are not as bad as we think we are. This reform has revolutionised the work of administration, proving that civil servants are capable of adapting to new trends and technology despite the fact that many had not even begun using e-mail until recently. This experience also demonstrates that the coming reforms are quite enforceable.

What are NALED’s key reform goals in the next few years?

Our society has experienced some very turbulent times. Many mistakes have been made for both objective and subjective reasons and as a result, the goals have become crystal clear.

We have to form a strong public administration that will deal professionally with problems affecting people and businesses. We have to reform public enterprises to make them efficient publicly owned companies, rather than allowing them to drain the state budget. We have to create a business environment that will encourage the general public to start their own small, but successful businesses. 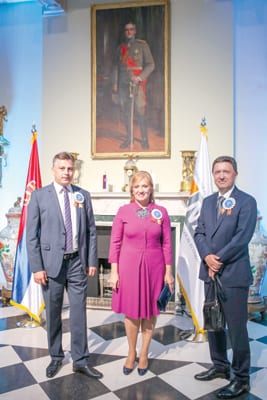 We have to strengthen our institutions, especially the judicial system so that they can guarantee the full and timely protection of individuals and companies in accordance with their rights guaranteed by the Constitution. I have said “have to” four times because I think this is no longer a time to discuss but to act.

Innovation also needs to be intertwined with each segment of the business. If we wish to become an equal member of the European family and not some destitute cousin from the countryside, we need to speed up progress. The only way to achieve this is to be innovative and find our own unique way of functioning that will catapult us onto the market.

One of the main goals of our organisation is to successfully implement the National Programme for Countering the Shadow Economy. The second important goal is to develop e-government as a tool for improving public administration and boosting competitiveness. We want to develop new services, introduce an e-payment option, replace paper with e-documents, form a network of institutions and ensure that they exchange information, eliminate old-fashioned counters, introduce an electronic fees and charges registry, develop the existing e-space system for drafting spatial planning documents (a vital part of the process of issuing building permits) and to move our Business-Friendly Certification Programme into the electronic domain. In short, we need to improve communication between the public, private and civil sectors and base our development on three pillars – responsibility, transparency and efficiency.

What will be the strongest challenges for NALED and the Serbian civil sector generally in future?

The challenges will be both external and internal. For some time, we have been living in a drawn-out global economic crisis. This is a very connected world where disturbances on one continent affect all others. If the global economy is developing, we too are going to have an easier time.

I see NALED as a well-oiled, problem-solving machine; a place where various stakeholders gather to contribute to future goals and activities by providing expertise. I see it as a responsible partner to state structures and the guardian of entrepreneurial freedom

Internally, a lot hinges on political and overall social stability. We are going to have to make some tough decisions. Many companies will disappear, many people will lose their jobs. We have to be wise and decisive in implementing the necessary measures in the shortest time possible with the fewest number of transition victims. Solutions of all kinds are possible and the civil sector needs to be cautious and assist in optimising funds. The burden should be equally distributed among all interest and social groups and we must never forget that economic efficiency must remain connected to humanity at all times.

Where do you see NALED in 10 years?

I see NALED as a well-oiled, problem-solving machine; a place where various stakeholders gather to contribute to future goals and activities by providing expertise. I see it as a responsible partner to state structures and a guardian of entrepreneurial freedom.
The time has come for the civil and private sectors to take over from the state in certain aspects, aiding the country in taking more than one step at the time, all in society’s best interests. We have already demonstrated that this is possible in Serbia.

A ‘free market’ is frequently mentioned these days, often in a negative context, and it is usually accompanied by the idea of a planned, conflict-free society. History has proven this to be a utopia. NALED has to defend the right of every individual to work and make mistakes.

The right to make mistakes is a fundamental right. Not so long ago, people were burned alive for claiming that the Earth was not flat. In those times this idea was considered fundamentally wrong.