The release of the obligation to pay corporate tax on investment would lead to the development of a complete recycling industry and the creation of a large number of jobs. We had this, but it was abolished in 2013, so investments were halted

Jugo Impex, one of the leading companies in Serbia engaged in the purchase and processing of raw materials, the recycling of electrical and electronic waste, advocates a more consistent application of the law, reviving of the Green Fund, which was established a year ago, and opening new processing plants.

Among other things, Jugo Impex is engaged in purchasing and processing raw materials and recycling electrical and electronic waste (EE waste). This sector of the economy has great global importance, but what is its status here?

– Recycling of electronic waste is a very demanding task, both technically and in the level of education of the whole of society. New recycling technologies are being made and changed globally on a daily basis in line with the development of modern electrical and electronic devices, and this area is only in its infancy. For predicting global trends and development, a predictable business climate is needed.

A year ago a Green Fund was established, a new budget line for environmental projects as a requirement for the opening of Chapter 27. What results has the Fund achieved so far?

– The Green Fund is not yet alive, although it is a major condition for the work and development of the recycling industry. As an eco fund, it will support all projects in the field of recycling and environmental protection. Every green dinar collected from the eco-tax goes into the Fund, it is paid for recycling and financing environmental projects.

This should be its primary purpose, but our Green Fund has not yet come to life, i.e. the green dinar has not yet been separated from the central state budget, even though it was deliberately created for that by the Law on Environmental Protection and Waste Management. If the new law on fees that is currently out to public debate does not provide for the green dinar to go directly to the Green Fund, we will have the same problems again.

The Green Fund is not a cost to the budget of the Republic of Serbia, but investment in all segments of the society. The idea is that the Fund serves to preserve our health, provide raw materials for processing and strengthen all industries

How much help does Jugo Impex get from the Green Fund and can the Fund be a driver of Serbia’s economy and development?

– The Fund has an investment rather than a consumer nature. When you look at the strongest European countries like Germany, Sweden and Norway, you will see that their recycling industry is the most developed. Recycling in those countries is so high that Germany, for example, no longer needs any ore to manufacture cars as they work with 95 per cent of recycled raw materials. When you see all this and when you understand what is happening, you become aware that the time of urban mining has come, but that we have not yet got hold of it. Besides the state’s strategy and the Ministry of Ecology, the Green Fund can be a great flywheel of our economy and achieving the right European standards.

In Germany, about 90 per cent of waste is recycled, and in Serbia about 10 per cent. What is the problem? Lack of waste, lack of recycling plants, grey economy, legalisation …?

– You have listed three things, the most important being the legislation. We have the laws but the problem is their application. It would be much better if all adopted laws were implemented quickly and efficiently. There is one thing missing in the legislation, and that is the release of the obligation to pay corporate tax for investments in the recycling industry. We had this, but it was abolished in 2013, so investments were halted. If you invest in new technologies from the current year’s profits, you burden them with corporate tax, which hampers the entire development of the recycling industry. 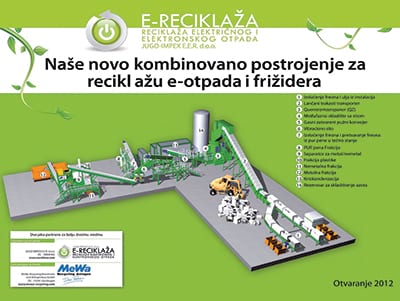 Gray economy exists exclusively in the green list waste, but it is insignificant for the development of the recycling industry. With the new legislation on the control of exports of strategic raw materials from Serbia, the grey economy will disappear in that part, because when there is no export of waste iron, it will be difficult for washing machines to end up on a landfill that deals with collection and processing of iron.

Lack of plants is a major problem and because of it we do not recycle, and it is connected primarily to legislation and predictable business. We currently do not have any high technology in Serbia for separating rare metals and minerals, and we send all the waste that is rich with these elements to Germany and sell. It would be justified if this was the second year of recycling in Serbia, but we are years behind with implementing modern technologies, and I ask, “Why is that?!”

At the moment, there is not a single plant in Serbia with high technology for separating rare metals and minerals, and we send all the waste that is rich with these elements to Germany and sell

EE waste recycling is economically unjustified because you receive eco-tax reimbursement for recycling after one year, so you finance your business with the help from commercial banks, which leaves no room for development. How could the state solve this problem?

– Yes, you are right, that is the biggest problem here. You do not have room for investment, because the funds you can invest you have to use to pay interest rates for your current business. If the recycling is paid quarterly, as inspection supervision is carried out, we would be in a much better position and the investments in new technologies and development would be continuous. This is the basic condition for predictable business in our industry.

In the recycling industry in the developed parts of the world, new jobs are being created all the time. Do you believe that one day we will get to this point, and when?

– New jobs are being created all the time in our country, but this number is insignificant compared to what it could and should be. The recycling industry creates new raw materials that need to be processed and converted into finished products.

Ten years ago, the amount of plastics, plastic parts and various types of plastic masses in our market was very small, and so there was almost no recycling industry for it. Now we have surplus plastic and, despite several open plants, we have to export it.

This also happens with many newly created values, that is, with raw materials that we do not process in our country. I think that all of us will soon realise the importance of the circular economy, recycle → produce, and that in this process we can become a flywheel of the economy and a generator of new jobs.

We assume that you are travelling a lot for business … Is Serbia a dirty and polluted country compared to the region, even Europe, or are we not as bad as we often think?

– It is difficult to answer this question without being honest. When you take a look around, a lot has changed, but we still have ecological bombs, the problem of old landfills that we need to solve as soon as possible. In 2010, I visited the recycling system of the city of Graz in Austria and their processing of wastewater from the sewage system.

One of the fascinating things I saw was that they released the processed water in the river Mura, where even trout live today. The water they release is of PH5 quality because even then they found a way to eliminate hormones from contraceptive pills that cause sterility in fish from wastewater.

1st Place For Most Gender-Sensitive Company

Insurance company Generali Osiguranje Srbija is this year’s recipient of the Award for Most Gender- Sensitive Company. The award was presented on 28th October...
Read more