The Circular economy represents an approach that...
Read more

Greening our economy is not a luxury;...
Read more

We Don’t Rush – We Work Thoughtfully

In order to be ready to commence...
Read more

We have a large number of positive examples of good cooperation between companies and the Agency when it comes to reporting on environmental impacts, but there are also negative examples.

By harmonising legislation with EU regulations, the differences between environmental management in our country and elsewhere in Europe are falling rapidly, which means that all companies operating in Serbia will have to comply with environmental regulations, as is the case in other countries

The reporting period for 2017 is about to end, by which time companies should inform the Environmental Protection Agency about the impact of their operations on the environment. We spoke with Filip Radović, director of this agency, about the way companies and local governments respect their legally prescribed obligations.

There are two phenomena in Serbia: enormous amounts of waste collected by the utility companies at landfills, while our recyclers do not manage to fill up their plants. Why is waste collection still the weakest link in the recycling chain?

Under the Law on Communal Activities, this work is entrusted to local self-government. A number of them report to the Agency that they have 100% waste collection on their territory, while others have not yet implemented the plans that do exist.

Plastic bags are part of this waste that is undoubtedly the cheapest but also the most difficult to decompose. Why does our country, despite individual actions of cities or large shopping centres, have no unique institutional response to this serious environmental problem?

– The share of plastic bags in municipal waste in Serbia is about 4%, while they are completely eliminated in some other countries. This primarily relates to plastic carrier bags that we receive in supermarkets and markets. 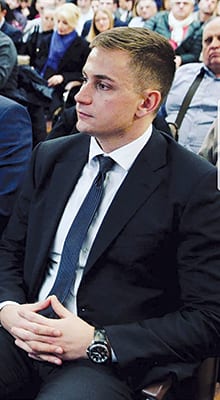 Other waste fractions also have a significant impact on the environment. It is a well-known fact that it takes more than 500 years for an aluminium can to decompose while processing a tonne of aluminium results in energy savings of 90 to 95%. The recycling of newsprint paper preserves 17 trees in nature while recycling the same amount of office paper preserves 24 trees and saves over 4,000 KW of electricity and 32,000 litres of water. This is similar to glass and PET packaging, with significant savings in energy and other raw materials.

We also need to point out that these characteristics ensure almost all fractions of municipal waste have a certain financial value, which is why we often state that waste is essentially not waste, but a group of new resources, i.e. secondary raw materials that can significantly replace the country’s natural resources. Another important aspect is the social aspect of waste management, which is manifested through the formation of an official network of collectors and operators treating these types of waste. There is also the prospect of establishing SMEs to deal with waste collection, preparation and recycling.

With the latest amendments to the Law on Environmental Protection, the Agency is now allowed to prepare requests for initiating misdemeanour proceedings against companies that do not comply with the prescribed obligations

Are there any legal requirements regarding the companies responsible for the environment? For instance, are foreign companies that come to Serbia “more disciplined citizens” than local ones or not?

– It doesn’t matter if the company is foreign or local. Whether the company will be socially (and ecologically) responsible or not all depends on the attitude of the management. Many foreign companies came to Serbia with already applied principles of environmental management, which are also efficiently applied here. But there are also those that avoid applying the same principles in Serbia that they apply in other countries. The same goes for local companies.

From the aspect of environmental impact reporting, for which our Agency is responsible, there are many positive examples of very good cooperation between companies and the Agency, but there are also cases when companies do not want to cooperate with us. The most frequently asked questions are – Why are you collecting this data; or Will another tax or similar charge be imposed on us? With the latest amendments to the Environmental Protection Act, the Agency is now allowed to prepare requests for initiating misdemeanour proceedings against companies that do not comply fully with their legally prescribed reporting obligations.

One positive domestic example is EPS, which has signed an agreement with the Agency on long-term business and technical cooperation. What would you single out as tangible successes after a year of implementation?

– Electric Power Industry of Serbia (EPS) is one of the most important partners of the Environmental Protection Agency, from the aspect of reporting on the impact of EPS facilities on the environment. All thermal power plants of more than 50 MW are included in the PRTR register of the Agency, i.e. the Register of large pollution sources, and they all report in accordance with legislation. Smaller facilities are covered by other registries kept in the Agency, where the majority meet their obligations.

The largest generators of waste are thermal power plants, which annually produce coal ash in the amount of 6.2 million tonnes, which is 75 per cent of total waste produced. Others have done a serious business out of processing coal ash, what do we lack?

– We should emphasise straightaway that ash from thermal power plants and similar waste, such as slag, comprises 75% of industrial waste produced, and not of total waste, which also includes municipal waste. Ashes are deposited on mounds near facilities, as is the case in Obrenovac and Kostolac.

It can be used in many ways and is most often used in road construction through its incorporation into the roadbed. What Serbia lacks, in my opinion, is research on possible uses of this type of waste for various purposes, increasing the level of cooperation between those who generate such waste and potential users, and the exchange of experiences with users of ash from thermal power plants in other countries.

According to our information, there are over 2,500 illegal and old landfills in Serbia. What does the Agency do to get the right information about them?

– There’s indeed a large number of illegal and old landfills in Serbia. In order to obtain complete and precise data on the state of affairs in terms of solving this problem, the Agency, together with the Ministry of Environmental Protection, has prepared and adopted the Rulebook on the Manner of Keeping and Designing Records of Landfills and Dumpsites Records in the Area of the Local Self-Government Unit, published in the Official Gazette No. 18/2018.

To facilitate the reporting and balance the entire process of representatives of local self-governments, the Agency has prepared a special module of the information system of the National Register of Pollutants for the purpose of reporting on landfills or dumpsites.