Ideal pore size and pore distribution, as well as extra high carbon content, makes this charcoal specific in supporting animal growth. The effects in the animal are improved health and the balanced coexistence of microorganisms in the stomach. The animal’s body can “concentrate” on its main tasks, like “growing” and “metabolising food”, instead of fighting disturbances caused by illnesses or toxins.

The charcoal can be applied to all kind of animals, such as pigs, cows, chickens and fish.

As a result, the administering of antibiotics can be reduced and there is a clear improvement in meat quality: reduced medical and antibiotic residue, better meat-fat ratio, more unsaturated fatty acids and less cholesterol.

For the farmer, there are many immediate positive knock-on effects, like reduced odours in stables and easier handling of manure due to its homogeneous texture. However, the more important effects from an economic perspective are an increased fodder conversion rate and reduced veterinary costs. 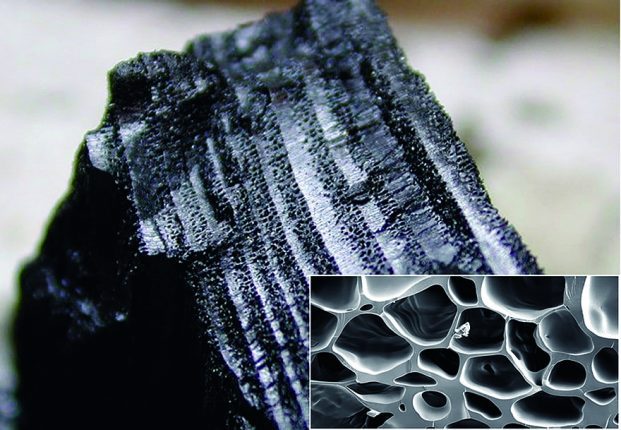 Furthermore, the charcoal doesn’t disintegrate in the intestines, but rather accumulates in the manure, where it is charged with essential plant nutrients and improves the fertilising effect over the long term. Eventually spread on the field, it builds up humus and equilibrates humidity during dry periods. It also prevents pesticides and nitrates from leaking into groundwater.

Looking at the big picture of applying charcoal to animal feed, it has a positive impact on the Greenhouse Effect by sequestering CO2 from the air.
During the growth of a tree, for example, CO2 from the atmosphere is assimilated into plant material via photosynthesis. The tree (it’s wood) will later be converted into charcoal. In this process, the C-atom from the assimilated CO2 is embedded in the carbon grid of the charcoal and ends up in a very stable form. At high carbonisation temperatures, the charcoal will not disintegrate for centuries – not even in an animal’s body.

Moreover, free energy can be exploited during the carbonisation process and used to produce heat or electricity. As a whole, this concept is not only “Carbon Zero”, but actually “Carbon Negative”!

The application of semi-activated charcoal can shift the reputation of agriculture from being the scapegoat for many environmental problems to actively contributing to a healthier environment on the basis of climate farming. With the integrating of charcoal into production processes in Central Europe, there are already entire farms sequestering more CO2 from the atmosphere than they emit in that region. The input of pesticides and mineral fertiliser is reduced, while the quality and quantity of their product output are improved.

The application of semi-activated charcoal can contribute to fighting a wide range of the major environmental problems confronting our civilisation. Not only can the Greenhouse Effect be reduced, but waste management can also be optimised. The use of antibiotics, pesticides and fungicides can be minimised, while the leaking of harmful substances into groundwater can be avoided and the energy – consuming mineral fertilisers can be substituted – all that, while producing renewable energy simultaneously.