Never at the expense of safety: Airport City CEO Adir El Al has built the reputation of an investor who builds quickly and efficiently while insisting on the application of the highest quality construction, but primarily an investor who takes absolute care of the standards of safety for the people who build these facilities.
The largest greenfield investment to date, not only in Serbia but in the region as a whole, has grown to become a unique business city, built on the site of the old airport in New Belgrade.

Among new, modern and smart buildings, constructed according to ecological regulations and energy efficiency procedures, proudly stands the old hangar, which was designed by famous Serbian scientist Milutin Milanković, now reconstructed, and also a monument that recalls the time when this area was occupied by numerous taxiing aircraft.

Also serving as a reminder of that time is our “Orao” fighter jet, which is fixed in a vertical descent at the very entrance to Airport City and was leased from the Aviation Museum as part of ACB’s efforts to preserve the memory of the location and highlight the importance of the first Belgrade airport.

Airport City will represent a total investment, when the final, fifth phase is completed, of around 200 million euros, and will comprise a total of 186 thousand square metres. The fourth phase of construction is now underway and will add about 50,000 square metres to the 100,000 that is already in use.

The existing buildings named after flowers, which, as noted, comprise 100,000 square metres of office space, are fully leased to some of the hundred international and domestic companies that have settled here. Investors AFI Europe and Tidhar are particularly proud of the steady growth and development of ACB as a brand in Serbia. These investor companies are renowned international Israeli companies that operate in our region, but also worldwide. 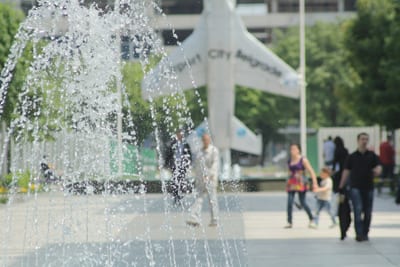 This business venue places an emphasis on comfort, while space has the ability to be adapted to meet the specific needs of each client, with exceptional functionality, all of which combines to form the most efficient environment for modern business operations.

However, in the context of the contemporary green approach to business, ACB is known primarily for the fact that all buildings are constructed according to the high-quality standards in construction and other materials that exist elsewhere in the world, and according to the latest technology and working methods, which enable high energy savings.

Modern construction technology, coupled with stringent procedures and knowhow, have allowed the ACB management to construct the complex much quicker than the average for construction in our country, while simultaneously providing absolute security for subcontractors during construction and, later, for users of this space. Thanks to this approach and adopted procedures related to workplace safety, no incidents occurred on construction sites or later in the buildings that use the infrastructure of Airport City.

Every centimetre of this complex was built from the highest quality materials, while the investors paid special attention to energy efficiency and energy savings. Thanks to the special sensor systems installed in all buildings, annual energy savings are greater than 30 per cent compared to buildings that do not use these procedures and standards.

In other words, companies that operate in the business zone of this complex do not feel increases in energy prices. Built-in sensors respond at any given moment if there is an increase or decrease in the optimally determined temperature. And this is very important because at the unique Airport City around 7,000 mainly young and educated people work, many of whom will say that working here makes them feel like they work in London or New York. In that sense, the buildings of this business park can be considered smart buildings.

Taking special care of Airport City, and the construction which is underway, is the team led by CEO Adir El Al, who does not hide his pride at the fact that, thanks to this business park, the investors confirmed their prestigious reputation and that they don’t only build quickly and insist on the application of the highest quality construction, but rather, above all, they take care of the safety standards for the people who build, maintain and work in these facilities.

These companies construct buildings in Belgrade in the same modern way they build elsewhere in the world. Thus, they primarily respect the safety of people, environmental standards, the energy efficiency policies of each building, both at ACB and in the city centre, on the site of the Central Garden residential complex, which is also a project of AFI Europe. 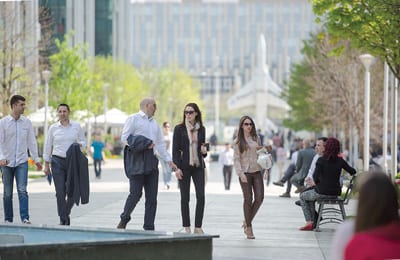 At the start of the construction of Airport City, in 2006, i.e. five years before there was applicable legislation and associated obligations for investors, here the concept of protection via the position of the first coordinator was introduced. Respecting and introducing certain standards before others, and before they were required by law, demonstrates an awareness of the need to apply the same high standards wherever the investor works.

Likewise, this kind of conduct and the personal example of the investors influence the environment and inspire the competition to do the same. Regulations under Article 19 of the Law on Health and Safety in the Workplace came into force in 2011. However, all contractors at Airport City note that here there is a principle of safety first, and only then working dynamics. Such an approach – in which the investors first demand the highest safety standards of themselves, and then of all others – shows a high degree of professional ethics.

Among new, modern and smart buildings, constructed according to ecological regulations and energy efficiency procedures, proudly stands the old hangar, which was designed by famous Serbian scientist Milutin Milanković

The same principle applies when selecting building materials. Every company that collaborates with ACB and provides materials for installation in ACB’s buildings, as well as their suppliers, must comply with the strictest environmental rules and procedures in order to do any work in this business park.

On the other hand, the consistent implementation of high standards in the protection of each individual means the investor raises levels generally in this area, which is extremely important for Serbia, and we believe it is important to verify the contributions of those who are leading the way in this area, like Airport City, headed by its CEO Adir El Al. Airport City’s investors, AFI Europe and Tidhar, foster positive corporate values, but their implementation in international projects, such as projects in Serbia, primarily depends on the engagement of management on the ground. 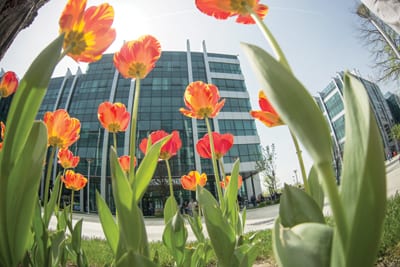 What is certainly specific, and distinguishes Airport City from similar business oases, is certainly the so-called “City within a city” concept, which – after ten years of its existence – shows its full superiority, explains ACB Communications Advisor Marina Deleon.

Our interlocutor also reveals that during the past ten years the Airport City business park has become a space that is always present in many other aspects, at the forefront of CSR projects, raising awareness of the wider community regarding issues of common interest, such as ecology, recycling, energy efficiency etc.

In addition to the humane green environment that is carefully nurtured at the Airport City, the park’s central Avenue stands out as the place where daily life unfolds and where the tenants gather. All of this, together with the unique composition of the tenants of this business oasis, has created a place with a special atmosphere: an environment of successful people who share similar standards, business practices and the organisational needs of their environment.

Many companies are eagerly awaiting the completion of the buildings comprising the fourth phase of construction, in order for them to be able to seek larger or additional office space so they can continue their operations at ACB. A large number of them express their interest in future office space even during construction.

With the construction of the last, 31st floor, Belgrade’s Skyline AFI Tower has reached its full height. Works are now underway on the stage...
Read more

Outdoor business gatherings are slowly, but cautiously, returning to our lives, accompanied by an obvious desire for the former normality to return to our...
Read more

In the first panel on 6th Serbian Property & Infrastructure Development Conference participants shared their experiences as investors and talked about the future of...
Read more