Boban Janković, President Of The Municipality Of Mionica

Our plans are serious and ambitious and in order to realise them we need to overcome all of the problems we encounter. I would single out unemployment and utility and transport infrastructure as the biggest problems – says Boban Janković, President of the Municipality of Mionica

Mionica is a municipality with a small population that is mainly engaged in fruit growing and cattle and poultry farming.

The locals produce 120 million eggs or 8,600 eggs per capita annually, which makes Mionica one of the world’s most successful municipalities in this respect.

– Exactly one year after my appointment as municipal president, the situation today is much better than it was. When I came into office, the municipality was deeply indebted, we had bailiffs knocking on our door every day and our local income was almost nonexistent.

Today, however, we regularly meet our financial obligations and have continuity in collecting municipal claims. Thanks to the persistence and determination of the team working with me, and the support we have received from the Serbian Government, we have managed to achieve our goals.

We are a municipality with a small population that is mostly engaged in agriculture and tourism and, thanks to our rich natural resources, we are one of the Serbian municipalities with the brightest future, and that’s where we see our chance for development. We can only utilise all of the municipality’s resources and potential if we have powerful large-scale processing capacities here. Hence, our number one task is to attract potential investors and build proper infrastructure.

The Mionica area is known for agriculture. Which branches have the greatest development potential and how does the municipality stimulate this potential?

– Fruit growing and cattle and poultry farming have the greatest development potential in the municipality of Mionica, due to this area’s natural resources. In 2016, the municipality allocated substantial funds to boost these agricultural branches. Apart from this, we also offer advice and professional help to both potential manufacturers and small farms.

Mionica produces 120 million eggs, or 8,600 eggs per capita, annually, making it one of the most successful municipalities in the world in this respect. We also raise 1.2 million white broilers annually. We are focused mostly on primary production, which also has huge investment potential for investors from the processing industry.

Our capacity is over 15,000 head of cattle. We produce a lot of milk and exceptionally high-quality dairy products, around 30 million litres annually. Fruit growing is definitely the segment with the highest potential and we export our raspberries and strawberries to the EU.

Fruit growing and cattle and poultry farming have the greatest development potential in the municipality of Mionica, due to this area’s natural resources

Tourism is also one of the economic branches that could contribute significantly to Mionica’s development. You have the Vrujci Spa, with Mišić’s Days as one of the more popular events. What should be done to attract more tourists to this area?

– We have been celebrating Mišić’s Days, in honour of Duke Živojin Mišić, since 1997, and this is one of the most important events held in the municipality and in Serbia. Each July, as part of this cultural, historical and tourist event, a number of artists, figures from the cultural scene and scientists gather in Struganik, the birthplace of Duke Živojin Mišić. This event includes many exhibitions, culture evenings, children’s and adult plays, performances of folk dance groups from all over the world and sporting competitions. 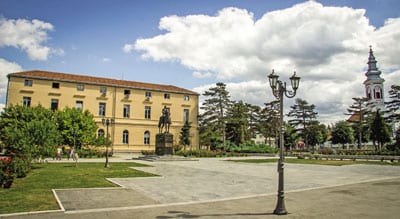 The Vrujci Spa tourist resort has the highest tourism potential in the Kolubara District. It has many natural and tourist resources, including a favourable geographical location, thermal mineral water wells with healing properties and a capacity of over 200 litres per second, making this spa the number one in Serbia, radioactive mud with medicinal properties, a good microclimate and diverse plant and animal species.

All of the aforementioned potentials are not utilised fully, which hinders the development of the Vrujci Spa. What we need to do now is to attract know-how, investments and capital (you can read more about investments on the municipality’s website www.mionica.rs ).

Natural and tourist resources can be used to develop various kinds of tourism and we are currently drafting the Development Strategy for Tourism in Mionica, which stipulates that tourism should be stimulated in order for it to have a more dynamic role in the municipality’s economic development.

By the way, Mionica has the best thermal mineral water in the area and there are three water bottling companies operating here.

How many companies currently operate in Mionica?

– There are 145 companies and 487 small businesses registered on the territory of our municipality. The predominant branches here are the food industry and the metal processing industry and, to a certain extent, construction, the services sector and tourism.

Which industries in Mionica are suitable for investment?

– The most wanted investors would be those willing to invest in agriculture and the processing industry, tourism and hospitality, metal processing and mining. Mionica is in group four, undeveloped municipalities. The Government has devised a development programme for similar municipalities in order to develop their economies.

The ratings received by Serbia from credit rating agencies show that the country’s economic future is sustainable. Fitch, Moody’s and S&P have all given Serbia positive ratings, in light of ongoing reforms, EU accession negotiations and the opening of new chapters in those negotiations.

Diplomatic cooperation between Serbia and the world has resulted in a growing number of free trade agreements that give Serbian producers a privileged position on markets with a total of over 1.1 billion people. The municipality of Mionica has the necessary investment capacities in terms of natural and human resources and infrastructure.

What concrete steps have been taken by the local authorities in order to bring investors to Mionica? Have any investors expressed interest in opening factories in the municipality lately, as Sinalco did back in the day?

– Mionica is geared towards meeting the needs of potential investors. We provide free locations, exemptions from paying local fees and assistance in training the workforce in certain areas. We also provide investment incentives in the production and service sectors, which could engage in export.

The level of incentives depends on the investment sector, the value of the investment, company size and the number of new jobs it will create. Incentives are allocated on the basis of substantiated investment costs and the costs of gross salaries for new workers. The requirements for these incentives are for an investor to stay in the same location for at least five years after the project has been implemented (or three years if investors are SMEs) and for the number of employees to remain the same for at least five years (in the case of large companies) or three years (in the case of SMEs) after the implementation of the investment project.

Investment companies have to pay out regular salaries that are at least 20 per cent higher than Serbia’s minimum wage. Incentives are allocated following a public call and in line with the relevant regulations. The municipal authorities are currently negotiating with several investors interested in greenfield and especially brownfield investments.

How can you improve the municipality’s economy and what projects do you have in the pipeline?

– We are planning to extend the old industrial zone and install the required infrastructure there. We also want to install proper infrastructure in rural areas and construct sewage and install filters, as well as doing everything that the Vrujci Spa needs in order to expand its capacities. We additionally plan to replace asbestos pipes in the municipality’s water system.

There is also an initiative to establish a business association or club that would have a representative in the municipal authorities. By having their own local association, businesses would be able to participate actively in the process of making important decisions that are in the best interests of the municipal population. We are currently putting together the Catalogue of Resources in the Municipality of Mionica.

Considering Mionica’s existing resources, we need just a little push to become an engine of development in the Kolubara District, particularly in agriculture and tourism. I am absolutely convinced that we are going to become that one day.

Boban Janković, President of the Municipality of Mionica

Thanks to investments in infrastructure according to plans, the modernisation of devastated old industrial zones and, primarily, the opening of Miloš the Great Highway...
Read more

We Shall Make an App for Potential Investors

With a database of all available sites and buildings, investors will be able to acquaint themselves with the programmes and advantages on offer After innovation...
Read more