What Are Different Sources of Energy?

There are 10 main different sources of energy that are used in the world to generate power. While there are other sources being discovered all the time, none of them has reached the stage where they can be used to provide the power to help modern life go

Solar power harvests the energy of the sun through using collector panels to create conditions that can then be turned into a kind of power. Large solar panel fields are often used in desert to gather enough power to charge small substations, and many homes use solar systems to provide for hot water, cooling and supplement their electricity. The issue with solar is that while there is plentiful amounts of sun available, only certain geographical ranges of the world get enough of the direct power of the sun for long enough to generate usable power from this source.

Wind power is becoming more and more common. The new innovations that are allowing wind farms to appear are making them a more common sight. By using large turbines to take available wind as the power to turn, the turbine can then turn a generator to produce electricity. While this seemed like an ideal solution to many, the reality of the wind farms is starting to reveal an unforeseen ecological impact that may not make it an ideal choice.

Geothermal energy is the energy that is produced from beneath the earth. It is clean, sustainable and environment friendly. High temperatures are produced continuously inside the earth’s crust by the slow delay of radioactive particles. Hot rocks present below the earth heats up the water that produces steam. The steam is then captured that helps to move turbines. The rotating turbines then power the generators. Geothermal energy can be used by a residential unit or on a large scale by a industrial application. It was used during ancient times for bathing and space heating. The biggest disadvantage with geothermal energy is that it can only be produced at selected sites throughout the world. The largest group of geothermal power plants in the world is located at The Geysers, a geothermal field in California, United States.

Hydrogen is available with water (H2O) and is most common element available on earth. Water contains two-thirds of hydrogen and can be found in combination with other elements. Once it is separated, it can be used as a fuel for generating electricity. Hydrogen is a tremendous source of energy and can be used as a source of fuel to power ships, vehicles, homes, industries and rockets. It is completely renewable, can be produced on demand and does not leave any toxic emissions in the atmosphere.

Tidal energy uses rise and fall of tides to convert kinetic energy of incoming and outgoing tides into electrical energy. The generation of energy through tidal power is mostly prevalent in coastal areas. Huge investment and limited availability of sites are few of the drawbacks of tidal energy. When there is increased height of water levels in the ocean, tides are produced which rush back and forth in the ocean. Tidal energy is one of the renewable source of energy and produce large energy even when the tides are at low speed. 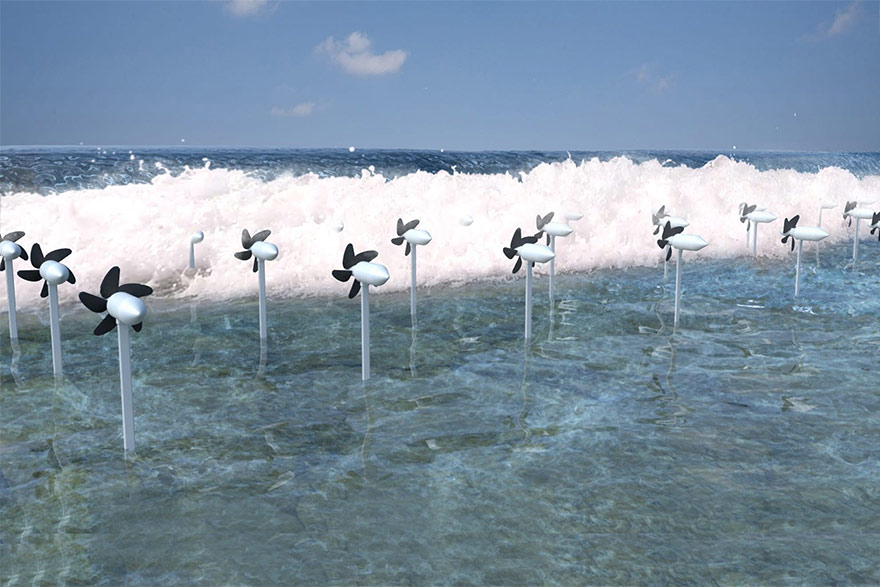 Wave energy is produced from the waves that are produced in the oceans. Wave energy is renewable, environment friendly and causes no harm to atmosphere. It can be harnessed along coastal regions of many countries and can help a country to reduce its dependance on foreign countries for fuel. Producing wave energy can damage marine ecosystem and can also be a source of disturbance to private and commercial vessels. It is highly dependent on wavelength and can also be a source of visual and noise pollution.

What many people are not aware of is that most of the cities and towns in the world rely on hydropower, and have for the past century. Every time you see a major dam, it is providing hydropower to an electrical station somewhere. The power of the water is used to turn generators to produce the electricity that is then used. The problems faced with hydropower right now have to do with the aging of the dams. Many of them need major restoration work to remain functional and safe, and that costs enormous sums of money. The drain on the world’s drinkable water supply is also causing issues as townships may wind up needing to consume the water that provides them power too.

Biomass energy is produced from organic material and is commonly used throughout the world. Chlorophyll present in plants captures the sun’s energy by converting carbon dioxide from the air and water from the ground into carbohydrates through the process of photosynthesis. When the plants are burned, the water and carbon dioxide is again released back into the atmosphere. Biomass generally include crops, plants, trees, yard clippings, wood chips and animal wastes. Biomass energy is used for heating and cooking in homes and as a fuel in industrial production. This type of energy produces large amount of carbon dioxide into the atmosphere.

While nuclear power remains a great subject of debate as to how safe it is to use, and whether or not it is really energy efficient when you take into account the waste it produces – the fact is it remains one of the major renewable sources of energy available to the world. The energy is created through a specific nuclear reaction, which is then collected and used to power generators. While almost every country has nuclear generators, there are moratoriums on their use or construction as scientists try to resolve safety and disposal issues for waste.

When most people talk about the different sources of energy they list natural gas, coal and oil as the options – these are all considered to be just one source of energy from fossil fuels. Fossil fuels provide the power for most of the world, primarily using coal and oil. Oil is converted into many products, the most used of which is gasoline. Natural gas is starting to become more common, but is used mostly for heating applications although there are more and more natural gas powered vehicles appearing on the streets. The issue with fossil fuels is twofold. To get to the fossil fuel and convert it to use there has to be a heavy destruction and pollution of the environment. The fossil fuel reserves are also limited, expecting to last only another 100 years given are basic rate of consumption.

It isn’t easy to determine which of these different sources of energy is best to use. All of them have their good and bad points. While advocates of each power type tout theirs as the best, the truth is that they are all flawed. What needs to happen is a concerted effort to change how we consume energy and to create a balance between which of these sources we draw from.

Solar panels provide the largest and cheapest source of renewable energy. But there is still room to reduce the high emissions created when building...
Read more