According to the Infrastructure Readiness Index, Serbia is ranked 75th among 139 countries on the list of the World Economic Forum. The development of networks and services impacts significantly on the growth of business and generates highly stable economic development, which is why this is one of the most important topics in the work of our ministry.

Infrastructure is the starting point for the fast development of the IT sector. What kind of infrastructure applicable to this area does our country possess; where do we stand in relation to the region and Europe, and what are the priority steps towards improving the current situation?

With the aim of developing a national broadband network, we have compiled maps, promoted wireless networks and are encouraging funds for rural development.

A Strategic Partnership Agreement on the development of a national broadband network has been signed between the Government of Serbia and Huawei. We have also launched the project “Development of ICT infrastructure in the institutions of education, science and culture”, in cooperation with the Ministry of Education, Science and Technological Development.

To what extent do budget constraints impact on the development of IT and its growth nationwide across Serbia?

– More investment is needed, particularly in infrastructure, industry and human resources capacities. Total investments in the electronic communications sector last year amounted to 32.3 billion dinars, which is 4.9% less than in the previous year. It is estimated that there is a shortfall of around 15,000 workers in the IT sector, while in contrast only 1,500 to 2,000 professionals are being educated at colleges annually.

A major shift was achieved with the introduction of informatics as a compulsory subject in primary schools. This ensures long-term increases in digital competences among new generations. However, there is no doubt that additional investments are needed in the modernisation of all levels of education.

The digital direction is also clearly defined politically. The previous and current compositions of the Government of Serbia strategically opted for the utilisation of ICT with the aim of accelerating economic and social progress. Likewise, the economy, thanks to foreign investors but also our experts, keeps pace with the global digital progress – developing and applying innovative solutions in industry and business generally. 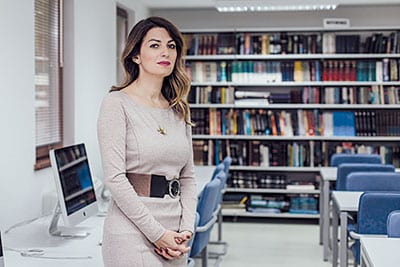 A major shift was achieved with the introduction of informatics as a compulsory subject in primary schools. This ensures long-term increases in digital competences among new generations. However, there is no doubt that additional investments are needed in the modernisation of all levels of education

You approach the safety of children on the internet very seriously. What are you doing on this issue and which projects are conducted?

– Security is the basis for successful digitisation and, among other things, also for the wide application of new services in the economy and administration. When it comes to children, ensuring their protection on the internet is a priority. They apply new technologies from their earliest childhood, but don’t have enough life experience to recognise the hazards and real consequences of behaviour on the internet.

In order to provide an institutional response to this issue, the Ministry devised the Regulation for the Safety of Children on the Internet, which formed the basis for establishing the National Contact Centre. In eight months of work, this unique advisory and educational hub for reports received more than 3,500 calls and 750 formed and processed cases.

We also raised the Pametno i bezbedno (Smart and Safe) digital platform, while our Centre’s educators, in addition to online presentations, have begun holding lectures in schools. They have so far visited more than 30 institutions in Serbia and held lectures for about 3,000 pupils and 800 parents. In the past two years, we have carried out the IT caravan campaign in all major cities. This campaign promotes the benefits of IT but also highlights the dangers present on the internet.

The higher representation of women in ICT is a global topic. Your ministry is implementing various gender equality programmes in this sector. In which ways do you support women persevering and thriving in the ICT sector?

– The Ministry of Trade, Tourism and Telecommunications have allocated funds for nine re-training projects for women in ICT, more precisely for 220 future computer programmers. This programme was launched in accordance with the Strategy for the Development of the IT Industry, where staffing shortfalls have been identified as a major problem.

The strategy’s goal is to empower women in economic and social terms and to promote their greater representation in a sector that offers numerous opportunities for rapid professional progress.

These projects have generated enormous interest, so a new cycle of retraining programmes is planned for next year, which will involve more trainees.

Moreover, the Ministry also commemorates ‘Girls in ICT Day’ every year, which is celebrated in UN member countries every fourth Thursday in April. The aim of this activity is to bring young and teenage girls closer to the field of IT, where women are not sufficiently professionally represented at present.

The world is changing rapidly, with globalisation and digitisation significantly increasing the pace of our lives and bringing us closer together than ever before, as well as presenting profound challenges to our self-perception, politics, the economy, security and society
Read more

Laying The Foundations Of A Digital Europe

"Our main task is to help our co-legislators swiftly adopt the remaining proposals to meet the objectives set in the EU’s legislative priorities, as well as the European Council's call for full DSM implementation by the end of 2018"
Read more

Enormous Potential Of ICT For Good

ICTs play a crucial role in the creation of a range of IoT solutions, which are now helping to improve the efficiency of energy use, urban mobility, water distribution, urban infrastructure operations, security and wastewater management. The ITU is working on a number of initiatives to build smart, sustainable cities
Read more

Information technology is included in education in Norway from the very beginning. It is not so much learning about it as integrating it into your daily experience as a tool, while at the same time gaining the necessary understanding of it
Read more

British Embassy support in this area, through the Good Governance Fund, will be crucial, while digital will be a key area of focus for the Western Balkans Summit, which the UK is hosting next year
Read more

Telekom Srbija is a natural partner of state institutions in the digital transformation process, as it is a simultaneously a reliable partner of the entire economy. The company primarily possesses the necessary expertise and provides very palpable services that are the very basis of the digital economy
Read more

“It is certain that Serbia will not be able to catch up with the likes of Sweden or Canada for a long time, but it is necessary for us to work on education and break the fear of new technologies"
Read more

Digitalization changes everything and it is no longer a question of following trends or not, for many businesses it is a question of survival!
Read more

Membership in the Berne Union, which gathers together almost all of the world’s largest agencies dealing with the insuring of export credits and foreign investments, will improve AOFI’s work and increase the chances of domestic companies becoming part of the international trading network
Read more

Tatjana Matić, State Secretary Of The Ministry Of Trade, Tourism And Telecommunications

Increasing use of broadband internet, which allows high-speed data transfer rates, by just 10 per cent impacts on the growth of GDP by up to 1.5%. And it is also known that GDP and employment grow in parallel
Read more

Jasmina Vignjević, President Of The Digital And E-Commerce Committee Of The Foreign Investors Council

Greater efficiency and transparency of bureaucratic procedures is achieved with the automating of processes and electronic procedures, and that is an important prerequisite for attracting new investors. The transition of administrative procedures from counter-based to electronic requests will make Serbia more attractive for investments
Read more

The members of the American Chamber of Commerce in Serbia – more than 200 U.S., international and local companies – recognise the establishing of effective e-governance as one of the most important steps for improving conditions for doing business
Read more

Public Cloud services in the IT world are no longer unknown. Our idea is to present a cloud machine to Serbia that would be found in the state’s data centre, and which would respect modern safety standards with maximised savings. Oracle is the only company currently able to offer something like that
Read more

“Although Serbia’s fiscal system is of a much better quality than many solutions in the region, there is still room for improvement, and we’re ready to help with advice and experience"
Read more

“The matter of building a cashless society is a matter of the financial inclusion and education of citizens. Even in Europe, 138 million people are financially cut off from society, i.e. without a bank account or payment methods. In Serbia there is a similar issue. According to the World bank’s latest data, 17% of citizens are financially excluded,” says Artur Turemka, Mastercard’s manager for the Balkan region
Read more

Owning a domain name gives you a free choice of where and on what terms your company's web site is hosted, and lets you exchange e-mail using an address that identifies your organisation
Read more