Networking Of Municipal Services To Continue

Over previous years, digitisation has arrived in part of Čoka’s establishments and institutions, primarily in the field of healthcare. We intend to continue the trend that has been launched in 2018, says municipal president Stana Đember

Summer 2017 brought the eZUP project to Serbia, which linked the six largest databases in Serbia – birth and death registries, MUP databases, Tax Administration, the Pension Fund, National Employment Service and the Central Registry of Compulsory Social Security. Local governments throughout Serbia are joining the system, in order to liberate citizens from having to wander from counter to counter.

The Municipality of Čoka also plans to intensify its use of digital technologies. This municipality in the North Banat District is located between the rivers Tisza, Zlatica and Moriša and extends over an area of 321 square kilometres. The dominant branches of the economy are agricultural production, the food and metal industries, primary tobacco processing and the production of products from plastic.

Via its municipal website, Čoka offers virtual registrar services, i.e. requesting birth, death and marriage certificates, as well as confirmation of citizenship. How important are these services to citizens? Do you plan to join the eZup project, so that the bodies of the administration in your municipality can exchange data ex officio? 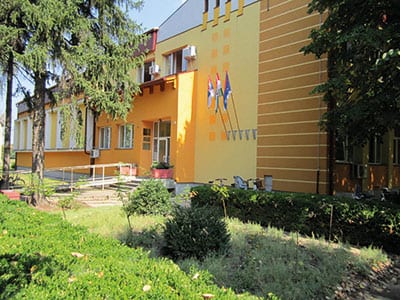 – The electronic services we offer to citizens certainly simplify the carrying out of certain obligations and enable citizens to exercise their rights faster.

There has been no noticeable growth trend in requests since the entry into force of the law which enables institutions to obtain all necessary documentation for the purposes of issuing citizens’ personal documents.

The Municipality of Čoka certainly also plans to join the eZup project, which will certainly bring progress for us.

Your municipality has done a lot in regards to digitisation in healthcare over recent years. The Health Centre has introduced its own information system, digitised Xray devices etc. What can citizens expect in 2018? Is there room for new investments, further networking with other health institutions or municipal services?

– We will continue the trend that has been launched. In 2018, the local self-government will work on the networking of healthcare institutions and all other institutions with municipal services.

We Will Revive the Economy

After a number of years spent only on reviving infrastructure and culture, the current leadership of Čoka is focused on strategically important projects, setting...
Read more

Digitalization – A Window on the World

The Sanad branch of the Čoka primary school Jovan Popović is one of 2,000 educational institutions in Serbia that joined the Digital Classroom project...
Read more

Mihailo Jovanović, Government Office For IT

The world is changing rapidly, with globalisation and digitisation significantly increasing the pace of our lives and bringing us closer together than ever before,...
Read more