Fostering eGovernment development, NALED has initiated a systematic approach with strong coordination of all stakeholders – the state, businesses and the civil sector – in implementing reforms in this area. Global experiences show that eGovernment can save up to two per cent of a country’s GDP – in Serbia, this amounts to around €600 million a year

NALED’s aim for 2018 is to finalise the work on initiated reforms, focusing on elimination of company stamps/seals, promotion of e-invoices and other electronic documents, introduction of a new system for registering seasonal workers, cadastral reform, development of electronic payments and e-archiving, as well as introduction of electronic property tax registration and electronic issuing of administrative decisions, says Jelena Bojović, Policy Director at NALED.

NALED is doing a lot to improve business procedures and enable incentives for the work of businesses. Which projects you are engaged in will help establish a more efficient public administration?

– When we consider the estimates that annual administrative costs for our businesses exceed a billion euros, this suggests that introduction and greater use of electronic services would halve the costs of businesses for obtaining and submitting paper documents, their stamping and signing and document storage.

We are working on the final abolition of company stamps, which continue to exist in 70 by-laws, even though the 2011 Company Law stipulates their elimination. Through engagement in the Government’s working group, we are working on promoting the use of e-invoices, where legal basis already exists but paper invoices remain dominant nevertheless.

Through amendments to the Law on Republic Administrative Fees, we have enabled citizens and businesses to access their information in institutions’ databases free of charge when viewed electronically, while also enabling a practice where payments for electronic procedures are made only upon issuing the requested documents.

We are part of the working group tasked with drafting the Law on Cadastral Registration, which should shorten this complicated procedure to only three days by enabling a notary to carry out the registration on citizens’ behalf via electronic communication with the cadastre. Further on, the cadastre would engage in electronic communication with tax authorities to complete tasks related to registering property taxes and transferring absolute ownership rights.

All listed activities are part of the Action Plan for the development of eGovernment, designed in cooperation with the Government of Serbia, with significant support to its development and implementation being provided by NALED’s eGovernment Alliance, which brings together 38 companies and local governments.

In your opinion, what is real eGovernment and how much will its introduction at all levels of government contribute to the efficient work of the state?

– We can see what the eGovernment represents, and how important it is, based on the example of businesses which seek to digitise its operations as soon as possible. The public administration should follow this example and use its resources in an efficient way to speed up procedures and render them cheaper and more accessible to the entire population.

An illustrious example of state administration hindering the economy is the obligation of storing all business documents in paper form. Observing only medium-sized banks in Serbia, each of them annually generates as many as 11 million paper documents that need to be archived, a retail chain spends €150,000 a year on printing and storing documents, while the state institutions’ shelves could be measured in tens of kilometres.

NALED has established several working groups that work together with businesses and the state to improve the eGovernment. What is the role and activities of these working groups?

– A major important step we have seen is the establishment of the Coordination Council for eGovernment, which was formed in November 2017 by the Government of Serbia based on our initiative, precisely due to the need to coordinate a large number of institutions. 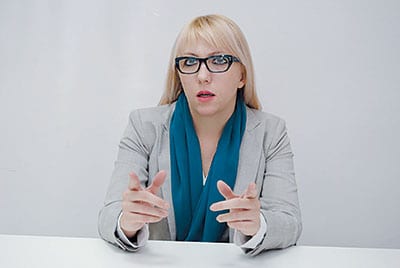 Thanks to the joint initiative of NALED member companies and the Government, in mid-December 2017 the Ministry of Finance and the Ministry of Trade issued an Explanation regarding the issuing and accounting based on electronic invoices.

A key clarification refers to the fact that it is not obligatory to print an invoice originally generated in electronic form, nor stamp a printed document in order to make it valid, i.e. an electronic invoice was confirmed to be valid in electronic form, without a signature and stamp, with no need to be printed and sent by post.

You played a major role in introducing electronic construction permitting. How specifically did you help this system come to life?

– NALED was involved in this reform from the start, or specifically, from the point of drafting the Law on Planning and Construction, which envisaged the introduction of electronic construction permits. Further on, with the support of German Development Cooperation, we ensured a €400,000 grant from the governments of Germany and Switzerland to develop the e-permitting software, and upon developing the software we submitted it to the Government of Serbia.

We are working on the final abolition of company stamps, which continue to exist in 70 by-laws, even though the 2011 Company Law stipulated their elimination

We have organized training for more than 3,000 employees in local governments, national and local public enterprises and other users of the system. Together with USAID’s Business Enabling Project, we also formed a call centre that has responded to more than 15,000 inquiries related to the e-permitting system.

The result is obvious: a procedure that is 2.5 times shorter and costs half the price, with more than 92% of requests successfully resolved, resulting in Serbia’s progress from 186th to 10th position on the World Bank’s Doing Business report in this category in just three years.

Electronic construction permits had a major impact on Serbia’s ranking in the Doing Business Report, where we reached 43rd place on the list. Is the significance of introducing and utilising eGovernment sufficiently recognised in Serbia?

– We cannot be fully satisfied, as there has been no significant progress in launching services that are often used by citizens and businesses. A project like “Baby, Welcome to the World” is an example of good service, but it is not intended for everyone. Only when we have established e-services that citizens and businesses can use on an almost daily basis will we have a greater awareness of eGovernment’s usefulness. When it comes to e-permits, we see this on the example of local government officials. After just one year, they have successfully adapted to work with electronic documents and now they cannot even imagine returning to the old system. That is the revolution we have carried out.

The years 2017 and 2018 have been declared as years of countering shadow economy. What are the impacts of eGovernment and electronic payments in reducing the shadow economy?

– Electronic services simplify the navigation through administrative procedures, and our research shows that as many as 33%of businesspeople consider complicated procedures with state institutions to be the main cause of the shadow economy. Moreover, eGovernment will be very important for improving the efficiency of inspections. The development and application of eInspector software will play a major role, networking all inspection bodies by mid-2019 and enabling them to exchange data, thus planning and coordinating their activities more efficiently.

On the micro plan, fiscalisation is one of the areas where electronic data exchange could make a major difference, where improvement of fiscal cash register system could help the Tax Administration be more efficient in controlling more than 120,000 taxpayers with just 500 inspectors. A well-developed eGovernment can also be important for countering unregistered employment, perceived as the most common form of the shadow economy, as indicated by as many as 43% of businesses.