Serbian farmers have understood what organic farming can offer in production, economic and environmental terms, and today we have various successful examples which show that the potential for organic agriculture is slowly but surely being realised

When it comes to organic production, many positive steps have been taken and today on the map of Serbia we can find various successful producers, which is a result of education, the introduction of new knowledge and a holistic approach to agricultural production.

There has been talking for years about Serbia’s great potential for the successful development of organic agriculture. How would you today assess the trends in this area of Serbian agriculture?

– The organic picture of Serbia is beautiful and shows that farmers have felt and understood what organic production is and what it can provide in production, economic and environmental terms. Of approximately 16,000 hectares, today we have large (500 to 3,000 ha) producers of legume crops and exceptional organic farms, the stand out examples of which are those that use organic production for the development of green jobs (processing, selling, composting, biogas etc.).

Small producers deal with the cultivation of fruit, vegetables, medicinal herbs, beekeeping, while the modest beginnings of organic horticulture are also noticeable. They are suppliers of green markets and supermarkets with fresh products certified as organic agriculture. All of this shows that the potential for organic agriculture is slowly but surely being realised.

In your opinion, in which direction should the process development in order for organic production to be brought within the framework of sustainable development in Serbia?

– The EU has stressed since 2010 that organic agriculture is a model of sustainable development, while development documents envisage 20 per cent of farming in the EU as being organic by 2020.

Sustainable development, particularly rural development, must be considered as being complex, which means an appropriate approach to conventional and especially organic production. The organic vision of Europe, as the document for the period up to 2030, envisages 50 per cent of cultivated land in Europe being occupied by this type of production.

Sustainable development, particularly rural development, must be considered as being complex, which means an appropriate approach to conventional and especially organic production. The organic vision of Europe, as the document for the period up to 2030, envisages 50 per cent of cultivated land in Europe being occupied by this type of production

Where do you see the state’s role in supporting the development of organic production?

– Government has a multifaceted role. It is essential to support the overall development of organic agriculture, the implementation of action plans with a guiding role and financial support related not only to control and certification but rather also as part of participation in the restoration of farms and their conversion to organic type agriculture in dominant family, small and medium-sized estates.

Apart from that, special attention should be paid to the development of fruit and vegetable growing on small estates, which is particularly interesting for the preservation of traditional gardens and small arable plots in the hilly and mountainous regions of Serbia.

Alongside that, a well-designed programme with additional investments in infrastructure could provide the starting point for the return of young people to villages.

Which obstacles do producers who choose to deal with organic products most commonly encounter? 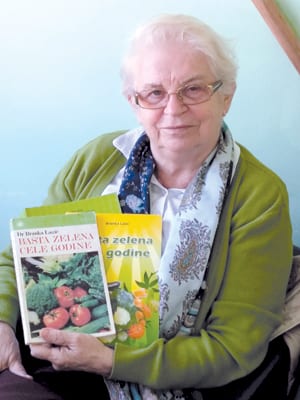 – It should be known that organic farming is not sufficiently “equipped” with essential inputs, such as organic fertilisers, seeds, machinery, and that there are significant gaps in the regulations, all of which make it difficult to start and develop organic agriculture.

Organic products must have a secured market, or production on large farms must be harmonised with the needs of consumers and processing, while it is also necessary to have sufficient supporting facilities, such as cold storage units and various processing facilities.

The biggest obstacle is certainly the lack of know-how, especially given that an increasing number of non-agricultural producers, in various occupations, are opting for organic agriculture. Every manufacturer must go through training in organic agriculture and rely, during the course of further production, on lifelong education that follows changes in production.

Organic food isn’t easy to produce and has significantly lower yields than conventional production. How could that be changed?

– First, we should dispel another misconception – reduced yields in organic farming only occur in the first or possibly the second year of the conversion period.

In addition to overcoming the aforementioned problems, it is also essential to work on recycling organic matter, or on compost production, better organisation of organic seed collection, especially when it comes to multiplying and preserving native varieties, resolving the issue of biological materials for protection…

This is all a process that is already underway, but if organic production receives its proper place in the context of Serbia’s agriculture and clear entry into the EU, production costs will fall and it will be more productive and profitable. For the development of organic production, as well as the market, a very important issue is combining the forces of organic producers, especially with small estates.

Organic farming will gain special impetus when it is treated not only as food production, but rather also as production with methods that contribute to conserving biodiversity and protecting the environment

Is legislation in this domain in Serbia harmonised with the EU or is more work on legislation needed?

– I would like to remind you that the first steps in organic (synonymous with biological, ecological) agriculture were taken in our country at the start of the year 2000. Then we gathered around the Terras association in Subotica and developed the first farms with organic production, and that is also the most intensive development of citizens’ associations with an environmental basis and an example of familiarising producers and consumers with what organic farming is and why it exists.

With harsh troubles, those of us gathered around the organic idea succeeded in pushing for adoption of the First Law (2001) on Organic Production, though without a shift in production. This also happened after the adoption of the second Law in 2006. The real development of certified organic agriculture with a regulated system followed the adoption of the new law was passed in late 2010.

All legal regulations have been harmonised with EU legislation, with the assistance of the FAO programme, the Government of Slovakia and their experts in organic agriculture. Then the first Council of organic farming was also formed. This means that it is only 2011 that can be considered as the real beginning of certified organic agriculture with membership in IFOAM. I believe that the issue of harmonisation is not an obstacle and, according to the stances of the International Organisation of Organic Producers and the EU Commission, many changes are implemented along the way. But the will must exist for all of that.

How do you see the future of organic agriculture in Serbia?

– I am an optimist, as testified by my almost 30 years working on organic agriculture.

Progress can perhaps best be felt in the shift in the consciousness of producers and consumers regarding “healthy nutrition” that has influenced organic production – about the fact that food production is not simple “peasant” work that many have fled, but rather production with broad know-how. In short, we are becoming more environmentally aware, which supports the development of organic agriculture.

Organic farming will gain special impetus when it is treated not only as food production but rather also as production with methods that contribute to conserving biodiversity and protecting the environment. Its multifunctional nature provides the opportunity to employ young people and develop green entrepreneurship and forms part of the development of the green economy. And all of that is heading one way towards economic, ecological and social development – towards a happier life, today and tomorrow.

That’s why my vote is always – YES – FOR ORGANIC PRODUCTION!

Pledge For The Future

The adoption of a new, improved and modern Law on Mining and Geological Research, as well as an entire set of new by-laws, coupled...
Read more