Seven pilot municipalities in Southeast Serbia have reorganised more than 5,000 hectares during the project implemented by GIZ

One particularly interesting aspect of German-Serbian development cooperation is the project “Strengthening of local land management in Serbia”, which is implemented by GIZ. What is the aim of this project, and how long will it last?

– The project’s goal is to improve and strengthen the management of land at national and local levels. The focus of the project in the area of rural land management lies in providing advisory services to the Ministry of Agriculture, with the directorate of agricultural land, and to municipalities, considering EU standards, especially in the field of land management policies, effective management of state-owned agricultural land and the topic of modern land consolidation.

Is this project implemented in phases and which activities have been carried out to date? What are the results of the project?

– Fragmented and inaccessible land plots in Serbia lead to inefficient agricultural production and unused land. Since 2013, this land management project has been helping the Serbian Ministry of Agriculture improve its current land management practises. During the first phase, funded by the EU, the German Government and the Serbian Ministry of Agriculture, the project contributed to the development of legal regulations concerning agricultural land and strengthening administrative structures and capacities within the respective institutions. The project also facilitated the implementation of modern land consolidation, as well as measures to reduce abandoned agricultural land. 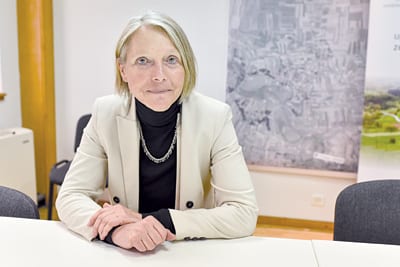 We are now in the second phase, in which – based on the experiences of the last year’s phase – we are further improving the legal framework and institutional setup. We initiate a scaling up of lessons learnt. One visible result is the use of an IT-solution for the management of state-owned agricultural land for the elaboration of the Annual Programme for the Protection, Development and Use of Agricultural Land in DAL and the municipalities. All data are stored in databases and accessible at national and local levels.

This web-based solution provides transparency and facilitates the leasing of state-owned land. The institutions involved at the national and local levels receive a clear overview while working with the same data, even now, with the process only partly scaled up, essential analysis, reporting and decision making is more efficient and transparent. The hectarage of state-owned land for leasing and income has increased.

All stakeholders at the national and local levels are still working to improve the system further. Another visible result we have is in the area of land consolidation, where we are initiating a scaling up of lessons learnt. We worked with pilot municipalities in Southeast Serbia on the modernisation of the whole process, based on German experience and with regard to EU standards. Modern land consolidation, in our opinion, is linked to three key elements:

• Comprehensive participation of all involved citizens and institutions during all steps of land consolidation;
• Absolute transparency of administrative procedures;
• Respect for the rule of law, meaning equal treatment of all stakeholders and the possibility for judicial review.

How many cities and municipalities had the opportunity to receive technical support in modernising their land management practises?

– Seven pilot municipalities in Southeast Serbia have reorganised more than 5,000 hectares. Average parcel size has increased up to fourfold, while production costs have been reduced significantly. The vast majority of landowners are very satisfied.

The land consolidation approach began with the application of current Serbian practises, which were gradually improved as required by modern sustainable mechanised agriculture and EU standards. Introduced novelties are reflected in the establishment of a board of participants to represent the interests of landowners, intensive awareness-raising campaigns, the comprehensive participation of all landowners and users, improved land valuation methods and the joint preparation of a plan of common and public facilities, including environmental impact assessments.

During the entire implementation period, a serious of meetings, workshops and training courses were organised to achieve, to the greatest possible extent, the commitment and participation of all stakeholders. Together with the Directorate for Agricultural Land, the ongoing project already started with a series of meetings in potential new municipalities to raise awareness regarding these novelties.

The main problems from the perspective of land management are fragmented parcels, a lack of infrastructure, unresolved property relations, including restitution, and a weak legal framework

Why is the consolidation of arable land essential? What are the effects of implementing land consolidation when it comes to the value of land, the competitiveness of production, resolving property rights issues etc.? What landowners and users gain direct benefit?

We had a similar experience with a female farmer, who owned 19 parcels before the land consolidation and now owns one consolidated parcel. Solving property relations during land consolidation is free of charge and supports updates to the ownership cadastre. Field roads, canals, irrigation systems and other infrastructure will be improved, providing additional value to the farmers.

Experiences from other European countries also show that investments in land consolidation have regularly high medium- and long-term returns and prosperous economic development within the region concerned.

In your opinion, what are the main problems of land management in Serbia, at both the local and national levels? How can agricultural land be more efficiently managed in Serbia?

– The main problems from the perspective of land management are fragmented parcels, a lack of infrastructure, unresolved property relations, including restitution, and a weak legal framework. Land consolidation is, from my German perspective, an instrument that could be used to re-parcel highly fragmented ownership, while it is additionally used for big infrastructure measures like flood protection or improvement of infrastructure, and should be completed by measures for village renewal and environmental protection.

The weak horizontal and vertical adjustment of Serbian legislation should be improved, based on the experiences gained in the project’s pilots, combined with experiences gained in other parts of Serbia, like Vojvodina. Under the existing legislation with the 18 paragraphs of the “Law on Agricultural Land”, it is not possible for efficient land consolidation to be carried out.

There is a need for a new legal setup, an experience we had in Germany, but also in other European countries. This requires a new definition of workflows, responsibilities and mandates, and also building capacities and changing the mind-sets of the staff performing these tasks. Finally, an integrated approach that focuses not only on planning agriculture but rather on integrating all the needs of a municipality and combining that with local knowledge and initiatives should be the future way.

Qualified workforce is one of the main prerequisites for strengthening competitiveness of the Serbian economy, as there is no strong vocational education without strong...
Read more