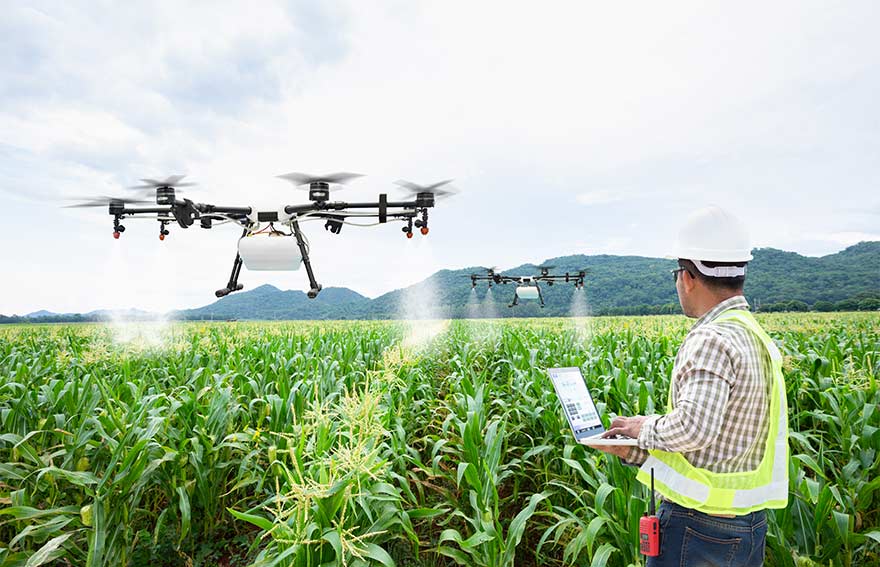 Technology can already be found everywhere on French farms, but the so-called “agritech” trend wants to push innovation even further. Two hundred fifty of France’s startups are already specialising in agriculture and working towards developing software, drones, robots, artificial intelligence and satellites

Since the time of draft horses, which were still being used in the 1960s, high-tech has been making its way into European agriculture at a rapid pace. Yet, if horses are making a big comeback for certain farming activities, such as organic viticulture, it is still at a very small scale.

“Today we have almost autonomous tractors, which hardly need drivers anymore,” said Stéphane Marcel, head of digital technology at InVivo. Guidance technologies, the use of satellites to geo-locate operations, but also smartphones, software and even drones are now an integral part of the daily lives of farmers.

In France, agronomic research, which has always been widely supported by public authorities, has now shifted towards what is known as “agri-tech”.

Does it mean producing more with less? Better and closer to the customer? At a distance but without labour? Or even sustainably? But while the keyword is innovation, the motivations leading to ‘agri-tech’ are multiple.

The association ‘Ferme Digitale’, paradoxically located in the Paris suburbs, includes 45 projects which are attempting to establish digital technology on farms. Its objectives include the development of organic fertilisers, setting up marketplaces to avoid Amazon, as well as creating decision-support software or even the participative financing platform, known as Miimosa.

In a bid to speed up the exploitation of new technologies in EU farming, a coalition of associations from the EU agri-food chain signed on 23rd April a joint EU Code of Conduct on sharing of agricultural data.

In total, nearly 250 start-ups in France are focusing on the agricultural sector. On the cooperative side, the InVivo group, which brings together 3,000 companies, is also developing a more expansive range of tech products and services.

For example, the group’s Smag software covers 10 million hectares of France’s agricultural territory. The software gives farmers access to cross-referenced information on their smartphone, including about the weather, optimum spraying dates, seeds, fertilisation plans (addition of nitrogen) and regulatory compliance.

And the consumer who buys his/her baguette every day is unaware of the tech involved, though it is so omnipresent in his diet.

“In France, it is often complicated regulatory constraints that drive the use of software, whereas elsewhere, technologies are developed to optimise productivity,” said Stéphane Marcel.

Between respecting grassed strips or watercourses, farmers must keep records that can be computerised. Software is also very present in animal husbandry, mainly because of the complexity of veterinary management

The new wave of “AgTech” is also producing more specific innovations, particularly when it comes to precision farming. This involves mapping and monitoring geological and then plant data for a field so that inputs can be adapted to suit ultra-localised needs.

The Be Api company thus proposes to map land very precisely and to propose, according to the levels of fertility and exposure within the same plot, different treatments: increasing or decreasing the number of seeds, water, nitrogen, herbicide, etc. Precision farming is thus seen as a solution to pesticides: the technology allows for the adjustment and reduction of pesticide application.

ALGORITHMS AND SATELLITES TO MONITOR WHAT IS HAPPENING IN THE FIELDS

High-tech is not only present at the developmental stage of the agricultural sector since the control of the entire Common Agricultural Policy (CAP) is also evolving thanks to the reinforcement of the algorithms. The €59 billion allocated to farmers is often subject to fraud, something the paying agencies are trying to reduce.

Aid is allocated according to specific criteria, which are also costs for the farmer, who has a potential interest in preserving certain information from the paying agency, as analysed by the OECD in its report on “Digital Opportunities in Agricultural Policies“. Satellite imagery may now offer an answer to this problem.

In partnership with the European Space Agency, two satellites, Sentinels 1 and 2, provide permanent and precise images of agricultural plots, with ultra-precise information which includes the type of crop and the exact size of the plots of land.

The technology is also able to analyse whether the land is fallow or not. The data is distributed in open source, which makes developers happy for the data-driven part of agriculture.

In terms of monitoring agricultural activity subject to the CAP, Italy, Spain and Belgium, in particular, are already using them to determine whether or not to grant area aid, which accounts for nearly 80% of the funding.

But this is an insufficient number of countries according to the European Court of Auditors, which deplores the fact that the Commission has not yet validated the methodologies of other EU member states wishing to use satellite data.

Serbia, which is among the world’s ten largest exporters of corn, is now able to sell corn on the market of China, which is the world’s largest purchaser of this product.

It was in February of this year that Minister of Agriculture, Forestry and Water Management Branislav Nedimović signed two protocols with the General Administration of Customs of China on phyto-sanitary conditions for the export of Serbian corn and dried sugar beet noodles to China.

The protocols with Minister Nedimović were co-signed on behalf of the General Administration of Customs of China by the Ambassador of that country in Belgrade, H.E. Chen Bo.

Nedimović expressed satisfaction that, following the start of exports of beef and lamb, and the resolving of issues related to the export of dairy products from Serbia to China, it was now the turn of exports of corn and beet noodles.

Ambassador Chen Bo stated that Serbia has strong agriculture and high-quality products, as well as that she considers that great opportunities and potential exist for cooperation in the field of agriculture. She stressed that the Chinese embassy is ready to work with Serbian friends and the ministry on ways to export ever more and better quality products from Serbia to China.

The Ministry of Agriculture, Forestry and Water Management has launched a project with the World Bank to allocate grants to small farmsteads and enterprises, but also for the ministry to modernise its own system for granting subsidies.

The new form of support will be paid in advance to farmers who satisfy the criteria. The maximum grant amount that one farmstead can receive is 25,000 euros, while companies will be able to count on 200,000 euros.

The Ministry will payout 20 million euros for these purposes by year’s end 2021, through three public calls. Representing an additional quality of this project is that, in addition to grants, farmsteads will also receive credit support with minimal participation.

Funds will be allocated through the format 50-40-10, i.e. beneficiaries will be able to receive grants in the amount of up to 50% of the total value of the investment, while 40% will be financed through loans from banks participating in the project, with producers providing just 10% of their own funds at the start, as their personal participation.

Among the priority grant recipients are women, young farmers and those working in less developed or impoverished municipalities. Alongside these groups, preference will also be given to those producers who have commercial potential but a capacity that is still too small to compete for financial support measures for the development of agriculture, such as IPARD.

The Competitive Agriculture in Serbia Project will run for three years and will have a total value of around 38 million dollars.

The International Agricultural Fair in Novi Sad was organised virtually for the first time in its long history in 2020, via an online platform that enabled the Novi Sad Fair to maintain the continuity of its events dedicated to agribusiness.

The fair took place from 14th to 18th December last year. With the Czech Republic as the partner country, the fair saw the presenting, in a virtual format, of the products and services of about 200 exhibitors from eight countries: Czechia, the Netherlands, Croatia, Italy, Hungary, Turkey, Spain and Serbia.

The event was officially opened by Serbian Prime Minister Ana Brnabić, who congratulated the Novi Sad Fair for persisting in the decision to maintain the continuity of its event despite the pandemic, and for organising the fair in a digital format.

As Novi Sad Fair General Director Slobodan Cvetković stated at the time, this is the first event in the Balkans to be held in a digital format and it has all the elements ordinarily included in the real fair and to which visitors are accustomed.

The COVID-19 pandemic, which the whole world has been fighting courageously for more than a year, has resulted in consequences of unprecedented proportions in...
Read more

A strong turnaround in subsidies and their manifold increase is now yielding tangible results in terms of excellent exports, opening new markets and returning...
Read more

In the previous year, despite the challenges brought by the global COVID-19 pandemic, ADAMA managed to accelerate its digital platform, launch nine new products,...
Read more

Serbia Is (Nonetheless) A Lucky Country

Serbia is a country of great natural resources that has good and well-educated farmers. That’s why, during these global crises, there are no major...
Read more

We’re Growing Together With Certis Belchim

Belchim Crop Protection is a development company that has harmonised its operations, both locally and globally, with all of the increasingly stringent environmental and...
Read more

Exceptional natural agricultural resources for both plant and animal production are not enough by themselves for a country to feed its population and export...
Read more

Obtaining a certificate for the production of organic food should be easier for small farmers from January 1st this year, thanks to the new...
Read more