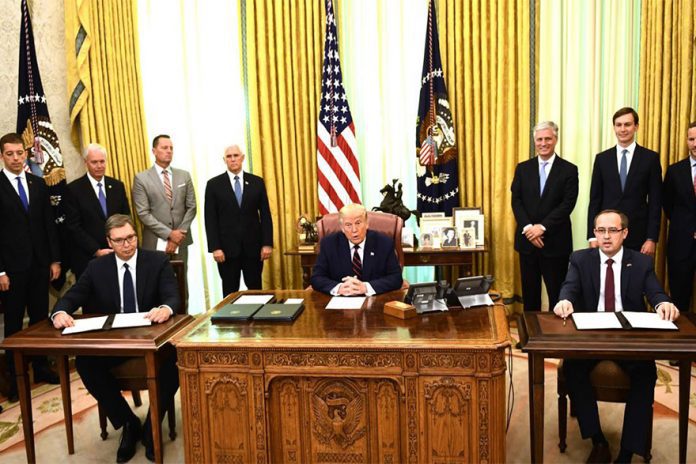 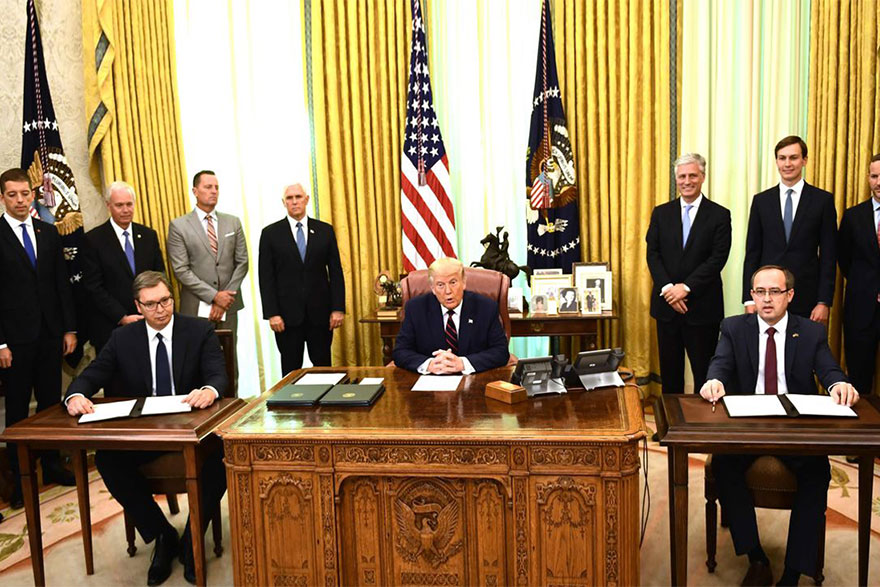 President of Serbia Aleksandar Vucic and Prime Minister of the Provisional Institutions of Kosovo Avdullah Hoti signed an Agreement on the normalisation of economic relations with President of the United States of America Donald Trump in the White House on Friday.

Addressing the press after signing the document, Vucic pointed out that there are still great differences between Belgrade and Pristina, but that the signed agreement is a huge step forward.

He explained that the Serbian delegation signed a bilateral agreement with the United States on economic cooperation with Pristina and not a trilateral one, and in it, Pristina is not mentioned as a subject of international law.

President Aleksandar Vučić of Serbia thanked President @realDonaldTrump for his commitment to stability in the region. pic.twitter.com/044e4ro3Rn

There is no point 10 in the text of the Agreement, there is no recognition of Kosovo, the President reiterated and assessed that this is a good agreement for Serbia.

Vucic emphasised that it is very important that the protection of religious buildings and the implementation of court decisions concerning the Serbian Orthodox Church have been agreed upon.

As he explained, the Americans, through bilateral agreements with Serbia and Pristina, have committed themselves to the implementation of court decisions related to the Serbian Orthodox Church and to the security of religious buildings, Serbian priests and Serbian believers.

Prime Minister Avdullah Hoti of Kosovo: “We are fully committed to work together to improve people’s lives, to make new jobs in the region … We share the same values of freedom, democracy, and open market economy.” pic.twitter.com/orN3rrGyWv

Also, the Serbian President said that the two sides agree that together with the US Department of Energy and other US government bodies, they will work on a feasibility study that should divide the energy resources of Lake Gazovode.

He added that he will travel from Washington to Brussels immediately, and reiterated that the Serbian delegation fought hard and did not do a bad job for its country.

Vucic stated that the delegation of our country, after signing the Agreement, had a long bilateral meeting with President Trump, and reiterated that it was extremely important to sign a bilateral agreement with the United States.

The signing in the Oval Room was also attended by members of the Serbian delegation – Minister of Finance Sinisa Mali, President of the Chamber of Commerce Marko Cadez and Director of the Office for Kosovo and Metohija Marko Djuric.