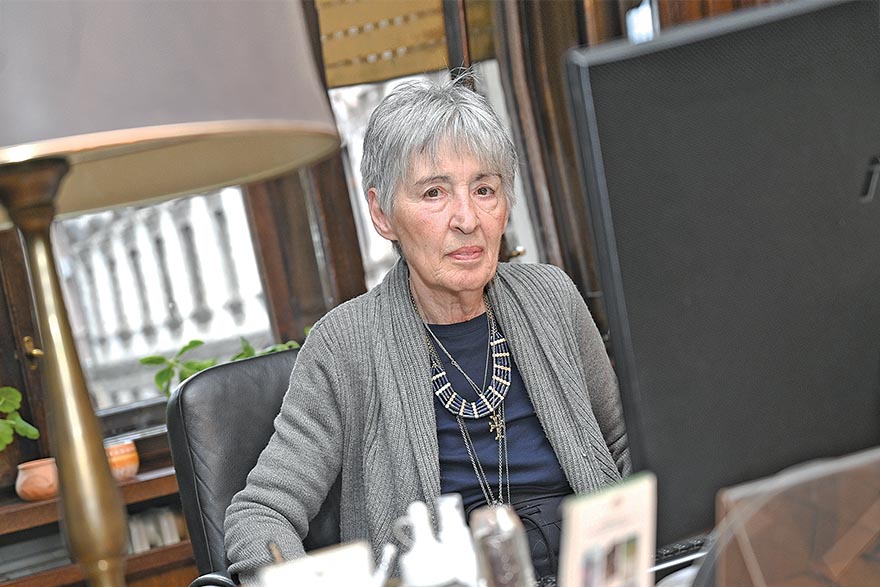 The future is uncertain and the past is still unfolding. I don’t know what’s been the most important element on the path of my life and work, and there have been many elements. What has endured since the early days is my inclination towards everything that’s valuable, beautiful and ennobles the soul… My interest in our cultural past and everything representing tradition that we mustn’t forget – and, of course, how that impacts on the future – is what led me to that which became my life credo

My interest in professorship, and at the same time in working in a gallery or museum, which emerged during my studies, thanks to the contributions of my two favourite professors, Vojislav J. Đurić and Lazar Trifunović, turned into lifelong callings.

The professorship came first, and then….
When what is now already long ago, in the 1990s, Mrs Madlena Zepter wanted to establish her own Gallery, I was already a professor of art history at the Faculty of Fine Arts who was partial to modern and contemporary art, particularly domestic art. She invited me to form a gallery, propose a programme and working mode, and for us to start working. That was during that era when it was tough to live and most people were barely existing; when life had almost ceased and the city was in “darkness”. The Zepter Gallery was a “shining light” in New Belgrade’s “darkness”. With everything created by its opening, a programme without declines and its endurance, this Gallery gained a large number of visitors – not only among experts and avid art lovers, but rather also among those just getting acquainted with modern and contemporary art.

Changing locations several times – from New Belgrade, to the centre of Belgrade, Zemun, and back to Belgrade again – this Gallery also represents the precursor to that which opened in the middle of Knez Mihailova Street on 1st July 2010 as the ZEPTER MUSEUM.

Located in the city’s historical core, in close proximity to the most important institutions of culture and education, and housed in an important architectural monument to Art Nouveau architecture that was built in 1922 according to the designs of architect Dionis Sunko, the ZEPTER MUSEUM is the first private art museum in Serbia, founded using the funding of its owner (the Zepter family).

And we were thus able to stand on a par with, unfortunately, the few museums of our nation’s capital. And they were not our competitors, nor were we theirs. The ZEPTER MUSEUM opened at a time when the city’s two most important museums – the National Museum and the Museum of Contemporary Art – were both closed for long periods due to renovation works. During that period when these two museums were closed, our museum was the only one where the public, and the many foreigners who were in Belgrade at the time, and particularly students of art colleges, could familiarise themselves with the original works of artists and the phases of fine art in Serbia during the second half of the 20th century and the beginning of the new millennium.

Art galleries, and particularly museums, have manifold roles: an enlightenment and primarily cultural mission that preserves the past and turns the future

Art galleries, and particularly museums, have manifold roles: an enlightenment and primarily cultural mission that preserves the past and turns the future. Our Museum, alongside a permanent exhibition that changes from time to time due to a lack of space, has numerous programmes of its own. We are a living organism, where various events, meetings with the public and conversations with artists take place, and where promotions of art books, thematic meetings and expert discussions are held. We cooperate with other museums and galleries, both in the country and abroad. We have a publishing section and long-term production of graphics. We are also particularly proud of the award of STOJAN ĆELIĆ, an artist, critic, theorist and academic, which we founded in 2014.

We provide an opportunity to the youngest artists, who are just embarking on their artistic journey, and those who are still completing their studies at the Faculty of Fine Arts in Belgrade.

We aren’t just a vault of the heritage that we preserve for the future, rather we also create that future.

My professorship is over. There are no more parallel streams. What remains is the ZEPTER MUSEUM that I’ve headed, together with the gallery prehistory, for almost thirty years.

How To Be Miss Universe?

I was with Zoran Đinđić in Banja Luka in February 2003 when he – in his capacity as prime minister of Serbia – paid...
Read more

We Need A New Social Contract

The unprecedented pace and scale of the changes triggered by Covid-19, as well as the technological changes, represent a challenge to the Decent Work...
Read more

The United States and NATO must seriously and realistically address substantiated demands for security guarantees from Russia, which has the right to defend itself....
Read more

Who Really Makes Decisions In Serbia?

At a juncture when the debate over whether the opposition can force the current president into a second round of voting is heating up,...
Read more

Private Interest Above Those Of The Public

The scene and content of debates in the national assembly, or the state of certain media outlets, represent an illustration of the loss of...
Read more

It is a problem that citizens would delegate these tasks to a “firm handed” leader, while the exit is actually through their greater engagement...
Read more

Srećko Đukić Ph.D., Former Serbian Ambassador And Current Member Of The Forum For International Relations Of The European Movement In Serbia

Decisions From The Top Determine Our (Un)Happy Destiny

A decision is a matter for the one at the top of the political pyramid. Maybe with others the making of decisions is preceded...
Read more

We live in a society of falsely created confusion, of anomie and apathy, lacking consensus over key values, including desirable foreign policy goals The question...
Read more

When Alex Kendall co-founded Wayve in 2017, he foresaw autonomous vehicles (AVs) with the intelligence to make their own decisions based on what they...
Read more