The members of the Serbian team are Dunja Arsenijevic, Stefan Mitrovic, Jelena Ivkovic, Filip Koldzic, Mihailo Milosevic and Branko Krnjaja, with the mentorship of Uros Stojiljkovic and Anamarija Nikoletic from the Faculty of Chemistry, the University of Belgrade.

Young Serbian chemists have won silver and three individual awards at the international tournament in Moscow. 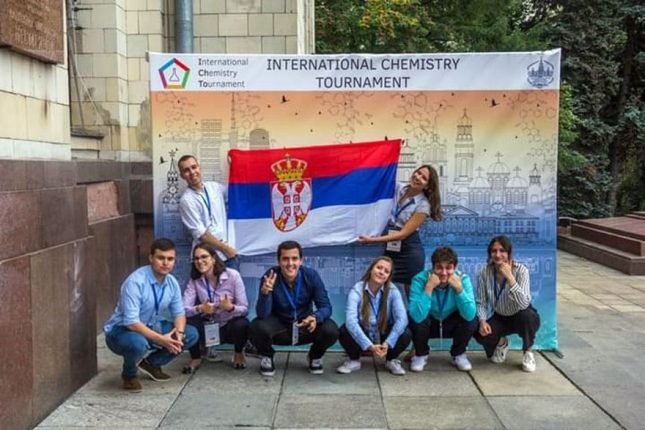 Unlike classic chemistry competitions that involve the computation of tasks, IChTo is a team competition of debatable character. Students solve problems and present their solutions to other contestants and defend them through debates. The topics of the problem cover theoretical, physical, inorganic, organic and analytical chemistry as well as materials science and materials science. The problems encourage competitors to be creative and use their knowledge beyond the scope of the subject matter learned in high school and basic chemistry studies.

1. Life with arsenic. It was necessary to devise a system that could determine sublethal concentrations of arsenic in the cell in vitro. It was imperative that the method was not toxic to the cell. Addressing this was important, given that arsenic is a well-known poison and cancer trigger. Jelena Ivkovic solved the problem by constructing a selective arsenic electrode using molecularly labelled polymers.

2. Smart packaging. It was necessary to devise a food packaging method that would change colour when food spoilage occurred and could be implemented in the current industry. The problem was solved experimentally by Dunja Arsenijevic. She designed a biodegradable foil that really changes colour when food breaks down. Also, to make the solution even better, she was able to bring in vitamin B3, which migrates into the food, preventing food spoilage.

3. Radioactive synthesis. It was necessary to devise a way to synthesize compounds that are difficult to synthesize the classical way. The problem was solved by Mihailo Milosevic. He proposed the synthesis of hexacarbonylsiborium, sodium pertechnetate, thorium (IV) -fluoride and pertriated phenyl cation.

In the individual standings, Filip Koldzic won the silver medal, and Dunja Arsenijevic and Mihailo Milosevic won the bronze medals.

In each round (the round preceding the finals) they were the best and scored the most points.

Of all the instruments in the world, violins and other string instruments are often renowned for their longevity, with the centuries-old creations of Italian luthiers, Amati...
Read more

Ambassador of China to Serbia H.E. Chen Bo, in the conversation with the President of Serbia Aleksandar Vučić, emhasized the mutual support on the...
Read more

This year, real estate turnover increased by one percent compared to 2021, and the total value of transactions in Serbia reached two billion euros,...
Read more