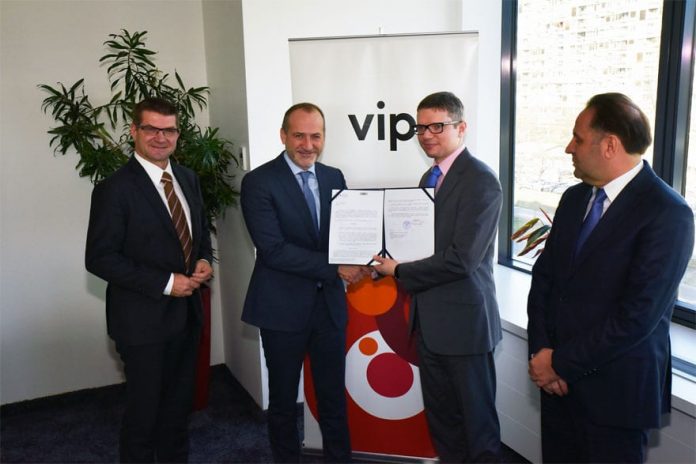 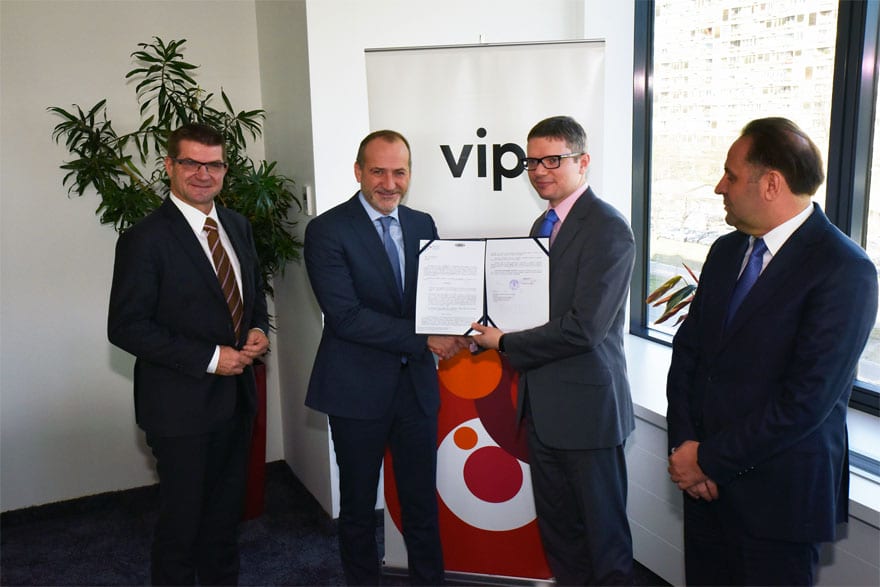 Vladica Tintor, Director of RATEL – Serbia’s regulatory agency for electronic communications and postal services – handed over to Alejandro Plater, CEO of Telekom Austria Group, and Dejan Turk, CEO of company Vip mobile, a formal decision extending all of Vip’s rights and obligations acquired through the purchase of Licence No. 3 for a public mobile telecommunication network and the provision of related services, for the next ten years.

The licence extension took place at the new headquarters of Vip mobile in New Belgrade and the event was also attended by Serbian Deputy Prime Minister and Minister of Trade, Tourism and Telecommunications, Rasim Ljajić.

“Telekom Austria Group, recognising the potential of the market, bought the license for the third mobile operator in November 2006, for which it paid 320 million and one euro. We are still the biggest greenfield investor in Serbia because we have to date invested more than 934 million euros. Vip started practically from nothing, and today it has more than 2.1 million customers and the largest 4G network in the country. The Group has confidence in Vip’s business strategy because results so far indicate that in the next ten years the company will continue to contribute to competitiveness and to raising the standards of the telecommunications market in Serbia,” said Alejandro Plater, CEO of Telekom Austria Group.

Vip mobile launched its work commercially in June 2007. As the fastest growing mobile operator in the region, and despite constant significant investments in its network and services, Vip achieved revenue in the first nine months of this year totalling 161 million euros, holding a 22.4% market share and employing more than 900 professionals.

The company rebranding planned for this year is part of the strategy of the A1 Telekom Austria Group, which Vip has been part of...
Read more

For the last 12 years, Vip mobile has been a proud member of A1 Telekom Austria Group, a leading provider of digital services and...
Read more

Company Vip has been constantly growing for the past several years, partly thanks to the fact that it operates within the A1 Telekom Austria...
Read more

Dejan Turk, CEO of Vip Mobile and A1 Slovenia

Changes are the Only Constant

Vip mobile, which is part of the international A1 Telekom Austria Group, the leading telecommunications provider in the CEE region, holds a leadership position...
Read more

We believe in the potential of this market, and our greatest contribution to Serbia's technological advancement is in encouraging digitalisation Serbia’s telecommunications market has gone...
Read more

The "Vip IoT Challenge" competition is officially open to teams that will have the opportunity to design and implement their most innovative Internet of Things (IoT) solutions using Narrowband technology, which can contribute to solving some of the key problems in everyday life in Serbia through digitization in the fields of transport, agriculture, environmental protection and wearable devices.
Read more
Cord MagazineLeaders Meeting Point