Sava Randjelović, a water polo representative and one of the promoters of UNIQA Insurance, at the invitation of this company, handed medals to the fastest runners at the 32nd Belgrade Marathon and also supported the campaign Cancer is curable.

The current Olympic and European champion joined UNIQA insurance employees and members of their families at the Race of Pleasure as this company has decided to donate one euro for each kilometre that they pass together for the acquisition of magnetic resonance for the Clinical Center of Serbia.

“The path from start to finish is the easiest to pass when it is paved with something you believe in. We have passed the five-kilometre long route without any effort today-knowing that every step we make is a step towards the acquisition of the necessary diagnostics for the Clinical Center that takes care of the biggest number of patients during the year. This time the goal was not only to pass through the winning gates at Terazije but to gather in as many numbers as possible and crowed the route with our UNIQA colours “our water polo representative said. 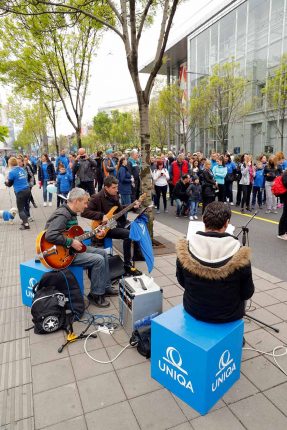 After the Race of Pleasure ended, Randjelović welcomed the fastest runners at Terazije. According to him, it was a special experience that after years of sports career for the first time he handed medals to champions who, with superhuman persistence, managed to reach the goal first.

“In sports, as in life, the greatest victories are gained by heart. The marathon is a kind of triumph of will, where, in addition to physical readiness, a great role is played by mental power. Motivation and a good rhythm are crucial on the 42 km long route. That’s why I’m thrilled with the organization and the UNIQA Music Avenue with its points in key places – so that runners get the best wind in their back when they need it – at the most critical points of the section. I am pleased to have participated in Marathon in the best possible company today, and that we all together showed that we can fight for humanity, but also to take care of our health. Sport and physical activity, which are the essence of this manifestation, are one of the most important forms of prevention and powerful weapons in the fight against diseases“, added Randjelović.

For the sixth consecutive year, UNIQA is the official insurance company at the Belgrade Marathon, as well as the organizer of the traditional Music Avenue, which had unique support this year- street musicians with trumpets, drummers and DJs. In addition to the points on the route from London to the Branko’s bridge, the music marathon was enriched with two new music stations – at the Cvetni Square and Milutin Milanković Boulevard in New Belgrade.

UNIQA Group: Profit Quadrupled In First Half Of Year – Outlook Raised For 2021 As A Whole

On 18 December 2020, the international rating agency Standard & Poor's (S&P) again confirmed its "A-" rating of UNIQA Insurance Group AG with a...
Read more

As part of its new corporate strategy "UNIQA 3.0 - Seeding the Future", UNIQA is doubling down on its efforts to reach new goals...
Read more