The European Commission and Austria are announcing...
Read more

Greece has lifted its quarantine requirement for...
Read more

Deputy Prime Minister and Minister of Construction, Transport and Infrastructure Zorana Mihajlovic attended tonight the opening of the Milos the Great highway on the section from Obrenovac to Ljig with President of the Republic Aleksandar Vucic.

After arriving at the Obrenovac ramp on the highway, where he was symbolically handed over a payment card with the number 001, Vucic said that the new highway is the pride of the whole of Serbia and that everything under construction is aimed at connecting the Serbian people. 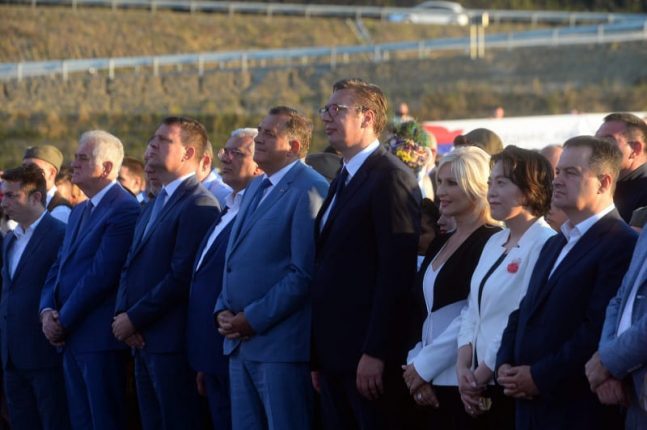 He expressed his satisfaction that Milorad Dodik from Bosnia-Herzegovina, representative of the Serbian people in Montenegro, Andrija Mandic, and Ambassador of China H.E. Bo Chen attended the opening of the highway.

The President of Serbia also announced the construction of the Sumadija highway, which will be called “Vozd Karadjordje” and will connect northern and central Sumadija.

He emphasised that the construction of the roads is only the beginning and announced that on 15 October, the eastern arm of Corridor 10 will be opened, from Nis to Dimitrovgrad, i.e., to Gradina.

They attended the presentation of the tourist potential that opens with the new highway, the tasting of national dishes and drinks from the area connected by the Milos the Great highway, and visited the Operations Centre for Traffic Management, located near Ljig.

The section of this highway from Obrenovac to Ljig is of utmost importance as it will relieve traffic on the Ibar road and significantly bring western Serbia and Belgrade closer.

The commissioning of this section, which leads to Cacak, is expected to greatly relieve traffic on the Ibar road, which would also significantly improve the safety of road users on this state road.

I believe the construction sector will prove decisive in ensuring good GDP results at the end of this year, because it's working wonderfully even...
Read more

Corridors Are Key To Reviving Passenger And Cargo Traffic

Due to the nature of investment in the railway sector, it is necessary to have patience in order to see the effects of the...
Read more

We Have Both Vision And Implementation

It is important for civilisation that we build highways, but without a developed railway network, modern ports and intermodal terminals, we won't give our...
Read more

The Spatial Plan of the Republic of Serbia represents the basic planning document for spatial planning and development in the country, with which the...
Read more

Biljana Vuksanović, Secretary Of State At The Ministry Of Construction, Transport And Infrastructure

Network Of Cooperation And Development

Reducing the costs of trade and improving the efficiency of transport in the Western Balkans, as well as the institutional, physical and operational modernisation...
Read more
Cord MagazineLeaders Meeting Point