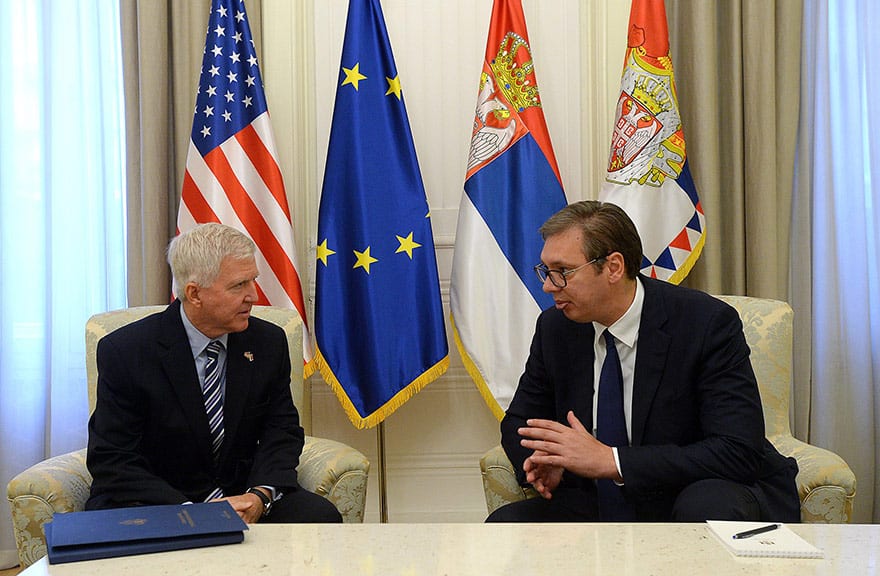 President of the Republic of Serbia Aleksandar Vučić received today in a farewell visit the Ambassador of the United States of America H.E. Kyle Scott and thanked him for his contribution to the strengthening of Serbian-American relations with his diplomatic skills.

“There is more understanding now between Serbia and the USA”, said President Vučić and added that political dialogue has been intensified and that interest of American investors in Serbian market has become more visible.

President Vučić said he hopes that it is a mutual desire for the relations between the two countries to be restored to the level of true partnership as they used to be and as they should be and that in the future we will observe more the things that connect us.

Accordingly, President Vučić thanked US Ambassador to Serbia Kyle Scott for the media campaign “You are the world” maintained by the US Embassy as the campaign revives the important moments from the joint history of the two countries – not only the alliance in the war-times but also the contribution of Serbian scientists to the development of the space programme and other successful examples of cooperation.

Ambassador Scott said that during the three and a half years of his mandate he witnessed a significant increase of American investments in Serbia, which reflects in the fact that American companies now employ over 20.000 Serbian workers. He announced his expectation of several new investments as well.

President Vučić said that he appreciates the support the USA render to Serbia on its European path, especially through the assistance in reforms in the areas of the rule of law and public administration as well as the successful military cooperation.

Ambassador Scott thanked for the support he was being given by President Vučić during his post in Belgrade. He also thanked the President for the contribution to the improvement of bilateral relations between Serbia and the USA and for his efforts aimed at the solution of various issues of vital importance for the peace and stability in the region.

The two interlocutors agreed that the appointment of a special envoy represents the drive of the USA to support the dialogue between Belgrade and Priština. Although there is no progress in the dialogue currently, President Vučić and Ambassador Scott concluded that it may be said that the interests of Serbia are now observed and that they have to be included in the possible solution which – in order to be sustainable – requires a mutual compromise, but also a gain for both Belgrade and Priština.

Ambassador Scott emphasised that neither Belgrade nor Priština gain anything from the current deadlock and that a solution would also imply greater stability in the Western Balkans. Ambassador Scott also conveyed that the USA will continue to encourage the restoration of the dialogue with a clear standpoint that the future Government in Priština must be ready to abolish the taxes on Serbian goods, while Belgrade is expected to undertake the steps towards normalisation of relations.