The war in Ukraine has disrupted supplies...
Read more

A-Class With perfectly balanced overall proportions, a loving and high-quality attention to detail in its design, the latest generation of...
Read more
25 January 2019
Facebook
Twitter
Email

The new system for registering immovable property in the Cadaster – eCounter, as well as the first results of the implementation of the Law on the Procedure for Registration in the Real Estate and Utility Lines Cadaster.

Over the first six months of work of the electronic system eCounter, citizens and businesses have submitted even 130,000 applications for Cadaster registration via public notaries. In less than half a year, the share of electronic applications has already reached 40% in the total number of procedures before the Republic Geodetic Authority.

Instead of six visits to various counters, citizens and businesses can now perform all steps for immovable property registration by only visiting a public notary, which verifies the validity of the document and electronically submits it to the Cadaster. At the same spot, the parties can also submit the tax applications which are forwarded by the RGA to Tax Administration and the local tax administration, so parties no longer need to engage in direct contact with these officers neither.

“One-stop shop electronic system eCounter is a result of teamwork including even eight institutions and organizations that work together on developing efficient e-government, good business environment and the rule of law. The eCounter for the immovable property is a win-win solution – the citizens and businesses have access to easier, more efficient and secure registration procedure, while the state has an up-to-date Cadaster serving as a mirror of a well-arranged society. The average time for resolving cases has been reduced from 25 to 5 days,” said Prime Minister Ana Brnabić at the media conference presenting the eCounter. 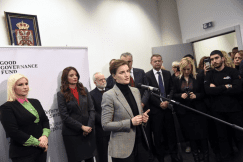 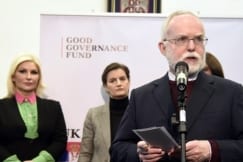 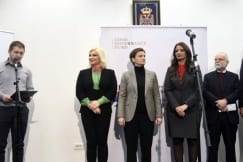 The reform of registering immovable property is supported by the UK Government’s Good Governance Fund. The legislation analysis performed within the project by NALED and PwC has indicated the need for aligning another 13 laws with the Law on Cadaster Registration Procedure. Some of the key recommendations for further improving the regulations unapređenje regulative include the elimination of the obligation to submit tax application or the reduction of data that need to be provided, transferring the obligation of paying the absolute rights transfer tax to the buyer, simplification of the procedure for changing the residential address, prohibition of selling unregistered buildings under construction.

H.E. Denis Keefe, the British Ambassador to Serbia, has stated that the UK Government is the largest donor in Serbia regarding the e-government issues, and since 2015, through its Good Governance Fund, it has supported projects worth more than 16.5 million euros. He also announced that the GGF will continue supporting the reform processes in Serbia with around six million euros.  “The work on reforming the Cadaster registration has a positive impact on improving the business environment in Serbia and the country’s ranking in the World Bank’s Doing Business report. The UK has been among the top 10 countries in this list for a long time and we wish to share our knowledge and experience with Serbia in this field“, said ambassador Keefe.

Borko Drašković, the Director of Republic Geodetic Authority, the central point of the eCounter system, stressed that in cooperation with NALED and Good Governance Fund, further training will be provided for 1,500 officers employed in the Cadaster, local governments and other organizations and institutions involved in the work of eCounter. He added that the share of public notaries performing the procedure without a single mistake has been growing month-by-month, from 27% in July to even 66% in December. The number of terminated procedures before the Cadaster has also been in continuous decline, from 1,992 in July to 650 in December, i.e. from 9.46% to 2,95%.

The embassy of China to Serbia held a reception to celebrate the 73rd anniversary of the founding of the People's Republic of China. Ambassador of...
Read more