In accordance with its strategic commitment, MK Group continues to invest in the sectors of agro, banking and tourism in Southeast Europe and plans to invest 500 million euros in these areas in the next 5 years, announced at the celebration of 35 years of business, highlighting the successful results that the company has achieved during the 3rd and a half decades of existence.

“When we founded the MK Group, we had three employees, and now this number is 7,000 people. They are all responsible for the success we have achieved, for all the opportunities and chances that have been turned into successful results,” said Miodrag Kostić, president of MK Group, adding that one of the biggest successes in the past is the fact that during all 35 years of companies remained a reliable partner.

“During 35 years of operation, our company has remained reliable support for its employees, associates, partners, but above all for 74 local communities in which it operates. Precisely thanks to this approach, one domestic company has become a regional leader in agrarian, banking and tourism, on what, you will agree, we can all be downgraded,” concluded Kostić.

Dušan Radičević, financial director of MK Group, spoke about past and future results: “In the year after us, we opened the Sheraton hotel in Novi Sad, we became the majority owner of the Portorož airport, we increased the stake in Gorenjska Banka, and now we are finalizing a strategic decision to merge our member companies MK Commerce and Agroglobe. We are very determined to consolidate the position of the leaders of Southeast Europe in the key areas of our business in the coming years. Since the founding to date, we have invested one billion euros in business, and how ambitious our plans for the future are our intention to invest an additional half a billion euros in agrar, banking and tourism in Serbia and the region in the next 5 years.” 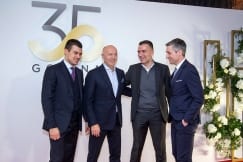 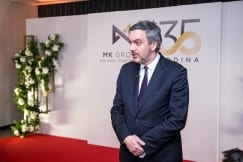 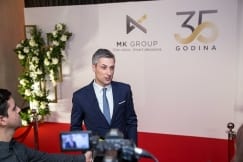 The President of the Serbian Chamber of Commerce Marko Čadež, who attended the celebration, pointed out that MK Group contributes to the growth of the Serbian economy in the best way. “MK Group is not just a company that provides monthly salaries for 7,000 employees, a job for another 200,000 people and hundreds of other companies of its partners, which in the annual budget pays 109 million euros of taxes and contributions and as the largest exporter of our agrarian sector, strongly contributes to the Serbian performance on the international market. She is also a regional leader in the areas where she operates. MK Group, with its 75 member companies, is the best proof that Serbia also has large business systems capable of competing with the strongest competition, which seriously invests both at home and abroad of our country and successful businessmen who think strategically about investments in expansion, modernization and raising business efficiency, strengthens the positions of their companies and the Serbian economy in the region and the world. ”

Miljan Ždrale, Regional Director of the EBRD for Agribusiness Sector in Central and Southeastern Europe, emphasised that MK Group is a reliable partner and contributor.
“Companies like MK Group are important drivers of economic and economic growth in the markets of the Adriatic region. Through previous cooperation, we have been convinced that the MK Group is developing thanks to the significant improvement of corporate governance, which is more than the quality of some companies that are based solely on the management of one person. On the basis of everything we have together with the management of MK Group, I am convinced that in the future they will expect even better results in the future. Of that, the favour will certainly have about 30,000 cooperators, who together with MK Group cultivate 265,000 hectares of arable land. I look forward to the new MK Group projects in the future, and I wish them a lot of luck in the work, “said Ždrale.

During the celebration of this significant jubilee, the new visual identity and values of MK Group, as well as managers of all divisions operating within the MK Group system, were officially presented.

Serbian industry is directly dependent on the European Union, which is best shown by the fact that it sells two thirds of its exports...
Read more

The President of the Chamber of Commerce and Industry of Serbia, Marko Čadež, stated today in Berlin, after a meeting at the German Ministry...
Read more

MK Group is this year celebrating the fifth anniversary of the launch of its internal campaign project Family Support, within the scope of which...
Read more