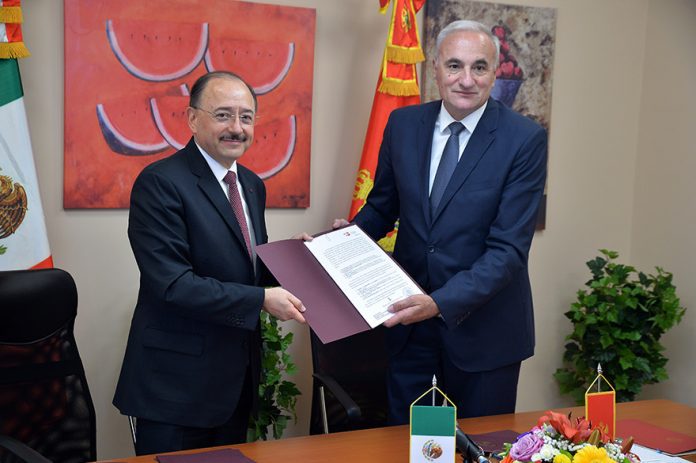 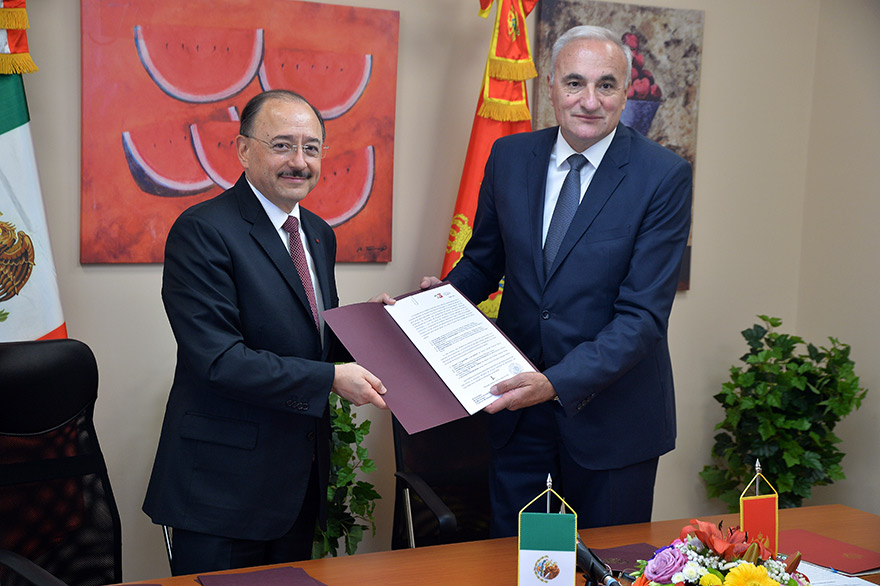 Mexico and Montenegro signed a Memorandum of Understanding on diplomatic-academic cooperation in Belgrade today.

“The memorandum is the result of good cooperation between the two ministries of foreign affairs and the interests of both countries to establish quality cooperation in the field of diplomatic and academic training and strengthen friendship and overall cooperation between our two countries,” said Montenegrin Ambassador to Serbia Tarzan Milosevic.

After signing the Memorandum at the Mexican Embassy in Belgrade, he stated that the two countries have traditionally good and friendly relations, especially on the multilateral scene, but that there is room for developing bilateral relations, especially in the fields of tourism, telecommunications, agriculture and culture.

“Mexico and Montenegro have many similarities in international politics where there is productive co-operation with mutual assistance in various initiatives,” said Mexican Ambassador to Serbia and on a non-resident basis in Bosnia and Herzegovina, Northern Macedonia and Montenegro Marco Antonio Garcia Blanco.

He pointed out that economic cooperation increased by about 42 per cent compared to 2016.

“Only in January and February this year, we traded more than in any year before, and that is very good news,” said Ambassador Blanco.

He also highlighted co-operation between the two countries during the pandemic, when Mexico organized a humanitarian flight for people from the Western Balkans, including Montenegrins, who were on a cruise ship landed in Mexico.

Mexico donated works by Mexican authors translated into Montenegrin to the National Library of Montenegro, the Faculty of Philology and the elementary school “Mexico” from Bar.

They also donated 12 flags to the elementary school from Bar “Mexico”, and the Mexican ambassador presented Milosevic with a commemorative coat of arms on the occasion of marking the 13th anniversary of the establishment of diplomatic relations.

The two countries established diplomatic relations in 2007, and since then three memoranda have been signed between the Montenegrin and Mexican Investment Promotion Agencies, a Cooperation Agreement between the Mexican Entrepreneurship Council for Foreign Trade and the Montenegrin Chamber of Commerce, and a Memorandum of Understanding for Political Dialogue.

Over the medium and long term, the focus must be on improving the economy’s resilience by addressing its internal and external imbalances and boosting...
Read more

Committed To Values And Clients

In the year 2020, which was marked by the COVID-19 pandemic, the Lovćen Group remained consistent in the implementing of its strategic goals and...
Read more

The epidemic has highlighted that Montenegro requires a more diversified economy with less reliance on tourism, while the tourism sector needs serious measures to...
Read more
Cord MagazineLeaders Meeting Point