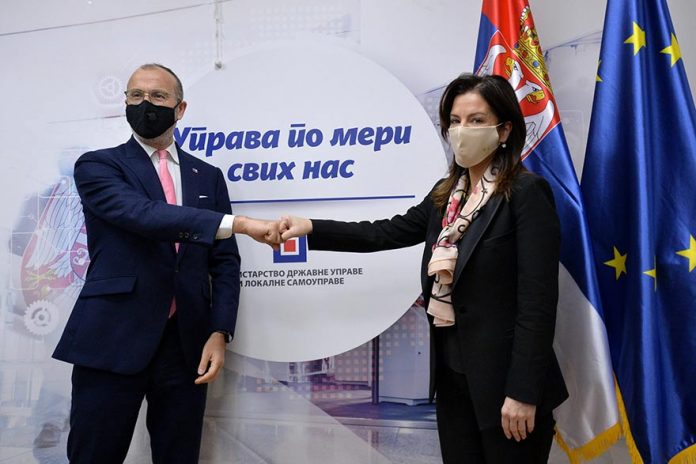 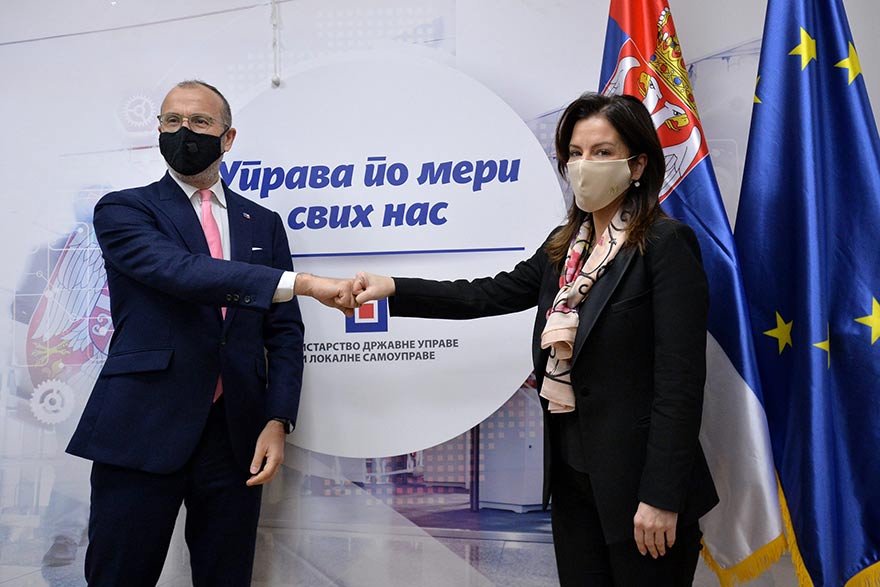 The Minister of State Administration and Local Self-Government, Marija Obradović, and the Head of the EU Delegation to Serbia, Sem Fabrizi, talked today about cooperation in the field of public administration reform in our country, as one of the priorities of Serbia’s European integration process.

The interlocutors agreed that the previous cooperation on MDULS projects, which is supported and financed by the EU, was good, as well as that there is room for its further improvement in line with recommendations of the 2020 EC report.

The Minister and the Ambassador agreed on the importance to promoting public administration reform in public and its recognisability, and the substantial funds the EU has been providing to Serbia to reform this important sector.

Minister Obradović pointed out that in this mandate she will be fully committed to accelerating the process of public administration reform, but also to the reform of the salary system, support to local self-government units, as well as the empowerment of women leaders at the local level.

Minister Obradović also announced the adoption of a whole set of laws related to the salary system, bearing in mind that their implementation was postponed for next year, due to the COVID 19 pandemic and the need to reach better solutions in order for the law to be successful. She also announced the adoption of amendments to the Law on Free Access to Information of Public Importance and the Protector of Citizens, but also active support for reforms of the local self-government sector, from the distribution of funds from the Budget Fund to the allocation of funds for establishing single administrative points in cities and municipalities.

She pointed out that during the mandate she will pay special attention to the empowerment of women leaders at the local level, bearing in mind that today in Serbia 20 cities and municipalities are led by women, 29 city and municipal assemblies are chaired by women, and 73 women are heads of public or municipal administration and called on the EU Delegation to support future projects related to their networking and empowerment.

Improvement of eGovernment was welcomed in the conversation, especially during the COVID 19 pandemic, and the expansion of the number of services that the state offers to the economy and citizens in this way.

Also, the meeting discussed the professionalisation of the state administration, resolving the issue of a large number of civil servants in the acting role, but also on the implementation of specific projects on which MDULS cooperates with the EU Delegation in Serbia.

On the occasion of the European Day for Victims of Crime marked on 22 February, the OSCE Mission to Serbia and the EU Delegation...
Read more

Rollout of fibre broadband infrastructure to help improve quality of life in countryside Rural areas in Serbia with around 90,000 households and 600 schools and...
Read more
Cord MagazineLeaders Meeting Point