"Russia will not be a credible partner, so it is economically and politically wrong to count on cooperation with...
Read more
12 October 2019
Facebook
Twitter
Email

European Union Military Committee (EUMC) Chairman Claudio Graziano completed a two-day visit to Serbia, during which he spoke with representatives of the Serbian Armed Forces and the state officials on further cooperation in the defence sector.

All Serbian state officials have shown a clear commitment to EU membership and a willingness to increase participation in the Union’s security mission, General Graziano said.

“Serbia is part of Europe and we consider it an important European country. It is a candidate for membership, and as a partner country it is already making an important contribution to our common defence and security strategy”, says General Graziano. 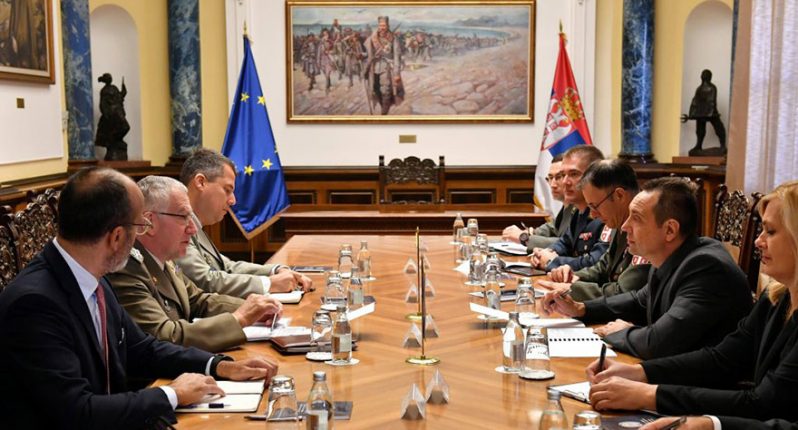 During the talks, Minister Vulin reminded that, besides maintaining territorial integrity and sovereignty and regional cooperation, the foreign policy goal of the Republic of Serbia is also membership in the European Union, pointing out the importance of the involvement of the Ministry of Defence and the Serbian Armed Forces within the EU Common Security and Defence Policy.

Emphasising the good cooperation in the field of participation in multinational operations, in particular, Minister Vulin emphasised that the Republic of Serbia is currently participating in three EU missions and one EU operation with 21 members, occasionally engaging an autonomous vessel protection detachment, thus emphasising readiness of our country to continue such engagement in the coming years, as well.

Minister Dacic emphasized that the Republic of Serbia has a high degree of cooperation with the Member States and the institutions of the European Union within the Common Security and Defense Policy, actively participates, as an EU candidate country, in the concepts of this policy, confirming its strategic commitment to EU membership. He said that while enhancing its operational capacities, the Republic of Serbia is ready for further intensification of cooperation within the framework of the Common Security and Defense Policy of the European Union in the mutual interest.

The meeting reaffirmed the Republic of Serbia’s determination to be a militarily neutral country and possibilities for further development of cooperation through existing EU Common Security and Defence Policy projects.

The EUMC was set up with a Council Decision in January 2001, and since then it has been and still is actively engaged in the evolution of European Security and Defence Policy, by providing concrete recommendations and advice on matters of military concern.

The EUMC ensures that the voice of the end-users of military capabilities is heard among the EU institutions and that it is incorporated into the decision-making process at all stages and levels of the evolution of EU’s Common Security and Defence Policy.