On the occasion of the European Day of Justice – 25 October 2020, the Council of Europe Office in Belgrade and the EU Delegation in Serbia, hosted an exchange with Judge Dragomir Milojević, Acting President of the Supreme Court of Cassation and President of the High Judicial Council (HJC) and peer-elected members of the HJC. The discussions were focused on the joint plans of the European Union and the Council of Europe, aiming at strengthening independence and efficiency of the judiciary, in co-operation and co-ordination with the highest representatives of the Serbian judicial branch.

Head of the Council of Europe Office in Belgrade Mr. Tobias Flessenkemper during his address recalled that Serbia embarked on important constitutional reforms to strengthen judicial independence and impartiality. He underlined that this work is carried forward as a matter of priority by the National Parliament and the government.

Ms Leonetta Pajer, representative of the EU Delegation to Serbia, stressed that the Rule of Law is one of the key priorities of the accession negotiations and therefore de-politicisation of the judiciary and strengthening of its independence must be kept as key objectives. As stated within the latest Progress Report she commended the courts for their “continued efforts to reduce old enforcement cases and harmonise court practice”, but also referred to the recent Report, which identified  that “the delay in the adoption of the constitutional amendments has repercussions on the adoption of related judicial legislation that is needed to increase safeguards for judicial independence.

Acting President of the Supreme Court of Cassation and President of the HJC Judge Milojević reflected that the EU report is accurate in observations on pressures on the judiciary. He stressed that the pressures have become more perfidious, coming in various forms which lately also include undue influence through social media. Milojević identified as an issue the lack of sanctions against those members of the parliament and representatives of the executive branch violating the Codes of Conduct, passed by the National Assembly and the Government. 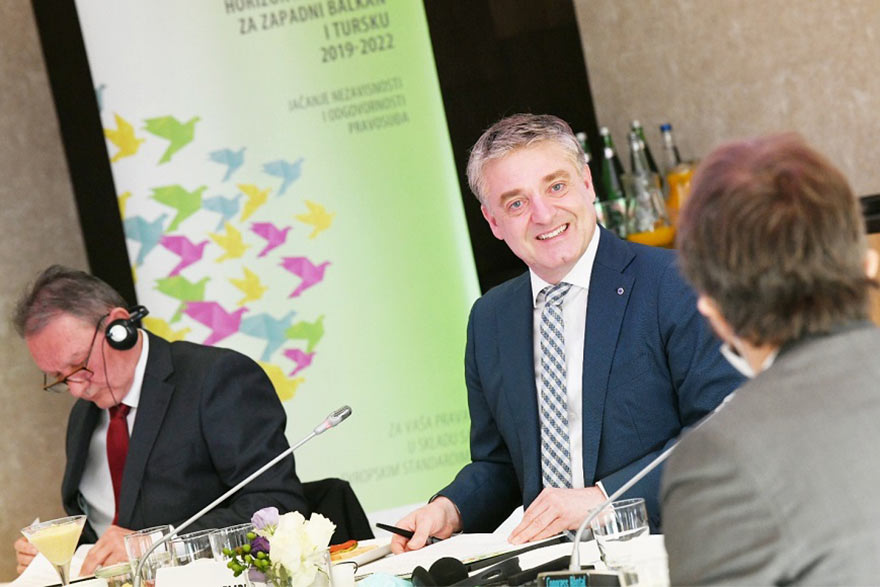 The meeting continued with the discussions and exchanges from the participants featuring a presentation of the gap analysis on preventing undue influence on individual judges and the judiciary as a whole produced by the Council of Europe consultants. A set of key recommendations was outlined to further strengthen internal mechanisms within the High Judicial Council to counter undue influence. President Milojević and peer-elected members of the HJC welcomed the recommendations aimed at enhancing their effectiveness in addressing challenges to judicial independence, and agreed to take the process further by establishing a working group to examine the findings of the expertise and find ways to incorporate the suggestions into relevant HJC bylaws.

This exchange meeting was held under the Action “Strengthening Independence and Accountability of the Judiciary” which is part of the “Horizontal Facility for the Western Balkans and Turkey II”, a co-operation initiative co-funded by the European Union and the Council of Europe, which aims at assisting beneficiaries in the Western Balkans region to comply with the Council of Europe standards and European Union acquis in the framework of the enlargement process.

In the last six years the European Union has provided support to the rule of law, judiciary reform and internal affairs in Serbia worth over EUR 163 million in total. Concerning the judiciary sector only, the EU is currently funding on-going assistance to judicial reform worth EUR13,5mil.

The first conference on preparing the Draft of the Air Protection Programme in the Republic of Serbia with accompanying Action plan was held. The programme is...
Read more

Antigypsyism is an especially persistent, violent, recurrent and commonplace form of racism. Deeper understanding and a more profound acknowledgement and recognition of the way...
Read more

Today the European Commission is proposing to create a Digital Green Certificate to facilitate safe free movement inside the EU during the COVID-19 pandemic. The Digital Green...
Read more

Denmark, Iceland and Norway have stopped administering the shot while Italy has banned the use of a batch of AstraZeneca doses as a precaution...
Read more
Cord MagazineLeaders Meeting Point