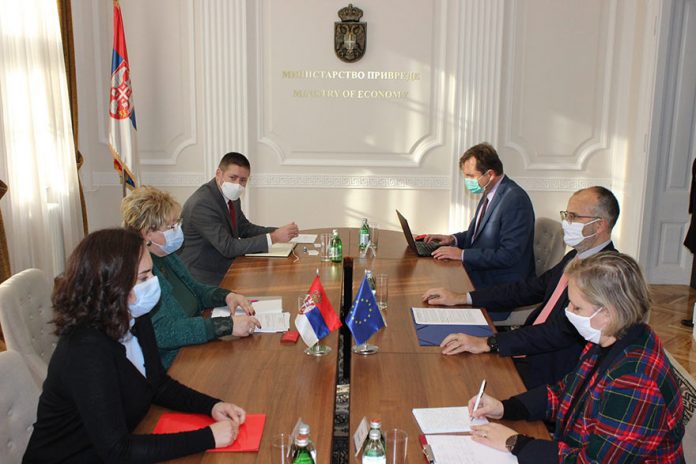 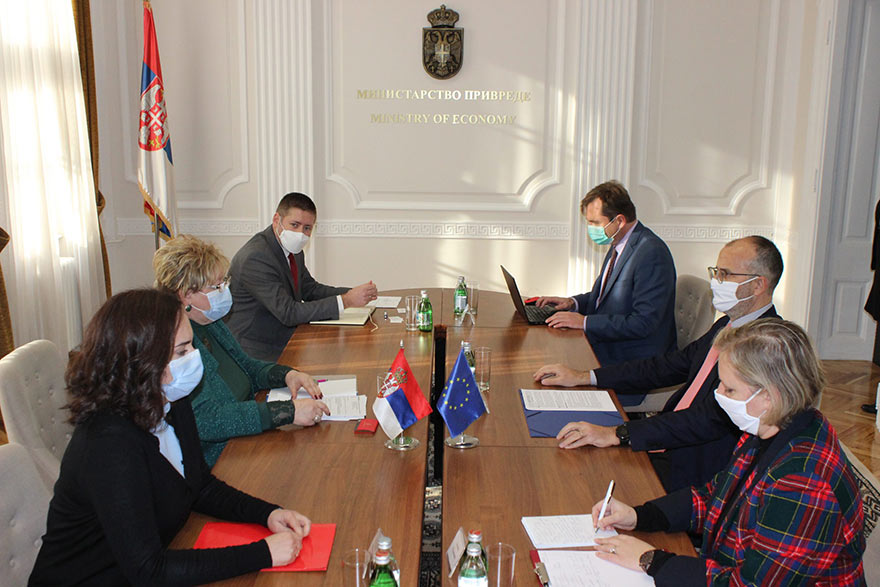 Head of the European Union, Ambassador Sem Fabrizi, met with the newly appointed Minister of Economy, Ms Andjelka Atanaskovic to discuss priorities of the Ministry and ongoing cooperation with the EU.

The Minister presented economic trends and measures taken to mitigating negative effects of the COVID-19 pandemic on economy and thanked for the significant help that the EU is providing to Serbia during the pandemic. .

She stated that the priorities of the Ministry of Economy are further improvement of business environment, increase of investments, completion of privatisation process, continuation of reforms in state ownership area as well as development of women and youth entrepreneurship. Minister pointed that these activities will give additional boost to the overall European integration process of Serbia.

‘I am pleased that the European Commission recognises important contribution that the Ministry of Economy is providing in the process of the European integrations, as identified in the last Annual Report, especially praising the improvement in economic reforms and economic chapters’, said Minister Atanaskovic.

The Ambassador congratulated the Minister for her appointment and recalled the measures taken by the EU to support Serbia’s economy to mitigate the impact of Covid, in particular in the SME sector and outlined the main element of the Economic and Investment Plan to boost long-term recovery and economic growth in the region, a green and digital transition and regional cooperation.

Ambassador Fabrizi expressed appreciation for minister Atanaskovic’s set of priorities, noting in particular the need to progress in the area of privatisation, business environment and reform of economic governance. He reiterated the readiness of the EU to continue to support the Serbian government and the Ministry in further economic growth – especially through the envisaged establishment of platform for coordination of the business environment reforms. This platform will be supported through a new EU funded project with a budget of EUR 8 million, which will also contribute to the simplification and digitalisation of Government to Business services.

The Minister of Trade, Tourism and Telecommunications Tatjana Matic and the Ambassador of the European Union Sem Fabrizi discussed today the current economic situation...
Read more

‘The EU is Serbia’s largest donor and trading partner and our IPA assistance plays an important role in supporting SMEs. Available support mechanisms include the support to Business advisory services to the private sector, as well as the provision of several financial support mechanisms for SME such as loans, equity funding, innovation funding, and loan guarantees through the Western Balkan Enterprise Development and Innovation Facility. We also plan to sign a EUR 11 million grant contract with the Development Agency of Serbia (DAS) aiming to support this sector to overcome the technological gap and upgrade equipment in order to enable more modern production, expanded capacities, creation of jobs and better competitiveness on the market. The EU funded projects will help in creating the conditions for increased growth and competitiveness of the economy’, concluded Ambassador Fabrizi.

The Minister and the Ambassador discussed also the Economic Reform Programme (ERP) and the important role of the Ministry of Economy to draft the upcoming ERP to be presented to the European Commission in January 2021.

They agreed on guidance for continuation of cooperation of Ministry of Economy and EU Delegation to Serbia on implementation of structural reforms.