COVID-19 hospitalizations are rising among people who are fully vaccinated,...
Read more

The Caribbean island has now become the world's newest republic and is inaugurating its first ever Barbadian president. Barbados removed Britain's...
Read more

The long-time CEO of Twitter will be replaced by the company's chief technology officer Parag Agrawal. In a letter,...
Read more

European Commissioner for Digital Economy and Society Mariya Gabriel visited today the Office for IT and eGovernment, recognizing the results of Serbia on the path of digital transformation.

Ms Gabriel also visite State Data Center which keeps the key information and communication infrastructure of the Republic of Serbia.

Dr Mihailo Jovanović, Director of IT and eGovernment Office and host of the visit, presented plans for the construction of a secondary State Data Center, which will be built in Kragujevac, which the Government of the Republic of Serbia proclaimed a project of strategic importance.

“The construction of the centre in Kragujevac, which will be unique in the region in terms of its capacities and performance, will contribute to the unhindered and reliable provision of electronic government services, safe data storage of citizens and the economy, as well as the placement of data not only of the state administration, but also of local self-government, potential investors.

In this way, the work of the public administration will be improved, which will speed up the procedures and simplify the daily life of citizens and the business of the economy, as well as attract new investments to the ever-growing IT sector of Serbia “, said Jovanović.

The European Commissioner praised the results achieved by Serbia in the short term in the field of digitization and public administration transformation, as well as the efficient adoption and implementation of a set of laws in these areas. 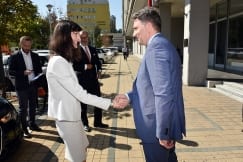 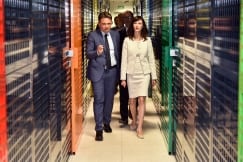 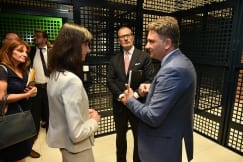 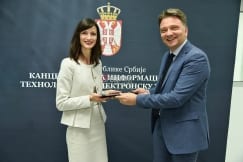 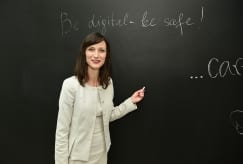 Director of IT and eGovernment Office Doc. Dr Mihailo Jovanović thanked Commissioner Marija Gabrijel and stressed that her visit is very significant, as it shows that efforts, as well as the results of Serbia, are recognized and that we are on the right path of digital transformation that we are implementing within the concept designed by Prime Minister Ana Brnabić.

“The Government of the Republic of Serbia is making great efforts in the field of digitization, in particular, the reform of public administration. The goal is for Serbia to get a better, more transparent and efficient public administration, and the means for achieving this is modern and accessible to all.

One of the first moves of the Government in this field is the establishment of the Office for IT and eGovernment, as a government service in the field of information technology and electronic administration, which responds directly to the RS government and has the power to implement serious projects that are interlinked by various state institutions,” Jovanović pointed out.

The modern electronic administration is crucial for faster and more efficient work of public administration. It reduces costs, increases the transparency of the work of the state and reduces the possibility of corruption, and makes it easier for citizens and businesses to deal with the state.

Dr Mihailo Jovanović, Director Of The Office For IT And E-government

We Have Confirmed Our Leadership In Innovation

The digital transformation in the age of Covid 19 was for many both a leap forward and a necessity for survival. For Serbia, this...
Read more

At the pavilion of the Republic of Serbia, at this year's World EXPO 2020 held in Dubai, a Memorandum of Understanding (MoU) was signed...
Read more

The Office for IT and eGovernment presented today at the State Data Centre in Kragujevac a unique platform “Smart Serbia”, which is used for...
Read more

In the past three and a half years, we have established the necessary infrastructure and developed many electronic services, transforming the public administration into...
Read more

2021 is a defining year in humanity, where government efforts towards vaccination will determine how we live our lives in the coming years. All...
Read more