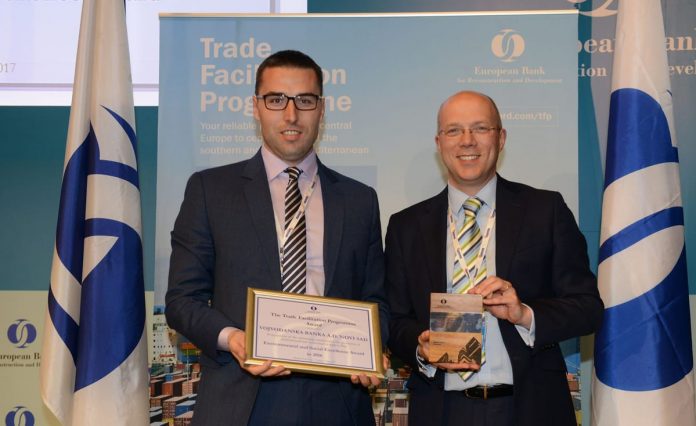 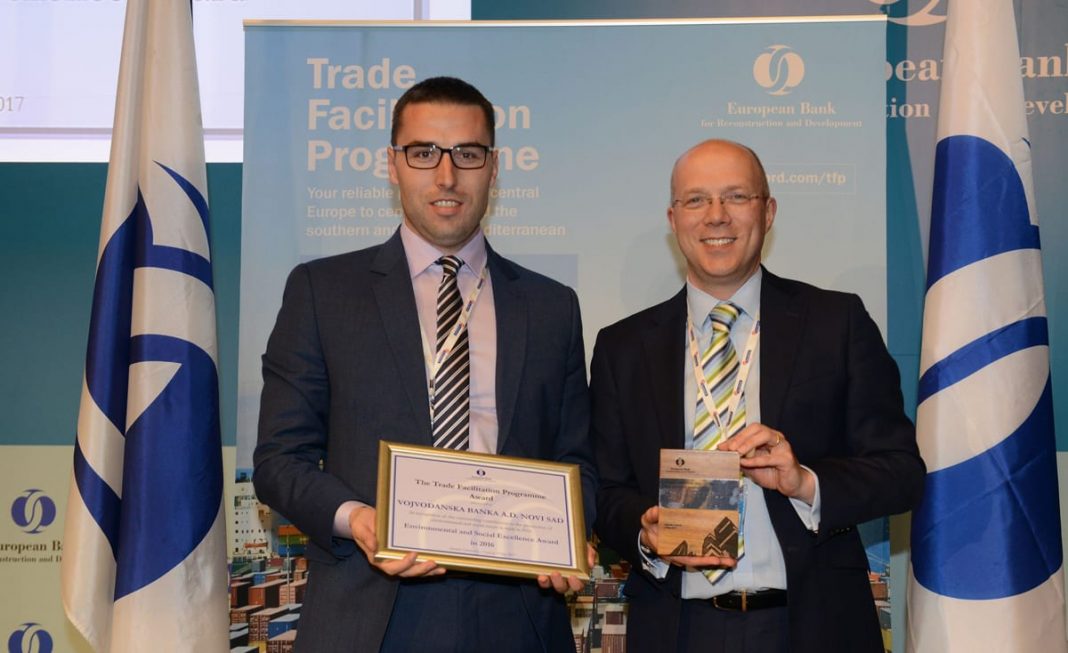 The EBRD’s Trade Facilitation Programme (TFP) has honoured Vojvođanska Banka in a ceremony at its annual TFP Awards Ceremony during the EBRD’s 2017 Annual Meeting and Business Forum in Cyprus.

Marinos Vathis, president of the Executive Board of Vojvođanska Banka received the award on behalf of the Bank at the ceremony and stated: “We are very proud to receive this award as it proves our long-term commitment to sustainability and corporate and social responsibility. We have never been focused primarily on profit and figures; our colleagues were working hard in raising awareness of the environmental and social matters in trade among our clients. I salute the initiative of my team and hope the other banks will follow our example”.

Henry Russell, EBRD Director for Financial Institutions in the Western Balkans, Belarus, Moldova and Ukraine, said: “We congratulate Vojvođanska Banka on this recognition. Not only did they – like other TFP partner banks – adopt our strict environmental and social criteria for trade-related transactions, but they have also actively promoted these standards among their own clients. This means even more importers and exporters will be aware of environmental and social issues in trade and ensure they are financing the import and export of goods and products that have a positive environment and social impact or achieved internationally recognised sustainable certification.”

The EBRD is one of the largest institutional investors in Serbia. The country has received about €4.5 billion in Bank financing to date, focused on infrastructure, but also on financial institutions, energy, industry and agribusiness, as well as other sectors, with over a half of total investment supporting private sector development.

The EBRD’s Trade Finance Programme (TFP), launched in 1999, aims to promote foreign trade to, from and among the countries in which the EBRD invests. Through the Programme, the EBRD provides guarantees to international confirming banks and short-term loans to selected banks and factoring companies for on-lending to local exporters, importers and distributors. The EBRD’s TFP currently includes 96 partner banks in 26 countries where the EBRD invests, with limits exceeding €1.5 billion in total and more than 800 confirming banks worldwide.

The integration of OTP banka Srbija and Vojvođanska banka, as a strategic move of the OTP Group, has the aim of forming a leading...
Read more

The European Bank for Reconstruction and Development (EBRD) is planning a sharp rise in financing for the Western Balkans this year and has stepped...
Read more
Cord MagazineLeaders Meeting Point