Development of Cooperation with Turkey

Prime Minister Ana Brnabić met today with Minister of the Interior of the Republic of Turkey Suleyman Soylu to discuss further improvement of the bilateral relations of the two countries, European integration, as well as the cooperation of competent institutions in the field of fight against terrorism and organised crime. 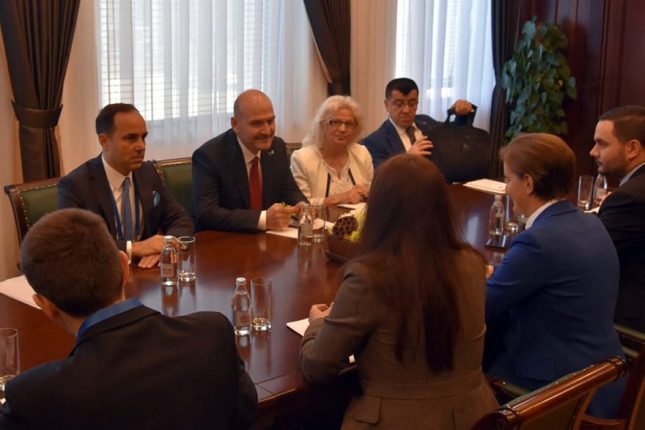 Speaking about the European integration process, Brnabić pointed out that EU membership is a strategic commitment of Serbia, and that regional cooperation is one of the main priorities of the government, where the emphasis is placed on the highest economic integration among the countries of the region.

In the presence of the Ambassador of Turkey H.E. Tanju Bilgiç, she expressed satisfaction with the good bilateral relations of the two countries and stressed that the personal, friendly relations of President Vučić and Turkish President Erdogan have also significantly contributed.

She also noted that Serbia is interested in the further continuation of political dialogue, as well as for enhancing cooperation in all areas of common interest.

The Prime Minister especially praised the cooperation between the Ministries of Interior of Serbia and Turkey in the fight against terrorism and organised crime, and positively assessed the continuation of joint cooperation in the framework of police training and information exchange, which contributes to greater security for our citizens.

Mr Soylu expressed satisfaction with the good bilateral relations between Serbia and Turkey, as well as successful cooperation in the field of the fight against terrorism and organised crime.