Mayor of Zrenjanin Čedomir Janjić and Carlsberg Serbia CEO Vladimir Vava presented a revival of one of the symbols of the city on Begej, Zrenjanin Beer.

The city of Zrenjanin and Carlsberg Serbia joined forces and achieved cooperation that will enable citizens of Zrenjanin to soon have a beer that will proudly carry a label with the name and symbols of their beloved city. 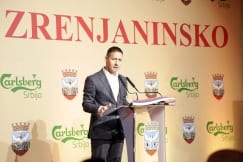 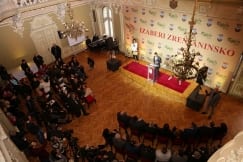 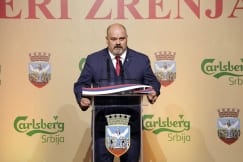 In addition to returning their favourite beer to the Zrenjanin, this cooperation aims to restore the brewery’s tradition of the city, so that two dinars from each sold bottle of new beer will be allocated for the construction of the Kraft brewery in Zrenjanin. In order for the new beer to be entirely in line with the taste of those for which it is primarily intended, all interested will have the opportunity to vote for the best of the three offered beer recipes and the most beautiful of three designs of the label, and the name and prescription from the highest number of citizens of Zrenjanin will become a new trademark of Zrenjanin beer.

There is no, I believe, no Zrenjanin who, for the meaning of our former beer and brewery Lazar Dunđerski, will not wish that at least a part of this tradition will be present in our city today. Our efforts and initiatives to achieve this have been recognised by Carlsberg, and here we are on a joint project, which we are presenting today and who, I am sure, will live on mutual satisfaction – said Mayor Čedomir Janjić.

In cooperation with the representatives of the City of Zrenjanin, we will implement a project that will have a broader social significance in the future as Carlsberg Srbija will allocate two dinars for each sold bottle to support the local community from which the brand originated. The collected funds from the sale of Zrenjanin beer will be invested in the construction of craft brewery in the territory of Zrenjanin. We firmly believe that in the next couple of years, this small brewery, besides production and new jobs, will stimulate the development of local tourism and catering industry – said the CEO of Carlsberg Serbia, Vladimir Vava.

The selection of three proposed recipes and the range of the new label of Zrenjanin Beer will be held in the period from February 1 to February 7 in front of the City Hall on Trg Slobode, and all citizens of Zrenjanin older than 18 years can take part. Zrenjanin beer will be sold in a recycled bottle of 0.5l.

Diversity Is Our Strength

With more than 40,000 employees, the Carlsberg Group represents one of the world's four largest international brewers, which unifies diverse cultures, people and brands...
Read more

The Synergy Of Diversity Yields Results

Carlsberg Srbija, as a company that operates at the global level, and as a responsible company, endeavours to develop and foresee its business plans,...
Read more

To help combat the global pandemic of the Covid-19 virus, three Carlsberg foundations have donated around $ 13.8 million (95 million Danish kroner), most...
Read more

Caring for the community in which it operates is one of the priorities of Carlsberg as a company, which is testified to by the...
Read more