One of our most important priorities is attracting strategic foreign investors for the implementation of development projects that represent the foundation of economic growth. That’s why we’re working continuously on improving the institutional framework, raising the competitiveness of our economy and developing high-quality infrastructure

What challenges is the Montenegrin economy facing today? What foundations will provide the basis for economic growth in the period ahead?

– The challenges facing our economy are not exclusive of Montenegro, rather they are the same challenges that also concern many developed countries and those that are almost identical to the problems of neighbouring countries. We all strive to attract investment, strengthen the competitiveness of the economy and increase employment. One of the key factors on this route is strategic foreign investors for the implementation of development projects that represent the foundation of economic growth.

With this goal in mind, we have already taken a series of important steps in order to continue with the policy that means extending the stimulating institutional framework. This means we have to work on improving the competitiveness of our economy, which implies continuously improving the business environment; we need to work on the development of high-quality infrastructure and in the long-term we need to emphasise the value of our natural resources through the implementation of development projects in the fields of energy, tourism, agriculture and the production/processing industries. Finally, we must work on strengthening macroeconomic stability.

The government has also launched a series of very ambitious projects in the energy field. What is the current status of these projects?

– Energy is one of the sectors in Montenegro that have really developed the most in recent years. If we start from the most important projects, that is certainly the undersea cable – forming its own kind of bridge for the transport of energy between the Western Balkans and Italy, or the European Union.

in this project to operate within the agreed deadlines. When it comes to infrastructure being built on the territory of Montenegro, if we say that the transmission line that extends throughout our territory is over 180km long, with over 650 transmission towers and over 130km of access roads, it is clear what parameters we are talking about.

This year will see power from wind farms enter the Montenegrin energy system for the first time. Small hydropower projects are being implemented according to the planned dynamics, and it is known that we have committed ourselves to monitor the implementation of signed contracts in the period ahead, as we are very close to the national target of a 33 per cent share in final consumption.

We also have an interest in large hydropower plants, especially on the River Morača. Apart from that, company Škoda Praha has presented an alternative solution for the financiers of the project for Block II at TPP Pljevlja. Along with that, CGES is planning the reconstruction of Block I with environmental remediation.

Plans also include a major project to direct water from the River Zeta to Lake Krupac, the implementation of which will increase annual production at the Perućica Hydro Plant by about 30 GWH, or, converted into financial terms, by 2.5 or as much as 3.7 million euros. A feasibility study for a hydro plant on the River Lim is also under preparation…

Some energy sector projects also prompted calls from new interested investors from Slovenia, China and Turkey. Could you divulge some more details about that?

– It is known to the public that at this point evaluations have been completed on the technical offer for an HPP on the Morača from Chinese company Norinco, which the government adopted as final. This project is also being discussed with several other interested companies from China, Turkey and Slovenia. So, the negotiation process is still ongoing, and precisely how many offers are submitted and how they are assessed will determine the dynamics and further order of steps related to the implementation of this project.

In which areas does the potential exist to further attract investors to the Montenegrin economy; which of your ministry’s measures will be aimed at encouraging investors already present to reinvest their profits?

– I would remind you that the Economy Ministry is implementing nine programmes for supporting the economy and that most programmes are based on financial support for investors, entrepreneurs, small and medium-sized enterprises, which are implemented according to the principle of subsidies, partial refunds of resources or exemptions and reductions in charges and taxes – depending on the programme itself. Apart from financial support programmes, with its technical support programmes, the Ministry wants to encourage entrepreneurs and SMEs to participate in programmes, providing them with advisory and logistical support.

With the Decree on encouraging FDI we defined financial incentives for new investments in Montenegro. On the basis of this, six investors are already successfully implementing projects subsidised by the state

Which upcoming measures of your ministry could you announce that relate to improving the business climate and attracting new investment?

– As I have stated, the Economy Ministry implements numerous financial and technical support programmes for domestic and foreign businesses. It is known that we used the Decree on encouraging FDI to define financial incentives for new investments in Montenegro. The third public call was announced in March and will last until May. On the basis of the first two public calls, six investors are already successfully implementing projects that were subsidised by the state.

With the project to develop business zones, which is also one of the Economy Ministry’s programmes, we have defined the locations that represent unique entities on the territory of local governments, partly or completely equipped in terms of infrastructure, and which provide potential investors, apart from a shared space and infrastructure, with additional tax breaks and administrative incentives at both the national and local levels. Those who are interested can find everything about this project on the website www.bizniszona.me.

With the programme of incentives for the development of clusters in Montenegro financial support has been provided for companies that combine forces in clusters, while the programme for increasing regional and local competitiveness through compliance with the requirements of international business standards has the goal of providing financial support for enterprises, particularly from less developed municipalities, to increase their competitiveness as much as possible, primarily through harmonisation with the requirements of international standards for products and support for gaining certification for assessments of compliance.

The programme for supporting the modernisation of the industry is aimed at improving the operations of businesses through investment in the technical equipping of production capacities, or investments in equipment. Each of these programmes can strengthen our economy significantly, especially when it comes to SMEs, and if entrepreneurs were to utilise all or most of them, then we are really talking about serious assistance.

The Economy Ministry conducts nine programmes for supporting the economy, including support for domestic investors, primarily in the SME sector. How effective are these programmes and how much do they contribute to GDP growth and job creation?

– The Government of Montenegro continually implements programmes that are aimed at attracting new investment, encouraging business development and increasing employment, all with a special emphasis on Montenegro’s less developed municipalities. 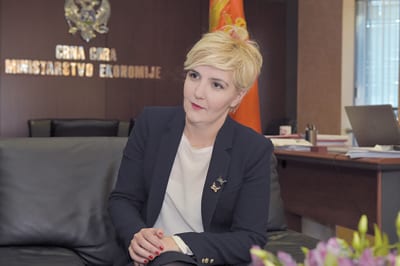 The response of companies in the previous two years is the best indicator that we are on the right track: through two public calls, we will implement six investment projects worth a total of around seven million euros, which also imply the hiring of 253 new workers.

The Decree on business zones specifies the conditions for establishing business zones, defines incentives for prospective users, establishes a distinction between local and strategic business zones, introduces new rules related to infrastructure equipment and the like.

Thus, for example, business zones users are exempt from paying contributions for compulsory social insurance on salaries, contributions to the Fund for the work and taxes on personal income for every person they employ within a business zone, and all of that for a period of five years.

I have also already mentioned the programme for encouraging the development of clusters and the programme for increasing regional and local competitiveness through compliance with the requirements of international business standards. Both of these programmes are based on the awarding of state assistance on the principle of reimbursements worth up to 70% of the value of an investment, and in 2016 the Economy Ministry in this way supported six clusters via the first programme and 30 companies via the second programme.

In Montenegro the implementation of a series of important energy projects is underway, from the undersea cable to wind farms and large hydropower plants

Will there be room to continue support for the economic development of less developed municipalities?

– It is known that the Economy Ministry has launched the Business caravan – a caravan of good business opportunities in order to tour all municipalities in our country and familiarise businessmen with all business development support programmes that are conducted by the Economy Ministry. In this project, we once again received the support of the United Nations Development Programme (UNDP), with which we are jointly implementing the project “Improving the competitiveness of the economy in Montenegro”.

The main objective of the project is to impact positively on the competitiveness of the economy and the overcoming of regional socio-economic disparities via the improving of the business environment, the activating of the SME sector, the attracting of new investors and the increase of employment rates, especially in the country’s less developed areas.

Apart from giving presentations and familiarising entrepreneurs with business development support programmes and ways in which they can improve their operations and strengthen their market position, local entrepreneurs in 23 Montenegrin municipalities will have the opportunity, in direct communication with representatives of the Economy Ministry and the Secretariat for Development Projects, to voice the problems they encounter when applying for inclusion in individual programmes or obstacles hindering their implementation.

Prior to taking on the position of economy minister, you were in charge of energy efficiency. How important as area is that on your agenda today?

– The area of energy efficiency is very important for the whole of our society from every aspect, thus from the standpoint of efficient use of energy and from the position of informing the public and raising awareness about a sustainable attitude towards energy use.

In this way, energy efficiency measures are implemented both in public buildings and in the household sector. Tens of millions of euros have been invested in reconstructing schools, hospitals, health centres, nursery schools, student dormitories, resource centres etc.

These projects now already have an established implementation schedule and method, which eases work, but this type of project certainly has an important place on the agenda of the Economy Minister.