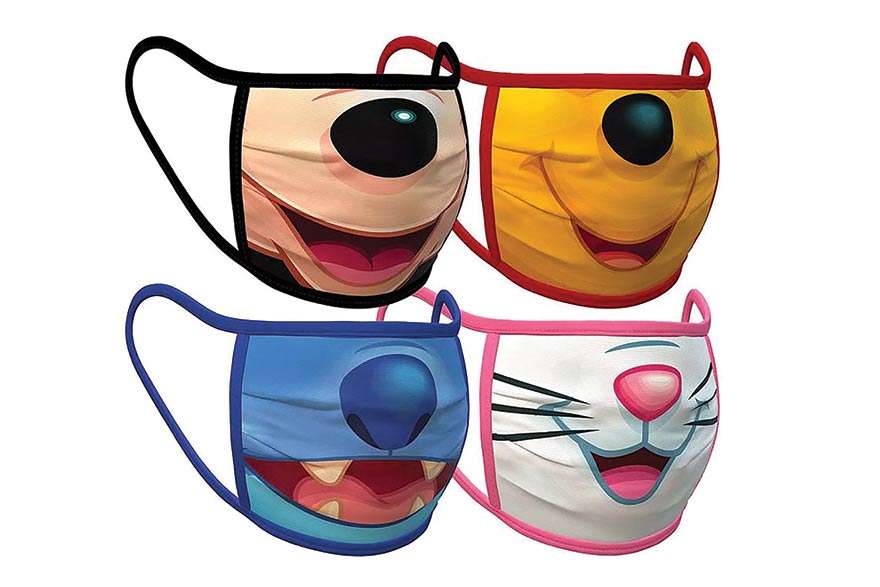 While Having To Stay At Home

Because of the coronavirus outbreak, we’re spending most of our time at home. However, not all of us are used to spending so much time cooped up in one place, and it’s starting to show!

Some people are so bored that they’re finding new and creative ways to spend their downtime. Like one person who thought it would be a brilliant idea to walk around on all fours with an Amazon box on their body. Or another who took off all the seeds from a strawberry with nothing but a pair of tweezers.

The US Centers for Disease Control And Prevention has advised people to wear cloth face masks to slow the spread of coronavirus. And while it’s a literal must-have for the spring, it doesn’t make it a fun and lovely accessory.

Luckily, Disney has just launched a cool line of reusable cloth face masks that feature fan-favourite Disney cartoons. From Baby Yoda and the Avengers to Winnie The Pooh and Mickie Mouse, the masks are aimed at kids and kids at heart who finally have a chance to let out their inner character.

People from Norway, Sweden, Finland, and other northern European countries have been setting the social-distancing trend before it was cool, and here’s the proof. 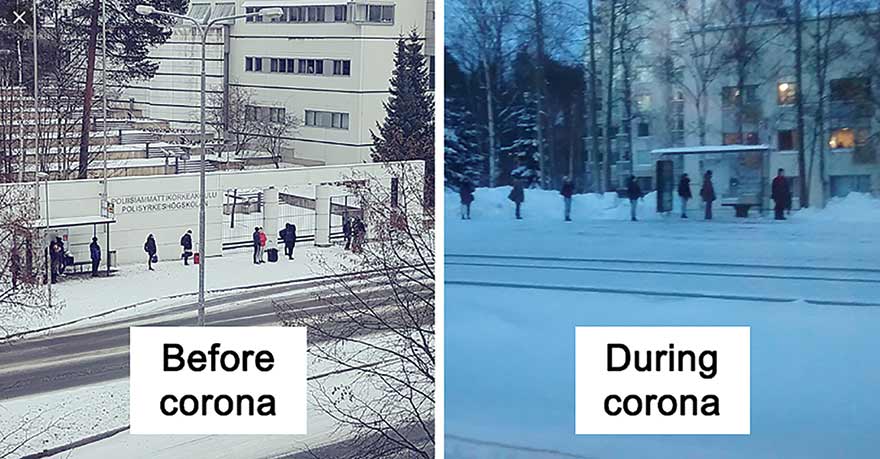 Imgur user LucasLux recently shared a couple of photos of Nordic people social distancing a few years before this became the new normal.

While some people are struggling to figure out how far away do they have to stand from each other, it turns out that Nordic people have been setting this trend for a long while now. Some of these photos shared by Imgur user LucasLux are five years old, so they were social distancing before it was cool.

Garry Stevenson owns cat Mittens. “She is mostly calm and collected, apart from when we all go to bed, then she runs about the house like a maniac,” he said. 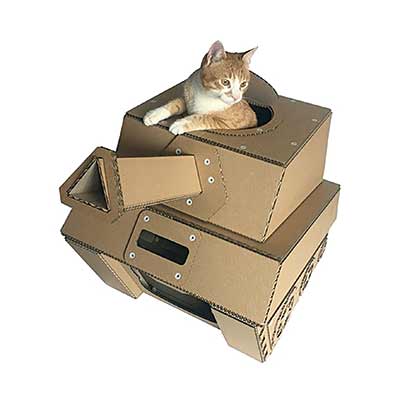 Someone in his Facebook newsfeed had shared a picture of a cat in a tank a while back. The idea had been stuck in his head for a while, and he was planning to build a tank for Mittens once he had the time. It took him around 3 hours to craft “at a leisurely pace” and Garry pointed out that his cat loves boxes and cardboard.

“I work from home anyway as a graphic designer, my wife is a carer with a Scottish charity, so it’s business as usual for us. We do have two kids around all day every day, but they’re pretty good at amusing themselves and can video chat with their friends. Overall, we can’t complain; others aren’t so lucky,” said Garry. 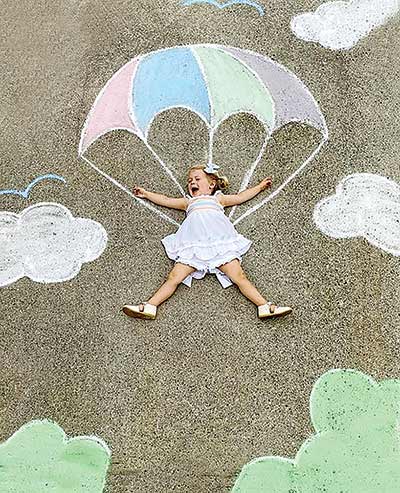 Quarantine might have trapped us inside the shells of our houses; however, some people are finding ways to escape the mundane repetition of our reality and venture out on colourful adventures. A family in Atlanta use bright chalk crayons to create wondrous settings for the family’s children to play in.

Abbey Burns Tucker started a series of photos on her Facebook page, showcasing a variety of fun and playful situations where her daughters interact with the drawings on the concrete. It’s small wonder that such colourful photographs attracted thousands of likes and hundreds of comments from people on social media. 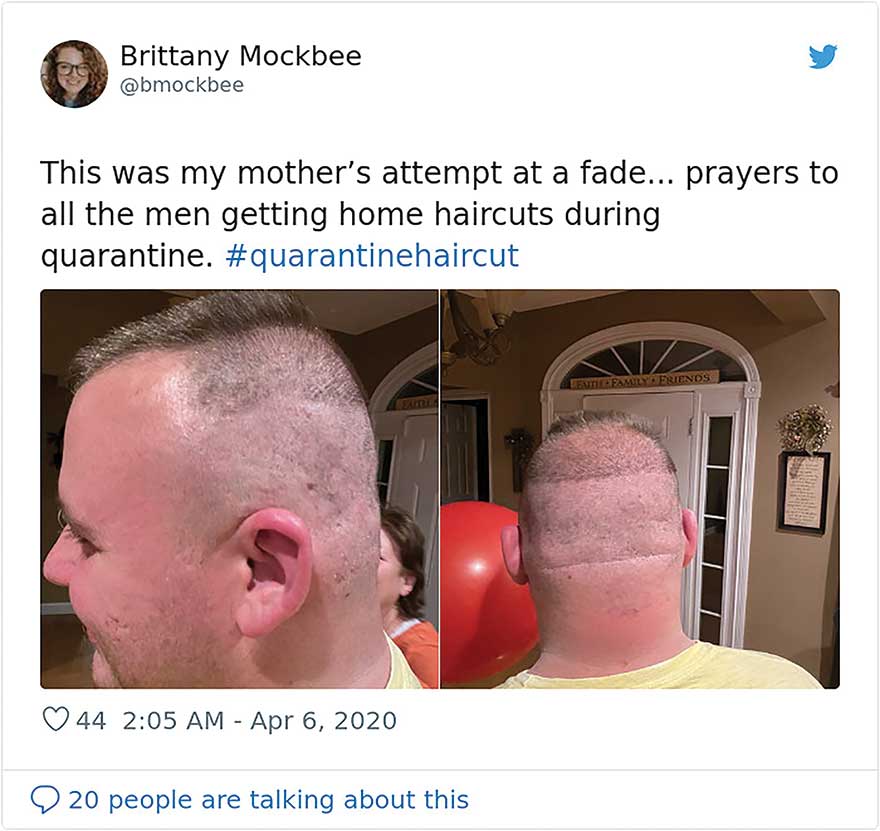 As hair salons and barbershops have been closed in the face of the coronavirus pandemic, people took matters into their own hands. Lucky for us, they are sharing the results of their haircuts on social media, proving just once again that hairdressers exist for a reason.

From poorly done fades to bald patches on the back of the head, these quarantine haircut fails are all kinds of hilarious. So scroll down below to see some unfortunate lockdown haircuts and vote for the ones that made you laugh.

Daughter Replaces Family Photos With Crayon Drawings One By One

Almost everyone is bored out of their minds during this quarantine. Well, Kristen Vogler found a way to keep herself busy. She decided to mess with her parents with an innocent prank by replacing their family photos with pictures drawn with crayons.

“So I love doing harmless pranks in general and was talking to my younger sister about a prank someone pulled that involved replacing family photos with Nicolas Cage. But I don’t have a colour printer, so knew that wouldn’t work. I happened to have a box of crayons, and it all sort of clicked from there. That was several months ago, however. It wasn’t until COVID-19 that I found myself with more time on my hands and I actually could start it,” Kristen told Bored Panda.

Unlock the flavours of cauliflower with a red pepper, olive and caper salsa, topped with almonds. Healthy and vegan, it makes a tasty light...
Read more

Taste Of Tradition And Luxury

Switzerland is a veritable paradise on Earth. That is undeniable. When travellers visit this paradise, they would also like to taste the best Swiss...
Read more