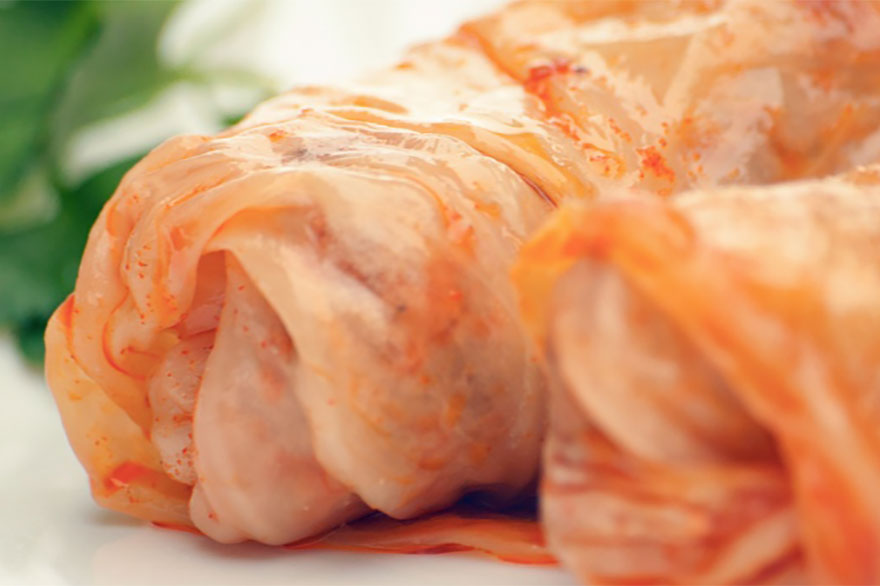 The irresistibly delicious and very spicy Serbian dishes are a feast for all senses. The people of Serbia enjoy cooking and eating, often traditional dishes made according to old family recipes which are passed on from one generation to the next.

The rich central daily meal in Serbia is always preceded by a tasty starter, followed by a broth or soup and then the main course made of vegetables and meat, boiled on slow-burning fire, baked in clay vessels or roasted.

The rivers that flow through Serbia are an inexhaustible source of fish. Like everywhere else in the world, there are many ways to prepare fish (smoked, fried, boiled, grilled) to make various flavoursome dishes.Freshly caught fish is cooked in a fish soup which is often served at the beginning of a large main meal in Serbia.

Chefs claim that the best fish soup is made with several high-quality fish species combined, with every experienced fisherman in Serbia using his own combination of spices to give their fish soup a characteristic aroma and pungency.Another dish that is highly recommended for fish lovers is fish paprikash. Made with fish and heavily spiced with red peppers, fish paprikash is a very piquant dish that is served on top of thick homemade noodles.

Serbia’s moderate climate is ideal for growing various types of vegetables. At home Serbian’s enjoy making a wide variety of dishes from peppers, while cucumbers, onions, garlic and various varieties of tomato often end up in fresh salads.

Cabbage grown in Serbia is of exquisite quality, while sauerkraut is a staple of winter diet. Although it can be eaten on its own as a salad, it is usually an ingredient in the traditional dishes without which Serbian cuisine would be difficult to imagine. Because of its thin and supple leaves, cabbage grown in the area of Futog, in the north of the country, is highly prized and has been given protected designation of origin.

The Futog cabbage makes the best sarma, a traditional Serbian dish made of meat, rice and sauerkraut leaves. Rice is stir-fried with onions and meat and then rolled in sauerkraut leaves and stewed on a slow-burning fire. This wonderful combination of flavours is truly unique and should not be missed.

Podvarak, another excellent combination of meat and vegetables, is made from thin strips of sauerkraut stir-fried with onions. Slices of bacon are also sometimes added to the mix for a richer flavour. The dish is then baked in the oven and served as a side dish to turkey or pork.

Sauerkraut and different meats are also used to make “wedding cabbage”, a soup-like dish that is highly prized in the south of Serbia. It is boiled in a large clay pot for several hours, with onions, spices and several types of meat (mutton, veal, pork and always some sort of cured meat) added to the mix. It is traditionally served in clay dishes, with a glass of good red wine.

Grilled food is synonymous with traditional Serbian cuisine. It is found on every dinner table and can be served on any occasion – from street vendors to family dinners and special events. Among the many grilled dishes such as ražnjići (grilled meat on a skewer), vešalice (boneless pork loin) and sausages, those made of mixed meats are firm favourites, with pljeskavica and ćevap occupying a special spot.Pljeskavica, a meat patty made of veal and spices, visually resembles a hamburger. There are several types to choose from: you can have a hot patty or a gourmet option with bacon.

Ćevap (kebab), a roll-shaped dish made of minced meat is a stable of Serbian diet. Made from minced veal or mixed meats and flavoured with a special combination of spices, it’s served in small buns with onions and yoghurt.Although ćevap is relished all over Serbia, those made in Novi Pazar and Leskovac are considered true delicacies.

Proja, a corn bread, is served as a side dish, but it can also be eaten on its own, with a cheese and kaymak spread. Proja is a staple of the typical Serbian starter – a plate full of nicely arranged, thin slices of smoked ham, bratwurst, sausages, boiled eggs, hot peppers and green onions.

Milk and dairy products have been a stable of Serbian cuisine since the Middle Ages. As a country with extensive cattle farming, Serbia is ideal for dairy production and cheesemaking. No wonder, then, that many regions of the country boast their authentic varieties. Thus, you can taste the cheeses of Sombor, Sjenica, Pirot and many more Serbian regions. Cheese is eaten with bread and proja, either as a starter or in a salad. Gibanica, a layered cheese pie, is held in high regard.

Gibanica – ready-made filo dough stuffed with plenty of cheese, eggs and kaymak, is a favourite starter in Serbia and is often eaten as a meal, particularly for breakfast. In addition to gibanica, there are many other filo dough pies to choose from in Serbia: meat pie, spinach pie, potato pie, mushroom pie, as well as pies with sweet, fruit-based filling.

This year, real estate turnover increased by one percent compared to 2021, and the total value of transactions in Serbia reached two billion euros,...
Read more

The Secretariat for Environmental Protection has announced that the process of placing under protection two new sites in Belgrade, the landscape of exceptional features...
Read more

Unlock the flavours of cauliflower with a red pepper, olive and caper salsa, topped with almonds. Healthy and vegan, it makes a tasty light...
Read more

Enjoy this super-healthy traditional ratatouille recipe for lunch or dinner, safe in the knowledge that it counts as four of your five-a-day Prep: 15 minsCook: 35 minsEasyServes 4 Ingredients 2...
Read more

An authentic Swedish strawberry cake is essential for a Midsummer feast. It is quite an easy cake to make, essentially a sponge cake filled...
Read more