Efficient Use Of Power And Body Balance

The Roman Walls of Lugo are the...
Read more

The most famous clock tower in the...
Read more

A scene from Only Fools and Horses starring Sir...
Read more 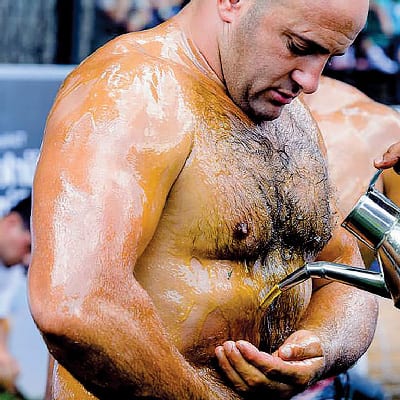 Initially, fights could go on for hours until one of the opponents finally won, so the oiling was used to protect the skin, it also makes it more difficult for the wrestler to get a grip on his opponent.

The trousers are called “kispet” and end below the knee; the aim is to overrule the opponent by pinning them belly up.

Wrestlers (called “Pehlivan” in Turkish) are in a way, actors in a theatre play showcasing their skills of legendary tragedy, ancestral passionate and sheer human force.

To spice up the duel, the fighters are regularly washed up with olive oil by the oiler (Yagci) during their wrestle, which makes the game even more challenging. 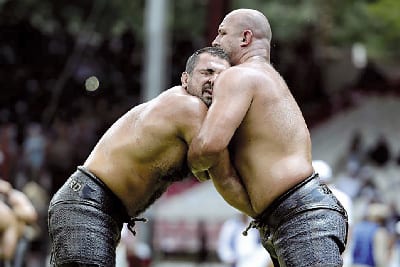 Precision, efficient use of power and body balance is more crucial than the use of force in this game.

The oil wrestling Master of Ceremonies( the “Cazgir”) who also acts as the referee would also recite the opener at the beginning of the game which would turn the game into an even more enjoyable show. He then would go on to motivate and encourage both wrestlers to dominate each other in the most poetic way.

Following the opener by Master of Ceremony, the wrestlers, totally washed/dipped/sprayed with olive oil, shirtless but in their leather shorts, embark on an ancient dance called “Peshrev” which is an ode to the brotherhood.

Here are the rules of Turkish oil wrestling.

Pehlivan, a Persian loanword, is used for describing a person with courage and bravery, but at the same time, this term is used for someone who has a solid and honest word.

The warriors who performed heroic missions and sports such as wrestlers, shooters, etc. were called “Pehlivan” in the Seljuk era which was then passed onto the Ottomans. 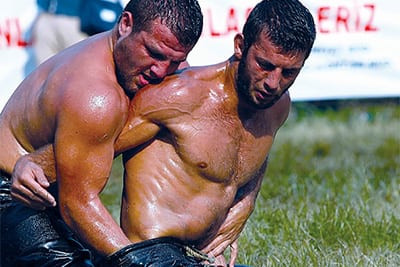 Pehlivan, a persian loanword, is used for describing a person with courage and bravery, but at the same time, this term is used for someone who has a solid and honest word

Turkish people love the sport of oil wrestling and the wrestlers would receive a lot of respect. This respect probably has its roots in the heroic sentiments of the Turkish people. It is important to note that the wrestlers also receive respect not only for their physical force, developed muscles and appear healthy but also their good behaviour, attitude, generous character and reliability.

At the time of the Ottomans, the matches would be held right outside the palace particularly during fairs, festivals and the royal weddings in the interest of charitable institutions, or in the halls of professional organizers. In some rural areas in Turkey, Turkish oil wrestling competitions are still held before weddings, during religious or traditional festivals.

Hope For A Peaceful Future

As Türkiye, we enter 2023 with awareness that it will be a unique year, especially for us, as we will be celebrating the centenary...
Read more

The Turkish army has appointed its first female general, it was announced in the country's Official Gazette. As reported by Anadolu Agency, Ozlem Yilmaz...
Read more

The move means 10 ambassadors — including those of Germany and the United States — are now just one step from expulsion after calling...
Read more