Back in 2001, AmCham Serbia was founded by ten companies with a clear vision and devotion to lead positive change for a better society in Serbia. Our founding members were committed to advocating a level playing field, the rule of law, and introducing the best American and European practices in order to enable a predictable and transparent business environment for every enterprise in Serbia

Fast forwarding to the present, AmCham has become the leading independent business hub and the common voice of key US, international and domestic players on the Serbian market. Year after year, we have been spearheading various long-delayed reform initiatives that have been in the focus of our members and underlined in our Annual Survey.

Some of the most impactful outcomes on which we worked actively are the New Law on Construction Permitting, aimed at simplifying and shortening the procedure for issuing construction permits, as well as the Labor Law reform which led to new employment and increased competitiveness, says Vera Nikolić Dimić, Executive Director of AmCham Serbia.

One of AmCham’s primary missions is to promote the best American business experiences. To what extent are such solutions applicable in Serbia (especially given the different financial possibilities); and where have you noted that they need still to be adopted?

– One of our main tasks is to promote American business values such as competition, transparency and free enterprise. Regardless of the significantly different circumstances between the US and Serbian economies, we feel these are excellent guiding principles that should facilitate the development and growth of our economy in order to reach its full potential.

AmCham member companies employ more than 100,000 citizens of Serbia and have to date invested more than €14 billion. To what extent do these statistics serve as a recommendation for others to firstly get interested and then come and invest?

– These figures together with success stories from businesses which already operate in Serbia are the best recommendation for all potential investors interested in our market. We are constantly looking for ways to promote positive examples from our members, which are some of the most prosperous companies in Serbia, throughout the international AmCham network.

During the more than a decade and a half of its existence, how much have the opinions of AmCham member companies changed when it comes to conditions for investing in Serbia?

– During the last five years, AmCham Serbia has been conducting an annual survey that serves as a barometer of the business climate – it clearly shows areas with progress, but more importantly, it highlights reform areas that need urgent action and change.

The most recent survey results indicated that more than two-thirds of our members were moderately satisfied with the business environment and expected improvements in the following four years.

Although most of them clearly indicated the need to show improvement in various regulatory areas, the general sentiment and future outlook are positive – around half of our members believe that their industries and individual companies will expand in the upcoming period, and thus have a need for raising the number of employees.

We are constantly looking for ways to promote positive examples from our members, which are some of the most prosperous companies in Serbia, throughout the international AmCham network

AmCham collaborates with the Government of Serbia and represents the healthy part of the Serbian economy. The dialogue between these parties last year resulted in moderate improvement in the health system and tax regulations, while the fight against the grey economy yielded even better results. What would it now be good to place in the focus of activities?

– We will continue to focus on shaping public policy regarding several priority issues. One of the priorities for our members is increasing predictability of law changes that have a clear impact on business, as well as avoiding enactment of laws through urgent procedures without any feedback from the private sector. 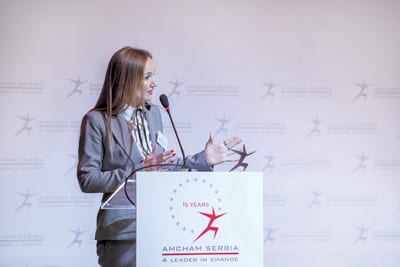 Furthermore, we would also like to see improvement on the reduction of the parafiscal burden, tax reform and state administration reform aimed at reducing bureaucracy. We have positive exactions regarding greater transparency through digital transformation, as well as continuing the combat against the grey economy.

There are also other priority areas that have the potential for improvement and positive impact on the business environment, such as bridging the gap between formal education and the labour market, environment and energy regulation improvement and removing trade barriers, to name a few.

Subsequently, we must not forget about previous reforms, so we are constantly monitoring implementation of the new regulations important for further economic development, such as Law on Construction Permitting, Labor Law and Law on Inspection Oversight.

How much does AmCham engage and succeed in giving more weight to the voice of the private sector in Serbia?

– One of AmCham’s core roles is serving as an efficient platform for voicing the needs and concerns of the private sector to the decision makers. Behind our every proposal stands the intention to improve the economic environment and remove obstacles for healthy growth of business which brings higher employment and tax income for the State.

There are many different AmCham formats, programs and events intended to streamline our advocacy efforts. However, the most important platform for the private sector to discuss high-level issues and set priorities with key representatives of the Government is our Lap Time Conference.

Through projects and workshops, AmCham devotes great attention to education, linking the economy with universities and schools. Testifying to this are the winners to date of the AmCham Hero Award. Does the academic community in Serbia properly utilize the opportunities for cooperation with large, international, Am- Cham member companies?

– Education plays a crucial role in the development of Serbian society and the economy. That is why AmCham is committed to improving the educational system, supporting talented individuals and institutions and connecting academia with the business sector. We are proud to say that this year’s AmCham Hero annual Award was presented to Dr Magdalena Đorđević from the Institute of Physics, in recognition of her efforts aimed at advancing and promoting science.

This award recognizes those who have shown determination in executing their vision into reality and thus making a positive impact on society. Some of the previous winners of AmCham Hero Award include the Mathematical Grammar School, for overall achievements in 2016, as well as Nordeus, for an innovative approach in innovative technologies in 2014.

In addition, four years ago we created our annual educational program – AmChamps, which opened doors for cooperation between the University of Belgrade and AmCham companies. This program is an excellent example of private and academic sector synergy, as it enables the exchange of knowledge between talented young leaders from AmCham member companies, most prospective students and expert lecturers with extensive experience from everyday practice.

So far, our AmChamps program has engaged more than 160 students and young managers who participated in discussions and lectures on key business topics, skill-improvement workshops, team building and much more.

AmCham brings together almost 200 American, international, and local companies. Does the increasing number of members serve to prove that AmCham’s mission – to further cooperation and friendship between the U.S. and Serbia in trade, investment and economic development – is being met to the satisfaction of all?

– Many important and valuable investors that operate in Serbia come from the U.S. We feel that there is enormous potential in further expanding our two countries’ economic cooperation, and we are active promoters of Serbia as a proven investment destination. Also, we are very interested and proud to follow the development of a new wave of Serbian IT companies, which are achieving global success, opening offices in the U.S. and are creating new opportunities for similar start-ups in the future.