Judging by the number of transportation projects currently in the pipeline, it seems that the Western Balkan countries have taken the opportunity to become part of the Trans-European Transport Network, and the EU’s internal transport market, seriously. However, “it is not the number of projects that matters in the end, but rather the quality of the projects,” emphasises our interlocutor – Maja Bakran-Marcich, Deputy Director-General of the European Commission’s Directorate General for Mobility and Transport.

Quality means good preparation to avoid delays in implementation. Good preparation and mature projects are much more attractive to potential investors, says Bakran-Marcich, continuing: “in the region, unfortunately, we see too many examples of projects languishing in the pipeline for many years, with no real development. In my opinion, one of the main priorities for the region, including Serbia, is to remove unnecessary administrative obstacles that delay the implementation of projects.”

What do you expect of the recently formed Permanent Secretariat of the Southeast Europe Transport Community?

– As Commissioner Bulc has mentioned on several occasions, if the Transport Community is a “game changer” for the whole region, then the Permanent Secretariat will be the instrument driving that change.

What the Secretariat can offer in particular is assistance in the implementation of EU legislation, the preparation of projects seeking financing, coordination of infrastructure planning and the development of transport strategies at the regional level. The objectives given to the Permanent Secretariat are clear: support the transformation of the transport system of the region with a view to its integration into the EU. Significant efforts need to be exerted when it comes to the alignment and implementation of legislation. Targets are very ambitious for both the EU and Western Balkan partners.

What would be this body’s role in adopting the legal framework related to interoperability, safety, security, public procurement and the environment, as well as regarding other related issues?

– The role of the Secretariat will be instrumental in providing assistance to all partners in these fields, in order to overcome the difficulties and prepare their respective transport systems for future integration into the EU’s system. The Permanent Secretariat’s mandate is not, however, to overcome deficiencies in the regional partners’ administrations when it comes to implementing this new regulatory framework, but rather to transfer experience and competences to these administrations. The alignment of transport legislation with the EU’s, driven by the Permanent Secretariat, will advance in parallel with the strengthening of the administrative capacity of each partner to cope with its obligations.

Our goal is to accelerate Europe’s transition towards zeroemission mobility, as well as to ensure a socially fair and competitive internal market for road transport services

As was noted recently, the European authorities would “work with China to plan platforms and corridors”. To what extent could that impact on the projects that China has with the region’s countries?

– China is an important investor – through loans – in infrastructure projects in the Western Balkans. In the meantime, Western Balkan partners have ratified the Transport Community Treaty, which represents a tool to foster their integration into the EU transport market. The Transport Community is basically a regulatory framework covering – among other things – the development of the Trans-European Transport network, through well identified priorities and the framing of infrastructure financing through the implementation of rules for sound project management, crucial among which are compliance with both public procurement and interoperability standards.

In short, it is crucial that potential Chinese investments (or those of any other stakeholders involved in the development of infrastructure in the region) fully respect these conditions. In such a case, and considering the very high level of investment needed for Western Balkan infrastructure development, we could be in a win-win situation. If these conditions are not met, it may indeed undermine the benefits that the Western Balkans could derive from their membership in the Transport Community. I would also like to remind your readers that Chinese investment typically comes in the form of loans, and not always with very favourable interest rates. On the EU side, while we are hoping to have an increase in pre-accession assistance amounts for the post-2020 EU budget, we have a number of other instruments at our disposal, with a number of them actually providing grants from the EU budget (like the Connecting Europe Facility). One element that clearly distinguishes financing from the EU budget is that projects need to be prepared according to the EU methodology, with detailed documentation submitted regarding elements such as economic and environmental sustainability, while tendering procedures need to follow the EU’s procurement rules. There is also a strong element of auditing in all the projects financed from the EU budget. 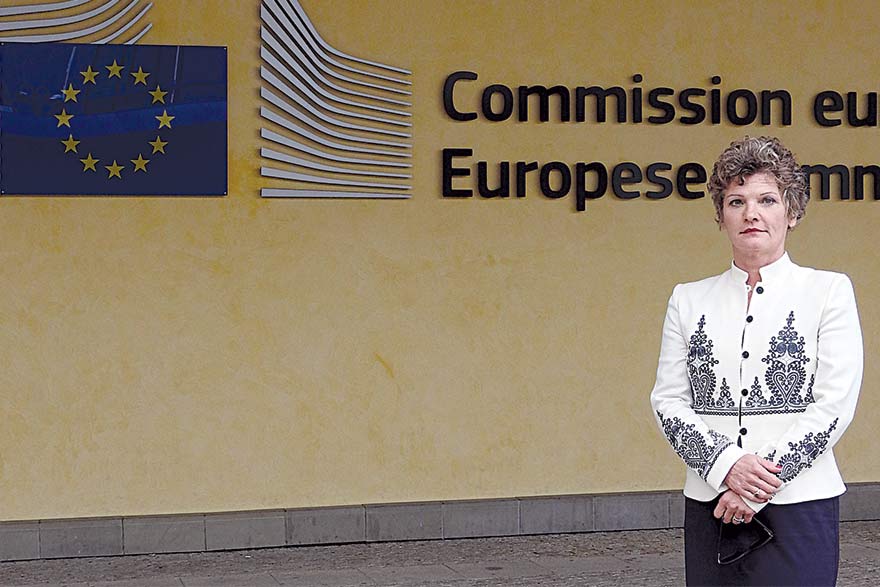 At the recent EU-China Summit (9th April 2019) we agreed with Chinese colleagues on the outline of key elements for the Joint Study on Sustainable Railway-based Comprehensive Transport Corridors between Europe and China. The Study will assess the current situation of railway-based corridors between Europe and China, analyse them and propose the most sustainable ones and related key projects. The geographical scope of the Study extends to countries located between the territories covered by the EU’s TEN-T policy, on the one hand, and the territory of the Peoples’ Republic of China, on the other. In other words, the Study will look into corridors connecting our extended TEN-T network (which includes the Western Balkans) and China. All countries will be consulted during the Study’s implementation.

The Second Western Balkan Summit is behind us. How would you assess its impact on the ‘connectivity agenda’ within the Western Balkans and with the EU?

– Many expectations regarding the implementation of reforms in the transport sector that were identified in the framework of the “connectivity agenda” have not yet been met. The dynamism generated by the Berlin Process has not been followed by concrete results. I regret that fact, but am confident that now – with a new cooperation framework in place – this process could be relaunched with more success. The next “Western Balkan Six” summit takes place in less than three months, and we plan to propose a very ambitious set of activities aimed at improving transport patterns in Southeast Europe as a contribution of the Transport Community to the “connectivity agenda”.

To what extent are these large projects, which aim to bring growth and create jobs, influenced by continuing political disputes among the Western Balkan countries?

– Large projects will bring growth and jobs if they are combined with an ambitious regulatory and reform policy, to which I would also add the need to resolve the ongoing disputes among regional partners.

The main goal of the Transport Community Treaty is to help our Western Balkan partners to align with EU rules. We are prepared and motivated to work towards fully connecting the Western Balkans with the EU

How would you asses the work done by the Serbian government in terms of turning transportation projects into development?

– Serbia has a very ambitious infrastructure programme and, indeed, new or upgraded infrastructure is needed for the country to be better connected with its neighbours and to respond to the increased mobility needs of businesses and citizens. It is also crucial to ensure that the new infrastructure is green, sustainable and digitalised.

That is why we are using our Connecting Europe Facility instrument to finance a number of large rail and inland waterway infrastructure projects in Europe. Serbia is the only non-EU country already profiting from this important financial instrument, as you have successfully secured financing for the upgrade of the Iron Gate I (Đerdap I navigational lock) on the Danube (the EU is contributing 40% of the total cost of €28.5 million).

However, I would once again like to insist that – beyond an infrastructure programme – it is necessary to implement ambitious transport policies aimed at bringing Serbia’s transport system to standards that are much closer to those of the EU. I would like to invite the Serbian Government to exert additional efforts to ensure that Serbia catches up with the EU in terms of road safety – multimodality – and the development of innovative and decarbonised transport solutions. It is only through a comprehensive approach to the transport system that Serbia can improve the situation. This, in a nutshell, is the reason we’ve set up a “transport community”, not an “infrastructure community”. It is therefore important to provide a global response to the transport of tomorrow, rather than focusing only on transport infrastructure which – per se – will not be sufficient to improve the situation.

As a former Head of the Directorate for the Coordination of European Affairs at the Ministry of European and Foreign Affairs of Croatia, what experience would you share with your Serbian counterparts when it comes to accession negotiation chapters 14 and 21?

– Both of these negotiating chapters are very demanding. On one hand, Chapter 14 covers roughly 20 per cent of the entire Acquis, while Chapter 21 is very important as it will define the EU’s transport, energy and digital network in Serbia. I still recall quite well the long meetings between Croatian negotiators and the European Commission on various transport-related issues. However, the most difficult part of the job when it comes to accession negotiations takes part in the candidate country. From the transport perspective, there are numerous stakeholders – just consider complex systems like national railways or the road transport sector. For Serbia, a country on the Danube, I would say that the inland waterways sector also has great potential. As regards air transport, due to the existing Agreement on the European Common Aviation Area, Serbia is quite advanced in terms of alignment with the EU Acquis. This was not the case at the time when Croatia was negotiating Chapter 14, as this agreement was not in force, so Croatia had to exert truly significant efforts to fulfil benchmarks in the area of air transport.

Some very important reforms lay ahead. Probably one of the most difficult ones will relate to the full liberalisation of the rail sector. Serbia is lagging behind in road safety, while passenger rights need further enhancements. Moreover, harmonisation in the road transport domain will also be very demanding, as there will be a number of new legislative acts entering into force in the EU during this period. I believe that you are monitoring the intensive debate underway in Europe following our proposal for some major reforms in the internal transport market entitled ‘Europe on the move – An agenda for a socially fair transition towards clean, competitive and connected mobility for all’. Our goal is to accelerate Europe’s transition towards zero-emission mobility, as well as to ensure a socially fair and competitive internal market for road transport services. As these proposals slowly become legislative acts over the next several years, it will mean that Serbia will also be obliged to adopt them. Through the Secretariat, we shall be able to offer assistance to Serbia in implementing all of these reforms.

Prerequisites for the Fast Development of the Country
Read more

Maja Bakran-Marcich, Deputy Director-general of the European Commission’s Directorate-General for Mobility and Transport

Transportation is About Values, Not Just Roads

Serbia, along with other countries of the Western Balkans, should take a firm commitment to reform its entire transport system. Having new infrastructure without having a regulatory framework that enables safe, interoperable and efficient transport operations is like having a brand new car without tyres: it looks good, but it isn't going anywhere
Read more

Serbia & China Have Never Been Closer

Thanks to company Dragon Maritime SEE, which is a general representative and agent of Cosco Shipping Lines, China's largest shipping company, the transport of goods - through imports to and exports from Serbia – has been eased considerably. Thanks to this company, Belgrade has become a regional hub for the development of intermodal transport
Read more

The Solution is in the Digitalising of Work Orders