Today, we face the global outbreak of...
Read more

Germany’s Resilience and Ability To Cope With The Unprecedented Crisis

The Federal Government and the governments of...
Read more

Serbia’s EU accession cannot happen until relations with Kosovo have been clarified. The sooner both sides – with the support of the EU – agree on a normalisation agreement, the better. Germany is very sceptical of changing borders along ethnic lines – Thomas Schieb

German Ambassador to Serbia H.E. Thomas Schieb is a diplomat who’s already familiar with the Balkans, having once served at the embassy in Sarajevo. In this interview for CorD, Ambassador Schieb says that he believes in the European perspective of the region and says that Serbia and all other countries have the support of Germany on that path, which isn’t at all easy.

Your Excellency, you have been Germany’s ambassador to Serbia since August. Upon departing, your predecessor – Axel Dittmann – said that relations between Germany and Serbia are at their historical best. What are your plans during your time in Serbia?

– German-Serbian political, economic and cultural relations are indeed excellent. The political exchange is at a very high level, economic ties are strong and the outlook is very positive. Since the year 2000, German companies have invested more than two billion euros in Serbia and created almost 50,000 jobs.

Germany continues to be Serbia’s top trade partner, with a bilateral trade volume of around €4.3 billion in 2017. Germany is also the largest bilateral donor in Serbia: More than €1.8 billion has been made available for various development projects in the past 18 years, with the priority areas being the environment, rule of law and sustainable economic development.

Cultural relations are also extensive and diverse. German is the second most popular foreign language in Serbian schools, while the number of participants in Goethe Institute language courses tripled in the last two years.

More than €1.8 billion has been made available for various development projects in the past 18 years, with the priority areas being the environment, rule of law and sustainable economic development. Cultural relations are also extensive and diverse

German scholarships are very popular among Serbian students: the German Academic Exchange Service (DAAD) offers scholarships for Serbian students seeking to study in Germany. In addition, Serbian graduates can spend three months doing an internship at the German Bundestag on an IPS scholarship. Young Serbs also have the opportunity to receive vocational training internships at German companies through the Zoran Đinđić Foundation.

It is a great pleasure for me to be German ambassador to Serbia, and I intend to work hard to make these excellent relations even better.

Your résumé states that you have experience in this region, having served at the German embassy in Sarajevo. How do you see the region of the Western Balkans today?

– Peace and stability in the Western Balkans are crucial. The region’s recent history has not been easy. There is still a lot of coping with the past, which sometimes endangers current regional relations. This is why reconciliation is essential. The future of the Western Balkans is the European Union, to paraphrase European Council President Donald Tusk. The path towards the EU is not easy, involving challenging political, economic and social transformation processes. However, the Western Balkan countries can count on the support of the EU and its member states in this endeavour. 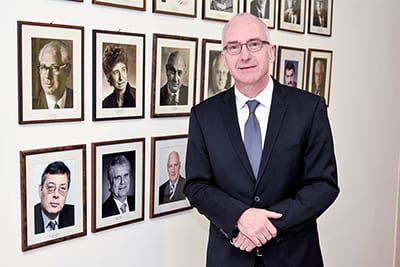 The EU accession process needs to be accompanied by regional cooperation. This includes, in particular, finding solutions to bilateral disputes and dedicating additional efforts to reconciliation. An important instrument in this is the so-called “Berlin Process”, a series of annual conferences of Western Balkan countries at which joint projects are launched in the areas of infrastructure, connectivity, security, economics and youth cooperation.

One of the success stories is the Regional Youth Cooperation Office (RYCO), which emerged from the Berlin Process and is also funded within the scope of German development cooperation. Youth from the six WEB-Partners meet regularly, organise study-trips and joint projects, and communicate intensively on issues of common interest. Those young people are the region’s future leaders, and having them work together now is actually a fantastic “investment” in a stable and prosperous WEB future.

To what extent is the continuation of economic cooperation conditioned by the quality of relations in the political domain; are those two elements connected?

– There is a close link between political reforms and economic development, as politics sets the framework for business activities and relations. Around 400 German companies are currently active in Serbia, and I’m pleased to see these activities grow steadily, in both quantitative and qualitative terms.

The results of this years’ Serbian-German Chamber of Commerce survey also show clearly that we are on the right track: 85% of participating companies confirmed that they would invest in Serbia again. Together with our Serbian partners, we want to strengthen this positive trend and develop our excellent economic ties even further. Continuing structural reforms, fostering the private sector and improving the business climate is important to leverage in that regard.

Strengthening the rule of law, particularly in terms of investment security and the fight against corruption, will benefit Serbian and foreign investors alike, and is key to achieving sustainable growth, creating attractive employment opportunities and improving living conditions here in Serbia. We are ready to continue supporting Serbia in this endeavour.

You arrived in Serbia during a period of intensive discussions regarding the resolution of the dispute between Belgrade and Pristina. It is believed here that, within the EU, Germany is advocating for this issue to be resolved as soon as possible, with a comprehensive legally- binding agreement as the conclusion. How do you view this process and what will you insist on?

– Germany fully supports the process of reaching the comprehensive normalisation of relations between Serbia and Kosovo. 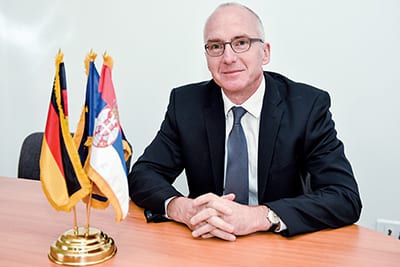 Germany supports the two sides in efforts to achieve normalisation, facilitated by EU High Representative Federica Mogherini. The full normalisation of relations would provide a vital contribution to regional security and stability. Moreover, the EU has made it clear that Serbia’s accession to the EU cannot take place until relations with Kosovo have been clarified.

Germany is trying to support this normalisation dialogue, for example in the context of economic cooperation. We welcome cooperation between the two chambers of commerce. And we are optimistic that the aforementioned RYCO will bring young Serbs and Kosovars together to help foster mutual understanding.

The quicker both sides – with the support of the EU – agree on a normalisation agreement, the better. Ultimately, however, this is solely in the hands of Belgrade and Pristina.

The EU accession process needs to be accompanied by regional cooperation. This includes, in particular, finding solutions to bilateral disputes and dedicating additional efforts to reconciliation. An important instrument in this is the so-called “Berlin Process”

The German Chancellor stated recently that Germany doesn’t support the idea of changing borders in the Western Balkans. Does that statement serve to reject all speculation about the division of Kosovo, which is allegedly supported by some of your partners in the international community?

You’ve arrived in Belgrade direct from New York, where you headed the political department of the German Mission to the UN. How do you see that global organisation today?

– We strongly believe that the United Nations is of fundamental importance for safeguarding the rules-based international order. 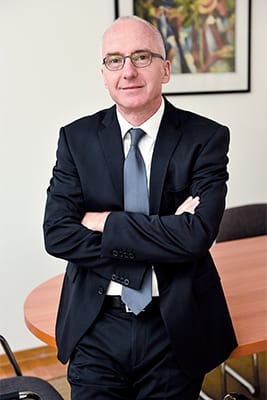 As the only truly universal body, it has a critical role to play in preventing or solving international conflicts – a role that has perhaps never been more important than it is today when the world seems to be in turmoil.

As one of its 10 non-permanent members in 2019 and 2020, Germany hopes to contribute to the important work of the UN Security Council, which is responsible for international peace and security.

Among other factors, we think the Security Council should focus on conflict prevention. I´ll give you an example: the climate. Climate change is one of the key challenges of the 21st century. We increasingly frequently see how the consequences of climate change intensify existing conflicts and have a destabilising effect on countries and entire regions. We, therefore, want to counteract climate risks as part of a preventative and stabilising foreign policy. It is important to build a toolbox to allow us to react as quickly as possible if we can foresee crises arising. This requires a better information base and risk analysis, including in the Security Council.

Many people consider that the UN has lost its strength, as evidenced by the inability to reach a compromise on burning issues like Syria, the Palestinian- Israeli dispute and the issue of Kosovo?

The world paid great attention to the latest meeting between Chancellor Merkel and Russian President Vladimir Putin, which media reported as being a long and detailed discussion. How would you define relations between Germany and Russia?

– Russia is an important partner to Germany, both politically and economically. Unfortunately, the annexation of Crimea by Russia, Russian action in Eastern Ukraine and Syria, Russian behaviour in dealing with the nerve poison attack in Salisbury and cyber attacks in Germany, presumably based on Russian sources, overshadow German-Russian relations. Nevertheless, it is important to remain in dialogue with Russia, since it is only together with Russia that major conflicts can be resolved.

How do you see the future of the EU and what do you consider as the greatest challenges in the process of strengthening and reforms within the Union?

– I am a convinced supporter of the “European idea” and have no doubt whatsoever that the EU will overcome all challenges. As a matter of fact, I think these recent challenges only show more clearly the necessity of a strong and united democratic alliance of states, i.e. the European Union. No single country can respond alone to the migration challenges, financial crisis or terrorism. The necessity for internal reforms is quite normal for such a complex organisation.

Many populist parties, even in EU countries, are offering seemingly easy solutions, playing with people’s fears, when in fact there are no ready-made solutions. Europeans need to be patient, to talk to each other and to believe in and stick to their common values: democracy, respect for human rights, liberty, equality, the rule of law and the desire for peace, stability and economic prosperity.